Recovering a biological reagent from a cell culture supernatant is one of the critical parts of the manufacturing procedure for biotech products and purification costs typically outweigh those of the upstream part of the production process.

Recovering a biological reagent from a cell culture supernatant is one of the critical parts of the manufacturing procedure for biotech products and purification costs typically outweigh those of the upstream part of the production process. For the production of monoclonal antibodies, Protein A resin accounts for some 10% of the cost while virus filtration can account for some 40% of the cost (Gottschalk, 2006).

Usually, the product is available in a very dilute form, e.g., 10 to 200 mg/L, but concentrations up to 500 to 800 mg/L can be reached (Berthold and Walter, 1994; Garnick et al., 1988). The prediction is that future development in cell culture technology through application of genetics and proteomics will result in product titers in the 5 to 10 g/L range which will challenge the capacity of the downstream processing unit operations (Werner, 2005).

A concentration step is often required to reduce handling volumes for further purification. Usually, the product subsequently undergoes a series of purification steps. The first step traditionally captures and initially purifies the product, the subsequent steps remove the bulk of the contaminants, and a final step removes all trace contaminants and variant forms of the molecule. Alternatively, the reverse strategy, where the main contaminants are captured and the product is purified in subsequent steps, might result in a more economic process, especially if the product is not excreted from the cells. In the former case the product will not represent more than 1% to 5% of total cellular protein and aspecific binding of the bulk of the protein in a product specific capture step will ruin its efficiency. If the bulk contaminants can be removed first, the specific capture step will be more efficient and smaller in size, thus cheaper, and chromato-graphic columns could be used. After purification, additional steps like formulation and sterilization are performed on the bulk product in order to obtain the required stable final product. Formulation aspects will be dealt.

When designing a purification protocol, the possibility for scaling up should be considered care-fully. A process that has been designed for small quantities is most often not suitable for large quantities for both technical and economic reasons. Developing a downstream process (i.e., the isolation and purification of the desired product) to recover a biological protein in large quantities occurs in two stages: design and scale-up.

Separating the impurities from the product protein requires a series of purification steps (process design), each removing some of the impurities and bringing the product closer to its final specification. In general, the starting feedstock contains cell debris and/or whole-cell particulate material that must be removed. Defining the major contaminants in the starting material is helpful in the downstream process design. This includes detailed information on the source of the material (e.g., bacterial or mammalian cell culture) and major contaminants (e.g., albumin orproduct analogs). Moreover, the physical character-istics of the product versus the known contaminants (thermal stability, isoelectric point, molecular weight, hydrophobicity, density, specific binding properties) largely determine the process design. Processes used for production of therapeutics should be reproducible and reliable. Methods used for recovery may expose the protein molecules to high physical stress (e.g., high temperatures and extreme pH) which alter the protein properties leading to appreciable loss in protein activity. Any substance that is used by injection must be sterile and free from pyrogens below a certain level depending on the product (limits are stated in the individual monographs which are to be consulted, such as European Pharmacopoeia: less than 0.2 mg/kg/body mass for intrathecal applica-tion). This necessitates aseptic techniques and proce-dures throughout with clean air and microbial control of all materials and equipment. During validation of the purification process it must also be demonstrated that potential viral contaminants can be removed (Walter et al., 1992). The purification matrices should be at least sanitizable or, if possible steam-sterilizable. For depyrogenation, the purification material must withstand either extended dry heat at 180 C or treatment with 1 to 2 M sodium hydroxide. If any material in contact with the product inadvertently releases compounds, these leachables must be analyzed and their removal by subsequent purification steps must be demon-strated during process validation. The increased use of plastic film based disposable production technol-ogy (e.g., sterile bags to store liquids and filter housings) has made these aspects more significant in the last 5 years and suppliers have reacted by providing a significant body of information regarding leachables and biocompatability for typical solutions used during processing. This problem of leachables is especially hampering the use of affinity chromato-graphy (see below) in the production of pharmaceu-ticals for human use. On laboratory scale affinity chromatography is an important tool for purification and the resulting product might be used for toxicity studies, but for human use the removal of any leached ligands has to be demonstrated. Because free affinity ligands will bind to the product, the removal might be very cumbersome.

Scale-up is the term used to describe a number of processes employed in converting a laboratory pro-cedure into an economical, industrial process. During the scale-up phase, the process moves from the laboratory scale to the pilot plant and finally to the production plant. The objective of scale-up is to produce a product of high quality at a competitive price. Since costs of downstream processing can be as high as 50% to 80% of the total cost of a product,practical and economical ways of purifying the product should be used. Superior protein purification methods hold the key to a strong market position (Wheelwright, 1993). 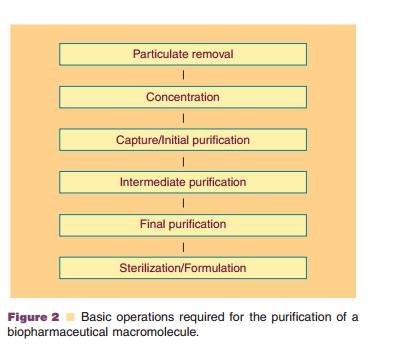 Basic operations required for a downstream purification process used for macromolecules from biological sources are shown in Figure 2.

As mentioned before, the design of downstream processing is highly product dependent. Therefore, each product requires a specific multistage purifica-tion procedure (Sadana, 1989). The basic scheme as represented in Figure 2 becomes complex. A typical example of a process flow for the downstream processing is shown in Figure 3. This scheme represents the processing of a glycosylated recombi-nant interferon (about 28 kDa) produced in mamma-lian cells. The aims of the individual unit operations are described. 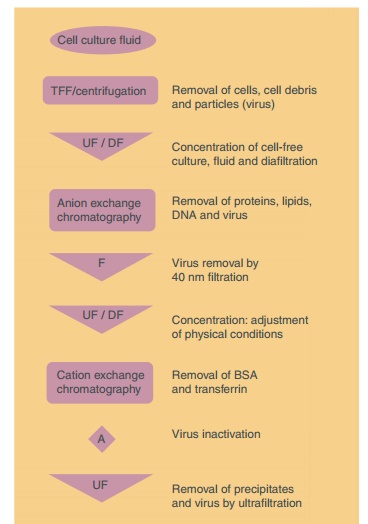 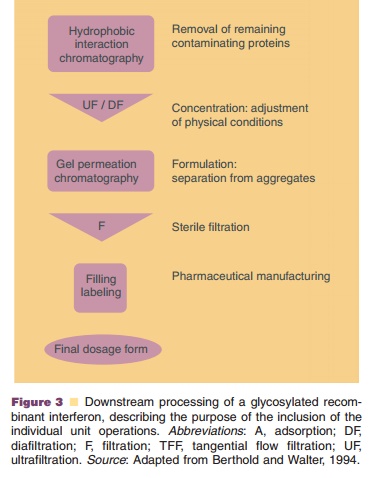 Once the volume and concentration of the product can be managed, the main purification phase can start. A number of purification methods are available to separate proteins on the basis of a wide variety of different physicochemical criteria such as size, charge, hydrophobicity and solubility. Detailed information about some separation and purification methods commonly used in purification schemes is provided below.