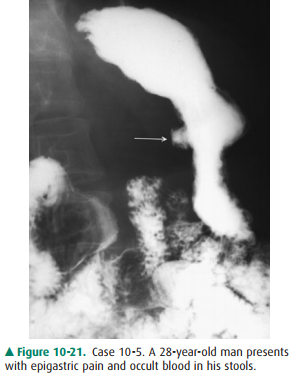 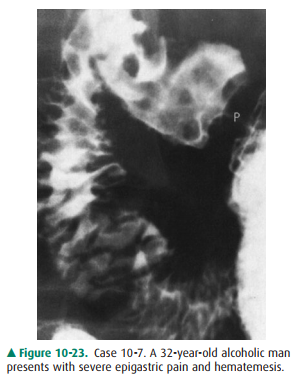 10-8. What is the most likely cause of the barium collection in the duodenal bulb in Case 10-8 (Figure 10-24; pa-tient is prone; d, duodenal diverticulum)? 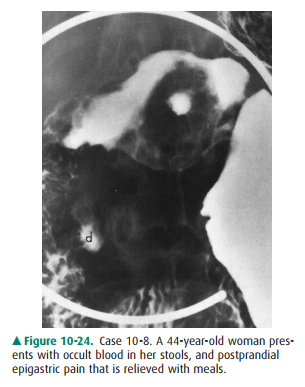 10-5. A smooth barium collection projects from the lesser curvature of the stomach and is associated with a lucent “collar” at the neck of the collection, a combination of findings most consistent with benign gastric ulcer (E is the correct answer to Question 10-5).

10-6. A polypoid lesion in the stomach is most likely a gas-tric neoplasm; the size of the lesion and the presence of a left lobe liver metastasis (arrow) would suggest a malignancy; a GI stromal tumor was diagnosed on pathologic examination (A is the correct answer to Question 10-6).

10-7. Multiple nodules are present in the duodenal bulb, some with central collections of barium, most indica-tive of duodenal erosions (B is the correct answer to Question 10-7).

10-8. The central collection of barium in the duodenal bulb is located on the anterior wall with the patient prone, thus localizing the lesion; duodenal ulcer with sur-rounding edema was seen at endoscopy (D is the cor-rect answer to Question 10-8).

Many causes of upper gastrointestinal bleeding can be de-tected on a radiographic examination of this portion of the gastrointestinal tract. As illustrated in the cases of this exer-cise, the most important causes are gastric or duodenal ero-sions and ulcers, and neoplasms of the stomach.

The radiographic features that suggest a benign gastric ulcer include (1) projection from the lumen of the stomach;smooth lucent line (Hampton line) or collar (as in this case) at the neck of the ulcer; (3) normal rugal folds that ra-diate to the edge of the ulcer collection; and (4) complete and permanent healing of the ulcer on repeat radiographic or en-doscopic examination of the stomach. If at least two or more of these findings are present, a confident radiographic diag-nosis of benign gastric ulcer is possible. A malignant gastric ulcer, which represents a small minority of all ulcers seen in the stomach, is suggested when the collection of barium within the ulcer is irregular and projects within the gastric lumen (ie, ulcerated neoplastic mass), a smooth line or collar at the ulcer margin is not present, or the rugal folds are nodu-lar and terminate abruptly (Figure 10-25). Lack of healing of a gastric ulcer is not a specific sign of malignancy. 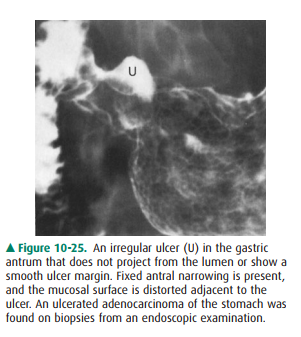 Adenocarcinoma remains the most common primary ma-lignancy of the stomach, but its incidence has decreased dra-matically in the United States. Gastric adenocarcinoma comprises about 95% of all primary malignancies of the stomach; lymphoma and GI stromal tumors account for most of the remainder. These gastric neoplasms show a wide variety of morphologic forms that include ulcerative, polypoid, infil-trative, or mixed varieties, depending on the type of tumor (Figure 10-26). 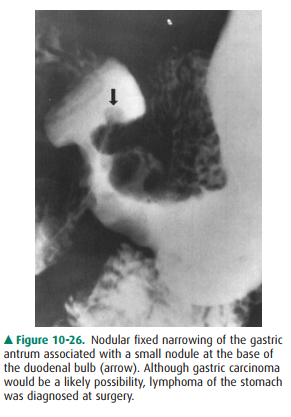 GIST is the most common mesenchymal tumor of the stomach and arises from the pacemaker cells of Cajal in the muscularis propria; special stains are used to make a specific diagnosis. GI stromal tumors may be small and polypoid, resembling benign gastric polyps; larger le-sions are often ulcerated and reveal malignant features, such as local invasion and metastases. GIST may be endoluminal or exophytic in location (Figure 10-27), although both com-ponents may be present (“dumbbell tumors”). 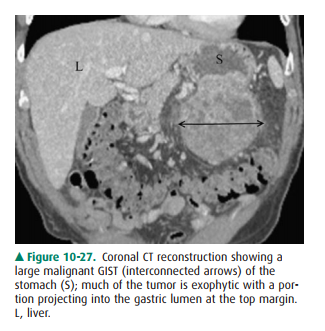 Erosions in the stomach and duodenum are a common cause of upper gastrointestinal bleeding. Because these ero-sions may be few in number and small in size, endoscopic ex-amination of the stomach and duodenum is more sensitive in their detection than radiologic evaluation. The radiographic features of duodenitis depend on the severity of the disease and include thickening and nodularity of the duodenal folds or the presence of erosions, which appear as punctuate collections of barium centered on a nodule. Brunner gland hyperplasia may have an appearance similar to duodenitis, but erosions are not seen, and patients may not be symptomatic. Carcinoma of the duodenal bulb is extremely rare and does not typically enter the differential diagnosis of inflammatory lesions in this anatomic region. Gastric erosions also appear as nodular de-fects, usually in the antrum of the stomach (Figure 10-28). 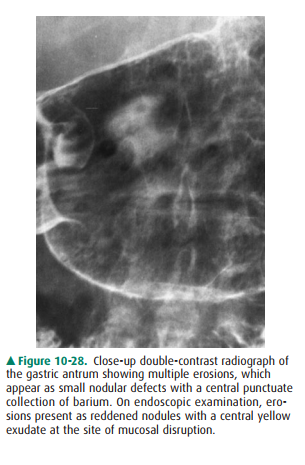 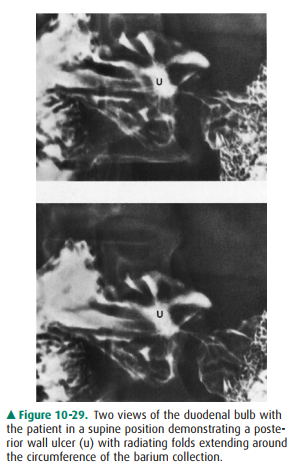