10-13. What is the most likely cause of the lucent band (in-terconnected arrows) involving the terminal ileum (TI) and causing small-bowel obstruction (arrow; C, cecum) in Case 10-13 (Figure 10-38)? 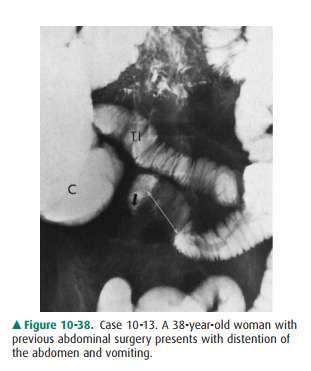 10-14. What is the most likely cause of the transition in small-bowel caliber (arrows), which is causing ob-struction on this sagittal reformatted CT scan in Case 10-14 (Figure 10-39)? 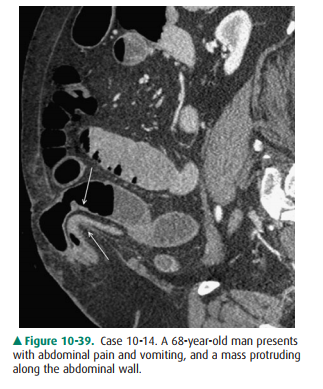 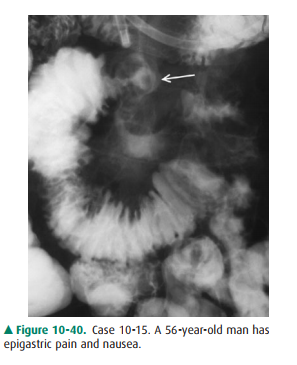 D.   Intussusception due to mass

10-16. What is the most likely cause of the multiple areas of angulation and narrowing (arrows) causing small-bowel obstruction in Case 10-16 (Figure 10-41)? 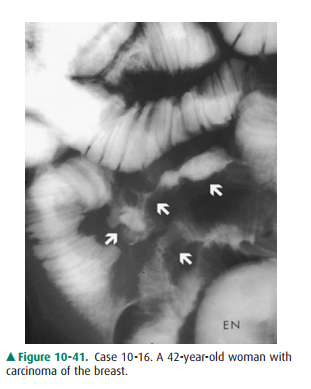 10-13. The lucent band is due to adhesions causing a distalsmall-bowel obstruction (B is the correct answer to Question 10-13).

10-15. The irregular, angulated mass narrowing is likely due to a small-bowel malignancy; a carcinoid tumor was found at surgery. A polypoid mass with intussuscep-tion would appear as a focal dilatation of the bowel (D is the correct answer to Question 10-15).

10-16. Multiple sites of narrowing and angulation (arrows) are causing small-bowel obstruction; in a patient with a known malignancy, peritoneal metastasis with serosal bowel involvement is the most likely cause (C is the correct answer to Question 10-16).

The most common causes of small-bowel obstruction are ad-hesions, hernias, and primary or secondary neoplasms of the small intestine. Although barium examinations of the small bowel have been used traditionally to evaluate small-bowel obstruction, more modern imaging using a variety of CT and MR techniques (as discussed previously) is now used more often, particularly in the presence of high-grade bowel ob-struction.

Peritoneal adhesions are most often the cause of small-bowel obstruction in adults. Previous abdominal surgery is the usual explanation for development of peritoneal adhe-sions. Focal small-bowel obstruction is diagnosed on con-trast examination and also with cross-sectional imaging (ie, CT or MR) by demonstrating an area of caliber transition from dilated to normal-caliber bowel. If angulated loops are seen at a caliber transition in the absence of a mass effect, ad-hesions are the likely cause of obstruction; these criteria are useful whether traditional contrast examination or CT imag-ing is being used for evaluating patients with suspected small-bowel obstruction (Figure 10-42). 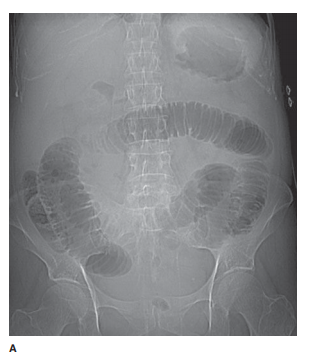 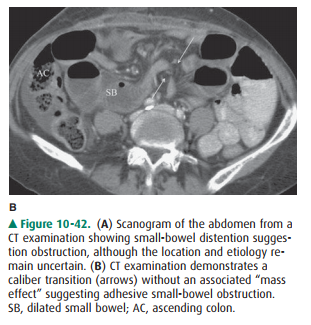 Abdominal hernias are now considered the second most common cause of small-bowel obstruction, and their preva-lence and location will vary depending on the age and sex of the patient. External hernias are the most common types, with the inguinal canal predominating in the male popula-tion; however, hernias may occur in other areas of the ab-domen, such as in the umbilical and paraumbilical regions. Hernias can also be seen more laterally (eg, Spigelian type at the lateral margin of the rectus muscle) and may be associ-ated with incisional scars from previous abdominal surgery. CT examination of the abdomen with the ability to reformat in a variety of planes (ie, coronal and sagittal) is an ideal im-aging modality for evaluation of abdominal hernias. Internalhernias are much less common, but may also be a cause of bowel obstruction.

Small-bowel malignancies were discussed briefly in the previous exercise. Adenocarcinoma of the small bowel oc-curs most often in the duodenum and jejunum and is muchless common in the ileum. The morphologic appearance of adenocarcinomas of the small intestine consists of poly-poid, ulcerative, stenosing, and infiltrative forms, which are similar to their counterparts in the stomach and colon. Pri-mary lymphomas of the small bowel are a heterogeneous group of tumors, and controversy persists regarding defini-tion of primary and secondary forms of this neoplasm. Lymphomas may involve any level of the small intestine but are most common in the ileum; the gross pathologic pat-terns include nodular or polypoid masses, constricting le-sions that resemble carcinoma, or a more diffusely nodular or infiltrative process. 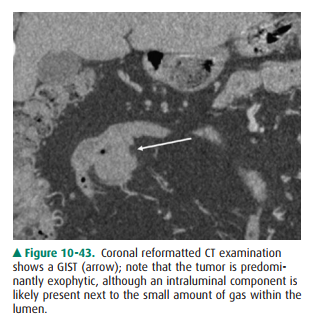 Carcinoid tumor and malignant GIST are the other two primary malignancies seen in the small bowel. GIST usu-ally occurs as a single lesion and is most often found in the jejunum and ileum. Pathologically, this tumor typically presents as a polypoid mass with an intraluminal and ex-tramural component; a bulky, irregular mass is common, and ulceration often occurs (Figure 10-43). Special im-munohistochemical stains are used to identify the specific tissue types of these neoplasms (ie, c-kit or CD117 positiv-ity). Carcinoid tumors arise from enterochromaffin or similar types of cells, and more than 90% originate in the gastrointestinal tract. Most carcinoid tumors of the small bowel are located in the ileum. Their radiologic appear-ances reflect their broad pathologic morphology, and they may present as single or multiple polypoid lesions or as focal stenosis leading to partial obstruction; angulation and kinking of bowel loops may occur with a desmoplastic reaction and cause a mass that is best appreciated on cross-sectional imaging (Figure 10-44). 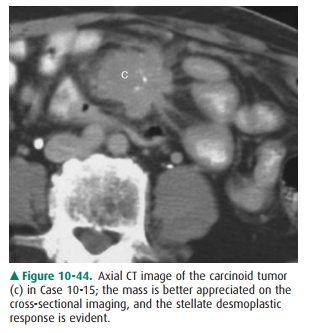 Secondary malignancies involving the small bowel are much more common than the primary types. The three routes of secondary malignancy that can spread to the small intestine include (1) hematogenous metastases, with carcinoma of the breast, lung, and melanoma being the most common; (2) in-traperitoneal seeding of tumor from elsewhere within the ab-domen; and (3) direct contiguous invasion of bowel (most often seen with pancreatic carcinoma and pelvic malignan-cies). Carcinoma of the cervix, endometrium, and ovary often affects the distal small bowel by intraperitoneal seeding or di-rect invasion; the colon may also be involved, and radiographic evaluation of these patients may be best performed with a bar-ium enema, with one goal being reflux into the ileum (Figure 10-45). Presently, CT and MR imaging of the abdomen and pelvis have emerged as the usual modalities for assessing and following patients with intra-abdominal malignancies. 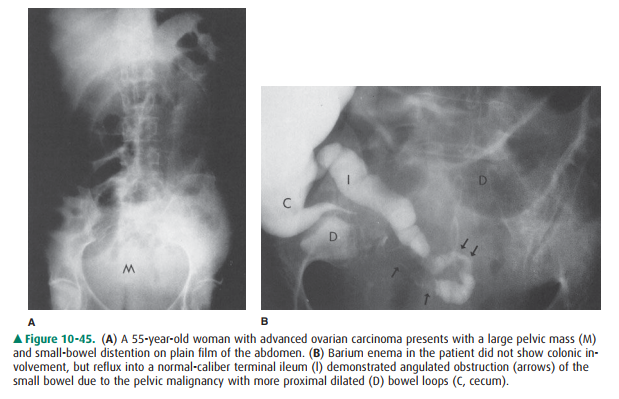