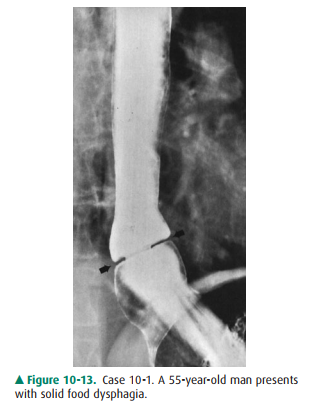 A.   Carcinoma of the esophagus

D.   Achalasia of the esophagus 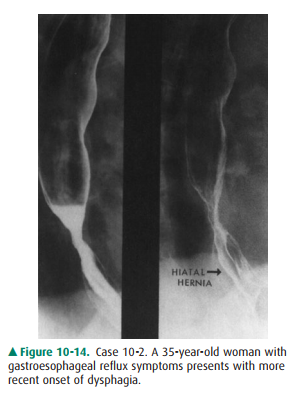 squamous-cell carcinoma (A is the correct answer to Question 10-3). 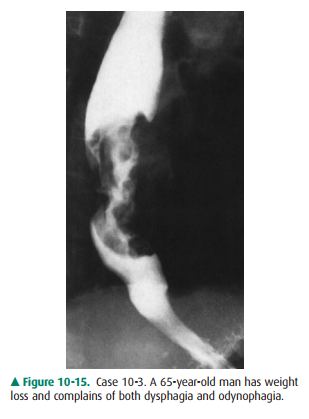 10-4. Esophageal aperistalsis, tapered narrowing at the lower end of the esophagus, and esophageal dilatation are features of idiopathic achalasia (D is the correct an-swer to Question 10-4). 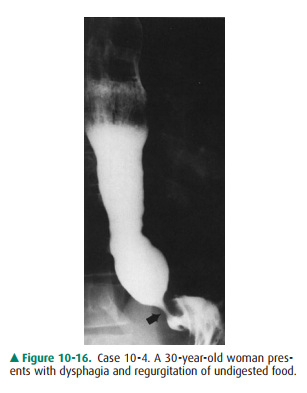 Dysphagia is a frequent indication for radiographic or endo-scopic examination of the esophagus. The most common esophageal causes of dysphagia are shown in the case presen-tations in this exercise.

The lower esophageal mucosal ring is an acquired thin, annular membrane of unknown cause that demarcates the esophagogastric junction and is a sign of hiatal hernia. More importantly, the mucosal ring is probably the most common cause of solid food dysphagia seen in adults (the so-called steakhouse syndrome). Nearly 60 years ago, Schatzki de-scribed the association of the mucosal ring, which often bears his name, with dysphagia and determined that the prevalence of dysphagia related to the caliber of the ring. Rings greater that 20 mm in diameter rarely cause symp-toms; rings less than 14 mm in caliber are nearly alwayssymptomatic, whereas mucosal rings 14 to 20 mm in diame-ter cause dysphagia in about half of patients. The mucosal ring is best detected by radiographic examination, and the use of a solid bolus, such as a portion of a marshmallow, op-timizes evaluation of these rings and verifies the structure as a cause of dysphagia (Figure 10-17). 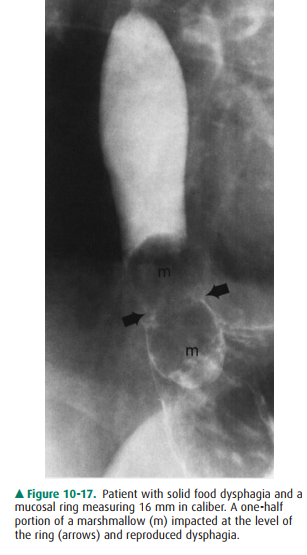 Peptic stricture of the esophagus is a complication of re-flux esophagitis and is the second most common benign cause of dysphagia. Reflux strictures typically occur at the esophagogastric junction and are associated with a hiatal hernia in virtually all patients. Peptic strictures show a variety of morphologic appearances from a smooth, tapered nar-rowing to an annular configuration that may resemble a mu-cosal ring. Irregularity of the stricture margin may also be seen and must be differentiated from an esophageal malignancy. Barrett esophagus is another complication of gastroesophageal reflux disease and is suggested when a peptic stricture is lo-cated above the esophagogastric junction (Figure 10-18); adenocarcinoma is the most serious complication of Barrett esophagus and has increased dramatically in recent decades. 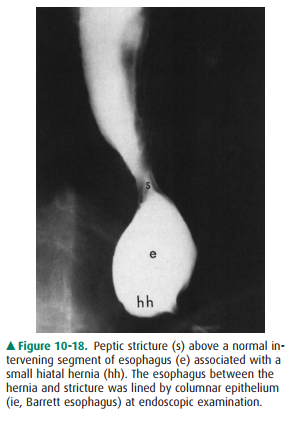 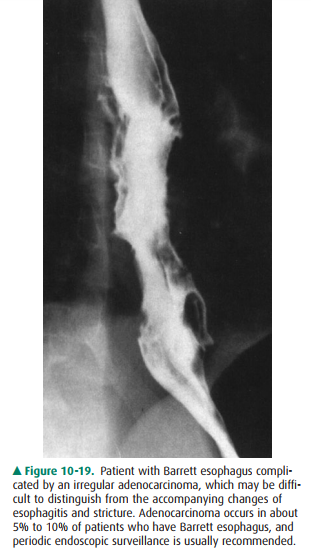 Idiopathic achalasia is a primary motility disorder of the esophagus of unknown cause that presents with dysphagia, regurgitation, and weight loss occasionally. The findings on esophageal manometry include total absence of primary esophageal peristalsis (aperistalsis), and a dysfunctional lower esophageal sphincter (ie, failure of relaxation). The radiographic features mirror the manometric findings; aperi-stalsis is observed and the lower end of the esophagus has a smooth, tapered or beaklike appearance. In achalasia, hiatal hernia is an uncommon observation, which is usually seen in patients with peptic stricture or scleroderma of the esopha-gus. An important differential diagnosis is secondary achala-sia due to an infiltrative gastric adenocarcinoma (Figure 10-20); patients are usually older and have a more abrupt onset of symptoms, which often include odynophagia.