Spontaneous, Continuous Action Potentials in the Ganglion Cells. It is from the ganglion cells that the long fibersof the optic nerve lead into the brain.

Excitation of the Ganglion Cells

Spontaneous, Continuous Action Potentials in the Ganglion Cells. It is from the ganglion cells that the long fibersof the optic nerve lead into the brain. Because of the distance involved, the electrotonic method of conduc-tion employed in the rods, cones, and bipolar cells within the retina is no longer appropriate; therefore, ganglion cells transmit their signals by means of repet-itive action potentials instead. Furthermore, even when unstimulated, they still transmit continuous im-pulses at rates varying between 5 and 40 per second. The visual signals, in turn, are superimposed onto this background ganglion cell firing.

Transmission of Changes in Light Intensity—The On-Off Response. As noted previously, many ganglion cells arespecifically excited bychanges in light intensity. This is demonstrated by the records of nerve impulses in Figure 50–13. The upper panel shows rapid impulses for a fraction of a second when a light is first turned on, but decreasing rapidity in the next fraction of a second. The lower tracing is from a ganglion cell located lateral to the spot of light; this cell is markedly inhibited when the light is turned on because of lateral inhibition. Then, when the light is turned off, opposite effects occur. Thus, these records are called “on-off” and “off-on” responses. The opposite directions of these responses to light are caused, respectively, by the depolarizing and hyperpolarizing bipolar cells, and the transient nature of the responses is probably at least partly generated by the amacrine cells, many of which have similar transient responses themselves. 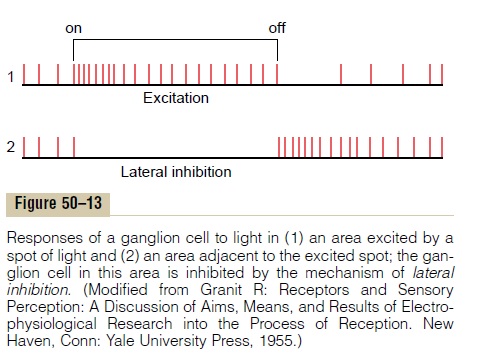 This capability of the eyes to detect change in light intensity is strongly developed in both the peripheral retina and the central retina. For instance, a minute gnat flying across the field of vision is instantaneously detected. Conversely, the same gnat sitting quietly remains below the threshold of visual detection.

Many ganglion cells respond mainly to contrast borders in the scene. Because this seems to be the major means by which the pattern of a scene is trans-mitted to the brain, let us explain how this process occurs.

When flat light is applied to the entire retina—that is, when all the photoreceptors are stimulated equally by the incident light—the contrast type of ganglion cell is neither stimulated nor inhibited. The reason for this is that signals transmitted directly from the photore-ceptors through depolarizing bipolar cells are excita-tory, while the signals transmitted laterally through hyperpolarizing bipolar cells as well as through horizontal cells are mainly inhibitory. Thus, the direct excitatory signal through one pathway is likely to be neutralized by inhibitory signals through lateral path-ways. One circuit for this is demonstrated in Figure 50–14, which shows at the top three photoreceptors. The central receptor excites a depolarizing bipolar cell. The two receptors on each side are connected to the same bipolar cell through inhibitory horizontal cells that neutralize the direct excitatory signal if all three receptors are stimulated simultaneously by light. 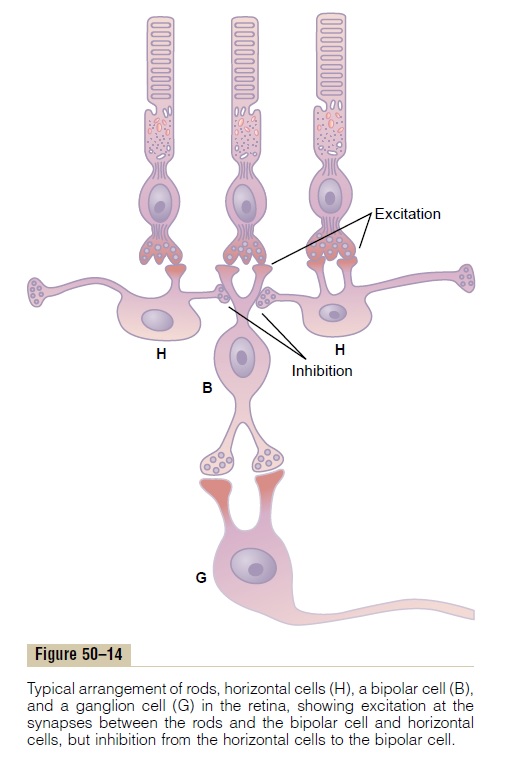 Now, let us examine what happens when a contrast border occurs in the visual scene. Referring again to Figure 50–14, assume that the central photoreceptor is stimulated by a bright spot of light while one of the two lateral receptors is in the dark. The bright spot of light excites the direct pathway through the bipolar cell. The fact that one of the lateral photoreceptors is in the dark causes one of the horizontal cells to remain unstimulated. Therefore, this cell does not inhibit the bipolar cell, and this allows extra excitation of the bipolar cell. Thus, where visual contrasts occur, the signals through the direct and lateral pathways accen-tuate one another.

In summary, the mechanism of lateral inhibition functions in the eye in the same way that it functions in most other sensory systems—to provide contrast detection and enhancement.

Transmission of Color Signals by the Ganglion Cells

A single ganglion cell may be stimulated by several cones or by only a few. When all three types of cones— the red, blue, and green types—stimulate the same ganglion cell, the signal transmitted through the gan-glion cell is the same for any color of the spectrum. Therefore, the signal from the ganglion cell plays no role in the detection of different colors. Instead, it is a “white” signal.

Conversely, some of the ganglion cells are excited by only one color type of cone but inhibited by a second type. For instance, this frequently occurs for the red and green cones, with red causing excitation and green causing inhibition, or vice versa.

The same type of reciprocal effect occurs between blue cones on the one hand and a combination of red and green cones (both of which are excited by yellow) on the other hand, giving a reciprocal excitation-inhibition relation between the blue and yellow colors.

The importance of these color-contrast mechanisms is that they represent a means by which the retina itself begins to differentiate colors. Thus, each color-contrast type of ganglion cell is excited by one color but inhib-ited by the “opponent” color. Therefore, color analysis begins in the retina and is not entirely a function of the brain.