From the preceding sections, we have learned that different cones are sensitive to different colors of light.

From the preceding sections, we have learned that different cones are sensitive to different colors of light. This section is a discussion of the mechanisms by which the retina detects the different gradations of color in the visual spectrum.

All theories of color vision are based on the well-known observation that the human eye can detect almost all gradations of colors when only red, green, and blue monochromatic lights are appropriately mixed in different combinations. 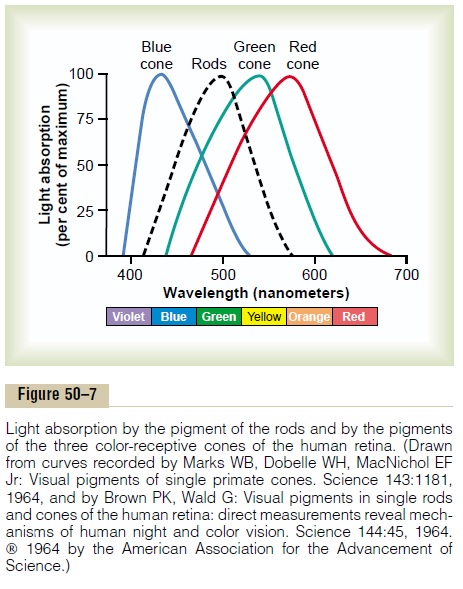 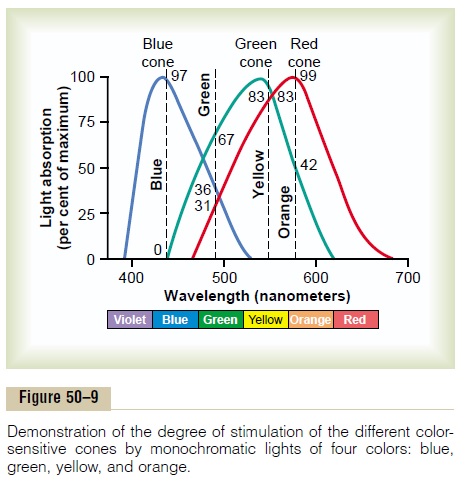 Perception of White Light. About equal stimulation ofall the red, green, and blue cones gives one the sensa-tion of seeing white. Yet there is no single wavelength of light corresponding to white; instead, white is a com-bination of all the wavelengths of the spectrum. Fur-thermore, the perception of white can be achieved by stimulating the retina with a proper combination of only three chosen colors that stimulate the respective types of cones about equally. 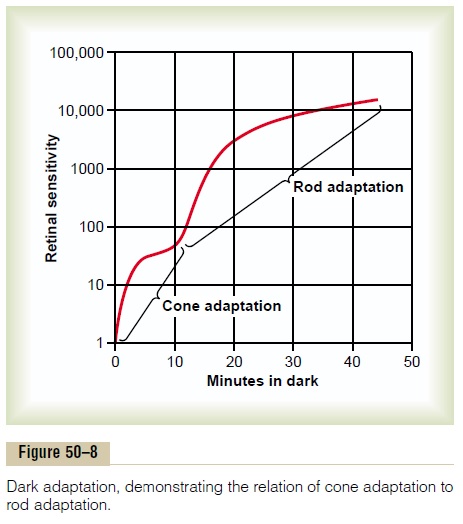 Red-Green Color Blindness. When a single group of color-receptive cones is missing from the eye, the person is unable to distinguish some colors from others. For instance, one can see in Figure 50–9 that green, yellow, orange, and red colors, which are the colors between the wavelengths of 525 and 675 nanometers, are normally distinguished from one another by the red and green cones. If either of these two cones is missing, the person cannot use this mechanism for distinguishing these four colors; the person is especially unable to distinguish red from green and is therefore said to have red-green colorblindness.

Red-green color blindness is a genetic disorder that occurs almost exclusively in males. That is, genes in the female X chromosome code for the respective cones. Yet color blindness almost never occurs in females because at least one of the two X chromosomes almost always has a normal gene for each type of cone. Because the male has only one X chromosome, a missing gene can lead to color blindness.

Because the X chromosome in the male is always inherited from the mother, never from the father, color blindness is passed from mother to son, and the mother is said to be a color blindness carrier; this is true in about 8 per cent of all women.

Blue Weakness. Only rarely are blue cones missing,although sometimes they are underrepresented, which is a genetically inherited state giving rise to the phe-nomenon called blue weakness.

If one studies these charts while at the same time observing the spectral sensitivity curves of the different cones depicted in Figure 50–9, it can be readily under-stood how excessive emphasis can be placed on spots of certain colors by color-blind people.