Each retina contains about 100 million rods and 3 million cones; yet the number of ganglion cells is only about 1.6 million.

Each retina contains about 100 million rods and 3 million cones; yet the number of ganglion cells is only about 1.6 million. Thus, an average of 60 rods and 2 cones converge on each ganglion cell and the optic nerve fiber leading from the ganglion cell to the brain. 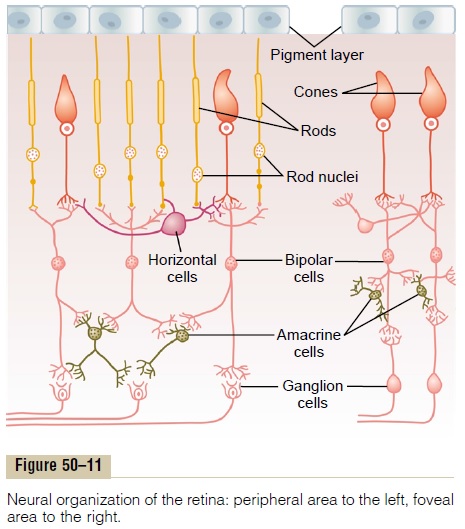 Another difference between the peripheral and central portions of the retina is the much greater sen-sitivity of the peripheral retina to weak light. This results partly from the fact that rods are 30 to 300 times more sensitive to light than cones are, but it is further magnified by the fact that as many as 200 rods converge on a single optic nerve fiber in the more peripheral portions of the retina, so that signals from the rods summate to give even more intense stimula-tion of the peripheral ganglion cells and their optic nerve fibers.

Three Types of Retinal Ganglion Cells and Their Respective Fields

There are three distinct types of ganglion cells, desig-nated W, X, and Y cells. Each of these serves a differ-ent function.

Transmission of Rod Vision by the W Cells. The W cells, con-stituting about 40 per cent of all the ganglion cells, are small, having a diameter less than 10 micrometers, and they transmit signals in their optic nerve fibers at the slow velocity of only 8 m/sec. These ganglion cells receive most of their excitation from rods, transmitted by way of small bipolar cells and amacrine cells. They have broad fields in the peripheral retina because the dendrites of the ganglion cells spread widely in the inner plexiform layer, receiving signals from broad areas.

On the basis of histology as well as physiologic experiments, the W cells seem to be especially sensi-tive for detecting directional movement in the field of vision, and they are probably important for much of our crude rod vision under dark conditions.

Transmission of the Visual Image and Color by the X Cells. Themost numerous of the ganglion cells are the X cells, representing 55 per cent of the total. They are of medium diameter, between 10 and 15 micrometers, and transmit signals in their optic nerve fibers at about 14 m/sec.

The X cells have small fields because their dendrites do not spread widely in the retina. Because of this, their signals represent discrete retinal locations.There-fore, it is mainly through the X cells that the fine details of the visual image are transmitted. Also, because every X cell receives input from at least one cone, X cell transmission is probably responsible for all color vision.

Function of the Y Cells to Transmit Instantaneous Changes in the Visual Image. The Y cells are the largest of all, up to35 micrometers in diameter, and they transmit their signals to the brain at 50 m/sec or faster. They are the least numerous of all the ganglion cells, representing only 5 per cent of the total. Also, they have broad den-dritic fields, so that signals are picked up by these cells from widespread retinal areas.

The Y ganglion cells respond, like many of the amacrine cells, to rapid changes in the visual image— either rapid movement or rapid change in light inten-sity—sending bursts of signals for only small fractions of a second. These ganglion cells presumably apprise the central nervous system almost instantaneously when a new visual event occurs anywhere in the visual field, but without specifying with great accuracy the location of the event, other than to give appropriate clues that make the eyes move toward the exciting vision.