A number of systems for injection of oxygen gas are available.

A number of systems for injection of oxygen gas are available. What distinguishes the methods from aeration is that the gas is injected under pressure, so the equipment is pressurized. Injection systems can be divided into high- and low-pressure systems, where the pressure in the former is above 1 bar.

Packed column: A simple way to add oxygen to thewater is to substitute the air in a packed column aerator by pure oxygen, and aerate in a pure oxygen atmosphere (Fig. 8.9); there is no excess pressure. Under practical conditions, an oxygen saturation of two to three times the normal value is achievable by changing the atmosphere from air to pure oxygen. Theoretically the oxygen content should be up to five times as high as in air, but the time available for the gas to transfer into the water is normally a limitation. The air in a column aerator can easily be exchanged with pure oxygen by placing the lower end of the column in the water and feeding pure oxygen gas into the lower part ofthe column so that it flows up against the descend-ing water. This results in good mixing of the water and oxygen. Eventually surplus oxygen that reaches the top of the column and is not dissolved in the water can be withdrawn through a special valve and recycled through the column inlet water to prevent any loss of pure oxygen gas. The amount of oxygen that can be transferred into the water and the efficiency of oxygen supply can be increased if the column is pressurized; here the column is closed at the top and bottom. The pressure in such a system normally varies from 0.2 to 0.5 bar excess pressure. 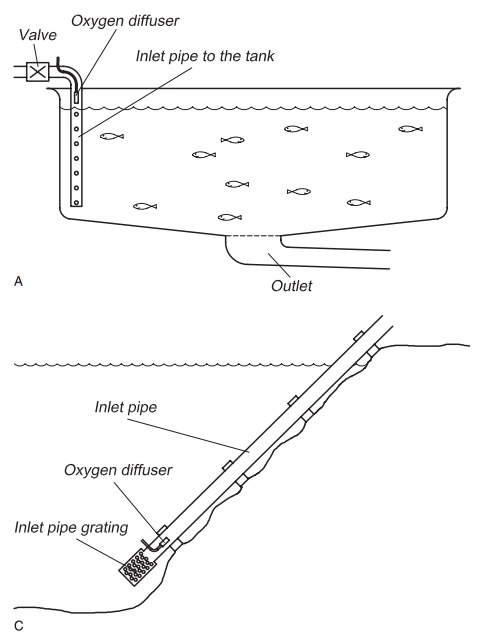 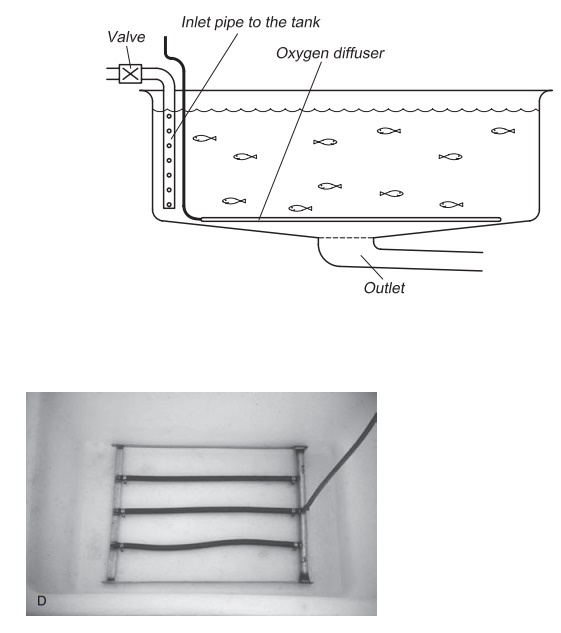 Diffuser: A diffuser may also be used to supplyoxygen gas to the water, in the same way that air is supplied for aeration (Fig. 8.9). The efficiency depends on the depth at which the oxygen is added; a greater depth will result in increased efficiency (see Section 8.3.1, Dalton’s law), a depth of at least 2 m being recommended. The diffusers can be either tubes or ceramic. It is important it that the oxygen gas leaves the diffuser as small bubbles, because then better mixing is achieved as a result of increased contact area and reduced rise veloc-ity.15,23 Usually diffusers are used to add oxygen to the production units in connection with transport or as security systems. This is normal procedure almost all fish farms and for all fish transport. When using diffusers, the oxygen is normally supplied from gas bottles because the amounts are quite small. Diffusers are also used in normal production; one method is to have some central oxygenation of the incoming water and treat each tank individually by having a diffuser on the tank bottom.

Diffuser placed directly in the inlet pipe: If oxygenis to be added to the fish tank directly through the inlet pipe, a diffuser is placed inside the inlet pipe after the regulating valve (Fig. 8.9). Such an oxy-genation system requires a correct design of inlet pipe to the tank. The water depth in the tank ought to be more than 1.5 m to give satis-factory pressure. The highest efficiency is seen when using this method in seawater because oxygen is more soluble in seawater than in freshwater. With a direct supply via the inlet pipe the greatest advantage is that single tanks can easily be supplied with oxygen individually and a better total utilization of the added oxygen achieved.

There are various methods utilized for injecting oxygen gas into the water under high pressure. Two of the most commonly used are the oxygen cone and deep wells, while others employ different types of injector.

Oxygen cone: In the oxygen cone the oxygen gasand water enter at the top through different pipes (Fig. 8.10). The oxygen will be pushed down in the cone because of the water flow and a large oxygen bubble, actually a layer of oxygen gas, will be created lower down in the cone. The water will flow in small drops through this layer, creating a situation with water drops flowing through a pure oxygen atmosphere. Since the pressure inside the cone can be up to 5 bar, good gas transfer is achieved and because of this quite good efficiency. After flowing through the oxygen layer, the oxygenated water will flow out, from the bottom of the cone. However, if the cone is ‘overloaded’ with water, the oxygen layer will be pushed down to the lower end of the cone, perhaps also through the cone outlet and efficiency is reduced. Because of the high pressure used inside the cone to transfer oxygen gas into the water, the pressure of the water must be increased before it enters the cone. To do this, part of the water flow is piped from the main pipeline, and a high-pressure centrifugal pump used to increase the pressure in this part flow before it enters the cone. After leaving the cone, having been supersaturated with oxygen, the water is returned to the main flow. However, the water pressure must be reduced by passage through a pressure reduction valve before entering the main flow again. 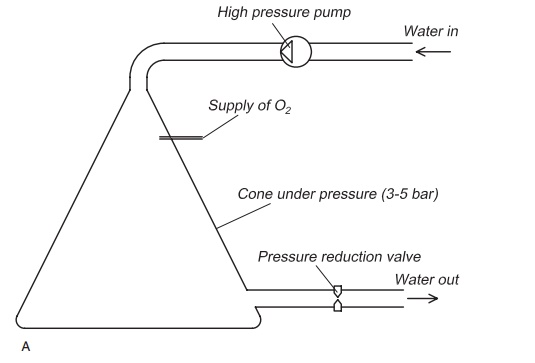 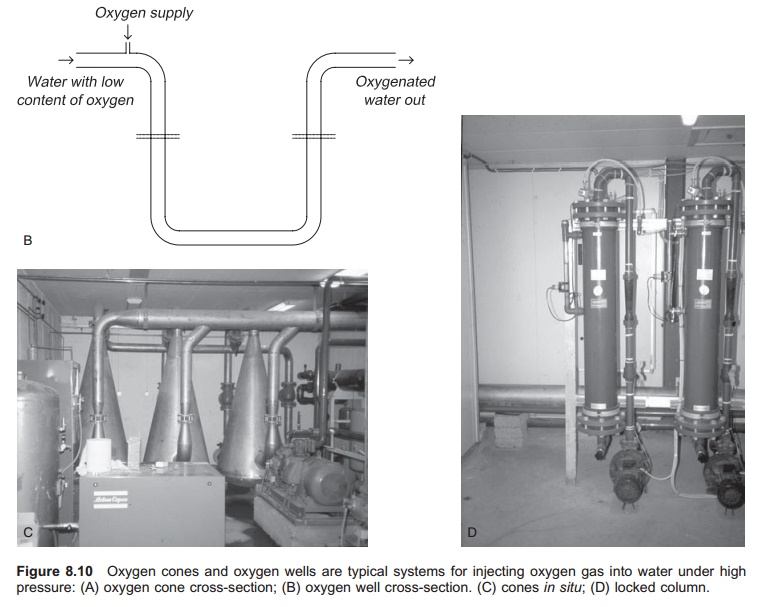 Use of oxygen wells: Oxygenation in wells is some-times used and gives quite good efficiencies (70–90%) (Fig. 8.10). Well design varies, but the main purpose is to mix oxygen and water at quite large depths where the high pressure together with effective mixing ensures good efficiency. One method that utilizes this principle is the U tube. Oxygen gas in injected into the water before it flows into the U tube. At the bottom of the U the pres-sure will be increased depending on the depth of the U; 10–30 m is usual. The construction ensures effective mixing by creating turbulence betweenthe oxygen gas and the water and the gas bubbles now dissolve. The same principle is used when oxygen is added directly into a deep-water intake. In land-based fish farms in Norway this system has been used with direct addition of oxygen to the inlet pipe at depths of 20–30 m. Here the pressure is high and good transfer of the oxygen gas into the water is achieved.

When using such methods it is important to be aware that the water flow rate through the pipe will be reduced because the oxygen gas takes up space and the real cross-sectional area where the water flows is reduced. If the water is sent to a pump after injection of oxygen, care must be taken because the conditions are now optimal for cavitation with gas bubbles that may implode as the water passes through the pump.

Oxygenation in sea cages: Recent research hasshown that lack of oxygen may occur in sea cages, possibly as the result of algal blooms in the area where the cages lie. The oxygen concentration may be reduced to below 70% saturation at the end of dark nights because both fish and algae use oxygen during the night. The conditions can be so bad that the effects of current induced water exchange cannot meet the reduced oxygen concen-tration caused by the algal bloom.

Lack of oxygen may also be caused by high temperatures and high fish densities in sea cages. The oxygen consumption of the fish increases with temperature and at the same time the oxygen content of the water is reduced; in such cases the lack of oxygen will be local to the cage. However, if the water current increases, more oxygen-rich water can be transported to the cage; a propeller may therefore be used to create an artifi-cial current to increase the supply of oxygen-rich water.

It is difficult to monitor the oxygen concentration in a sea cage in a representative way, because the cage can be large and there may be individual variations within the cage, mainly due to the depth. Several oxygen meters could therefore be advantageous.

When pure oxygen gas is to be added to the cage, oxygen diffusers can be lowered into the cage. It is very advantageous to create an equal pressure on the diffuser, so that an equal amount of oxygen gas is released all around the cage. As it is important to get an even distribution of the added oxygen, spe-cially designed diffusers are recommended.