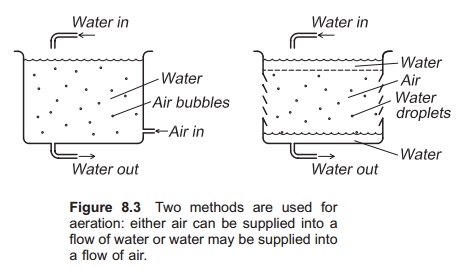 Design and construction of aerators

With aerator the aim is to create conditions as near equilibrium as possible between the gas in the air and the gas in the water. Eventually super-saturated gas, especially nitrogen, will be aerated out and oxygen will be supplied if the concentration is below saturation. The aim in constructing an aerator is to achieve optimal conditions for exchange of gas between air and water, so that equi-librium can be reached. By creating a large contact area between the water and the air a good gas–water exchange will occur; see equations for gas transfer and the A/V relationship. The layers of air or water ought to be as thin as possible. To create thin layers it is important that both the current of air and the current of water are turbulent so that effective gas transfer can occur at the water–air interface. The aeration process needs time, and effective aerators will need less time to achieve the same degree of saturation than ineffective ones. Mass transfer from the air will occur into a tank of non-saturated water, almost 100% saturation being achieved, but this will take a very long time.

Two main methods are utilized for aeration (Fig. 8.3). Either air can be supplied into a flow of water, or water may be supplied into a flow of air. An example of the first method is bubbling of air through a water column; droplets of water passing through a layer of air illustrate the second method. Since the droplets are small, a large surface area 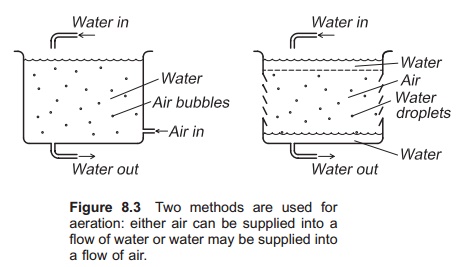 between the water and the air is created; the smaller the bubbles or droplets, the larger the surface area.

Aerators can be constructed either for supplying oxygen to the water (gassing) or removing nitrogen or carbon dioxide from the water (degassing). An aerator built for gassing is not necessarily good for degassing; aerators for both O2 and N2 are usual.

Many methods are used for aeration, and several designs of aerators are available either for adding oxygen, or removing nitrogen or carbon dioxide. Objective criteria are needed by which to evaluate aerators; these have been developed for both clean water conditions and field conditions. Most have been developed for wastewater applications, however, and may not be the most accurate or valid for use on aerators in aquaculture.

Performance testing methods depend on the aerator type. For some, such as gravity aerators, the difference in the gas concentration entering and leaving the aerator can be used. The gas exchange in a tank of a given size is used for testing the per-formance of surface aerators. Standardized set-ups and equations are available for testing the perfor-mance of aerators under laboratory conditions and with clean water. Normally, the aerator is tested for oxygen, but other tests can be carried out, especially for nitrogen or carbon dioxide. A typical way to perform a standardized aeration test for oxygen is to remove all oxygen from the water with, for example, cobalt chloride and sodium sulphite,15 after which the aerator is started and the increase in oxygen concentration measured in relation to time. By doing this the KLA value for the aerator may be found; this value also shows the perfor-mance of the aerator, a high KLA value represent-ing an effective aerator. Performance tests can also be carried out under field conditions, but the results are difficult to compare, because the water quality can vary from site to site, as can the starting saturation.

If Qw is given in l/min, and C in mg O2/l, the fol-lowing equation can be used to find the OTR value in kg oxygen transferred per hour:

As said, this can be measured directly for gravity aerators, and also under field conditions (OTRf).

For basin aerators a standardized test procedure may be used on clean water; the standardized oxygen transfer rate (SOTR) in kg/h is given by the following expression:

This test is performed with clean water, but compensating factors for water quality can be used to adapt it to field conditions. The following equation  can be used to describe this:

β= field  correction factor for  difference in oxygen  solubility  due  to constituends of salt, particles and surface active substances

Cs=oncentration of oxygen at full saturation and measured temperature

Cs20=concentration of oxygen at full saturation at 20°C

Cw=concentration of oxygen in the water that is aerated.

All aerators require a supply of energy; this can be added directly (electricity), or it may be energy that is stored in the water (potential energy) as in

gravity aerators. The potential energy can be uti- lized by sending the water from a high level to a lower level through an aerator. When choosing an

aerator it is important that it uses the energy sup- plied as efficiently as possible to transfer the gas.

Another indicator variable is the oxygen transfer efficiency (OTE) in units of kg O2  transferred per hour in relation to the added oxygen gas and the mass flow (m), either measured under standardized (OTE) or in field conditions (OTEf). This indicates how effectively the added gas is transferred to the water  and  can  be  calculated  from  the  following equations:

For some aerators, such as some gravity aerators, it is  impossible  to  measure  the  oxygen  flow  rate because they are open to the atmosphere; the OTE value can then be measured instead.

The effectiveness (E) of the aerator is another useful indicator that shows how effectively the gas is transferred into the water (in gassing) or super- saturated gas is removed from the water. The values will vary, depending on the gas. The effectiveness can also be used to compare aerators, but they must be tested in the same system and under indentical conditions:

The price of getting gas in or out of the water is the most important factor, and this also makes com- parisons of the methods possible. Included are both the aerator purchase price and the costs of running it in relation to the amount of oxygen transferred: