In the injection system the oxygen gas comes from the source and is injected or mixed into the water.

In the injection system the oxygen gas comes from the source and is injected or mixed into the water. To get as much gas as possible into the water, a special injection system is necessary. Oxygen gas can be mixed into water under normal or high pres-sure. With high-pressure oxygenation, the water is pressurized up to 4 bar (see conversion factor box below) before the oxygen is added, and more than 500% supersaturation can be achieved without problems. When using normal pressure or low-pressure oxygenation (up to 1 bar), 100–300% satu-ration can be achieved. Normal or low-pressure oxygenation is used on the main inlet pipe to the farm, while high-pressure oxygenation will normally be carried out in a part flow divided from the main flow because it is too costly to pressurize the main water inlet. Furthermore, it is easy to get a concen-tration of oxygen higher than either needed or rec-ommended. Too high an oxygen concentration may damage the gills of the fish. When the water enters the fish tanks, it is not recommended to be above 150–200% oxygen saturation, and even these concentrations have been called into question.

Conversion factors for pressure units are as follows:

Where to install the injection system

On a land-based fish farm oxygen gas can be added to the water in several places (Fig. 8.8): 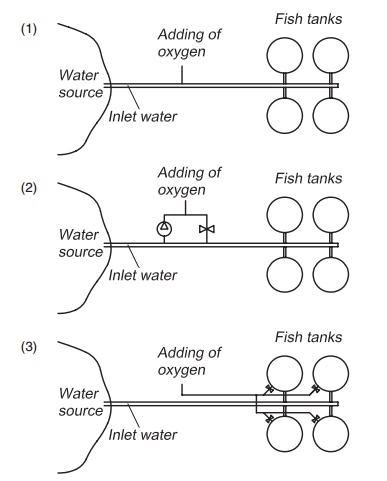 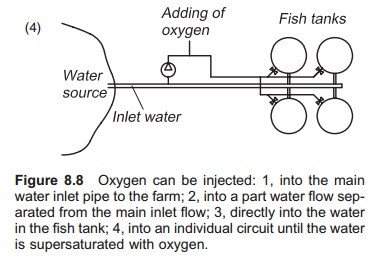 When adding oxygen to the main flow, the gas is added directly into the main pipeline to the farm. It is important to be aware that the oxygen gas added to the water needs space so the water flow through the pipe will be reduced, and this must be taken into consideration when specifying the inlet pipes. With this method it is difficult toincrease the pressure in the water significantly because the equipment required to increase the pressure in the entire water supply will be very large and costly.

Oxygenation of part of the water flow is carried out by diverting some of the water from the main pipeline into a smaller pipe. The pressure in this smaller pipe can and is normally increased, before oxygen gas is added by means of a pump. The pump is normally of the high-pressure centrifugal multi-stage type. As the pressure in the water is increased to 2–4 bar, a normal centrifugal pump is not power-ful enough. After adding the oxygen gas, the pres-sure is reduced by a reduction valve; the water, which is now supersaturated with oxygen, is piped into the main flow.

In the third method oxygen is supplied directly to the fish tank either by direct addition via the inlet pipe to the tank or through diffusers at the bottom of the tank. The advantage with this method is that individual oxygenation of the separate fish tanks is possible; hence it is also possible to improve oxygen utilization because only the amount necessary for the fish in the tank is added. By having an oxygen meter in the outlet of the tank an acceptable value can be set (for instance 7 mg/l) and a simple control system can be used to add the necessary oxygen. If the temperature increases or the fish grow faster, more oxygen will be added to avoid the oxygen level in the outlet dropping. Another advantage achieved by using diffusers directly at the bottom of the fish tank is that saturation in the tank will always be below 100%. It will therefore be easier to get the supplied oxygen into the water, because it is not being supplied against a large oxygen gra-dient as is the case when oxygenating super-saturated water (refer to KLA value).

When adding oxygen to a closed circuit, part of the inlet water to the farm is taken out and super-saturated with oxygen. This supersaturated water is then piped directly to each of the fish tanks on the farm through separate pipelines. The fish tank has two inlet pipes, one delivering aerated water at up to 100% oxygen saturation and another delivering water supersaturated with oxygen. Because it is possible to adjust the oxygen supply to the various tanks on the farm individually, good efficiency can be achieved. The major disadvantage of this method is the high cost of the additional piping needed.

Oxygenation may be carried out both in fresh-water and seawater. It is simpler to add oxygen to seawater because of its higher ion concentration. Oxygen microbubbles will be smaller in seawater than in freshwater because the surface tension is reduced.15 Small bubbles have a reduced rise veloc-ity and so the contact time will increase. In addi-tion, the relative surface area is higher for small bubbles than for large ones. Hence the efficiency of mixing, and thus the necessary addition pressure, varies with the salt concentration.

Many methods are available to inject oxygen into water, using both low and high pressure. To be able to evaluate the performance, evaluation methods are available for aerators. As pure oxygen is much more expensive than air, its utilization is very important. This is given by the oxygen transfer effi-ciency (OTE), which is also known as the absorption efficiency and is the amount of oxygen dissolved in water in relation to the amount of oxygen supplied:

Cout=concentration  of  oxygen  after  injection  of oxygen