An abnormal cervical cytologic finding from a Pap test should be followed by visual inspection of the vagina and a bimanual examination.

An abnormal cervical cytologic finding from a Pap test should be followed by visual inspection of the vagina and a bimanual examination. The first objective is to exclude the presence of invasive carcinoma. Once this has been accomplished, the objectives are to determine the grade and distribution of the intraepithelial lesion. Options for evaluation include repeat cytology, HPV DNA testing, colposcopy with directed biopsies, and endocervical assessment.

Colposcopy with directed biopsy has been the criterionof disease detection and remains the technique of choice for treatment decisions. A colposcope is a binocular stereomi-croscope with variable magnification (usually 7× to 15×) and a light source with a green filter to aid in the identification of abnormal appearing blood vessels that may be associated with intraepithelial neoplasia. With colposcopy, areas with changes consistent with dysplasia are identified, allowing directed biopsy (i.e., biopsy of the area where dysplasia is most likely). Colposcopic criteria such as white epithelium, abnormal vascular patterns, and punctate lesions help iden-tify such areas (Fig. 43.2). To facilitate the examination, the cervix is washed with a 3% to 4% acetic acid solution, which acts as an epithelial desiccant of intracellular protein, enhancing visualization of dysplastic lesions. Lesions usu-ally appear with relatively discrete borders near the SCJ within 10–90 seconds of acetic acid application. Tissue sam-ples for biopsy can be collected; the number of samples obtained will vary depending on the number and severity of abnormal areas found. 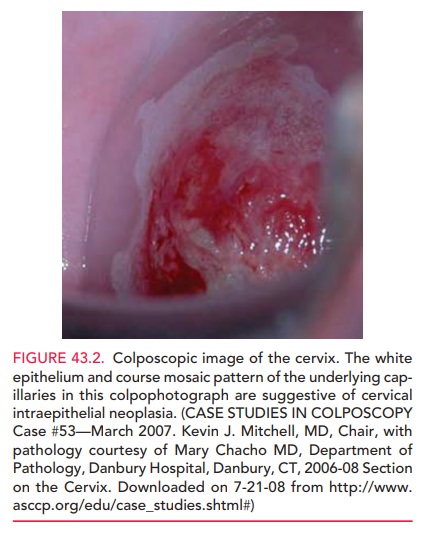 Visualization of the entire SCJ is required for a col-poscopy to be considered satisfactory. If the SCJ is not visualized in its entirety, or if the margins of abnormal areas are not seen in their entirety, the colposcopic assess-ment is termed unsatisfactory, and other evaluations such as cervical conization or endocervical curettage (ECC) is indicated. In this procedure, a small curette is used to collect cells from the endocervical canal. An endocervical brush can be used to retrieve additional cells dislodged in the curette specimen. This endocervical sample is obtained so that potential disease farther inside the cervical canal, which is not visualized by the colposcope, may be detected. The cervical biopsies and ECC are then submitted sepa-rately for pathologic assessment.

Testing for the presence of high-risk HPV DNA is now being used as an adjunct screening tool for cervical neoplasia in women older than 30 years of age. It is also used as a triage tool for women with Pap test results reported as ASC-US and in the management of non-adolescent women with LSIL.

HPV DNA can identify women whose Pap test results are caused by other, non-HPV-associated phenom-ena, such as infection, thus preventing unnecessary colpo-scopic evaluations. Because HPV is more prevalent in younger women and the rate of CIN 2 and CIN 3 increases with age, HPV DNA testing is more useful as a triage tool in older women. HPV DNA testing is also used in the ini-tial workup of women with AGC.