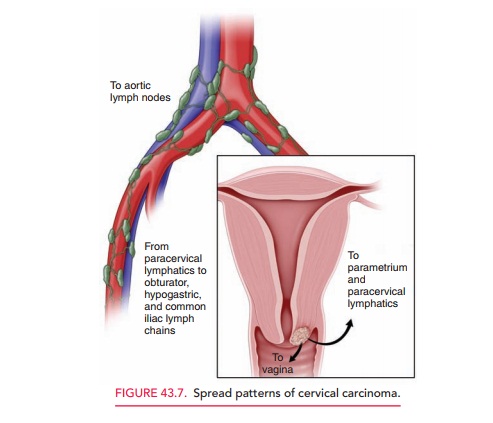 Between 1950 and 1992, the death rate from cervical can-cer declined by 74%. The main reason for this steep decrease is the increasing use of the Pap test for cervical cancer screening.

Between 1950 and 1992, the death rate from cervical can-cer declined by 74%. The main reason for this steep decrease is the increasing use of the Pap test for cervical cancer screening. The death rate continues to decline by approximately 4% per year. Despite the progress made in early detection and treatment, approximately 11,000 new cases of invasive cervical carcinoma are diagnosed annually with 3870 deaths.

The average age at diagnosis for invasive cervical can-cer is approximately 50 years, although the disease may occur in the very young as well as the very old patient. In studies following patients with advanced CIN, this precur-sor lesion precedes invasive carcinoma by approximately 10 years. In some patients, however, this time of progres-sion may be considerably less.

The signs and symptoms of early cervical carcinoma are variable and nonspecific, including watery vaginal dis-charge, intermittent spotting, and postcoital bleeding. Often the symptoms go unrecognized by the patient. Because of the accessibility of the cervix, accurate diagno-sis often can be made with cytologic screening, colpo-scopically directed biopsy, or biopsy of a gross or palpable lesion. In cases of suspected microinvasion and early-stage cervical carcinoma, conization of the cervix is indi-cated to evaluate the possibility of invasion or to define the depth and extent of microinvasion. CKC provides the most accurate evaluation of the margins. 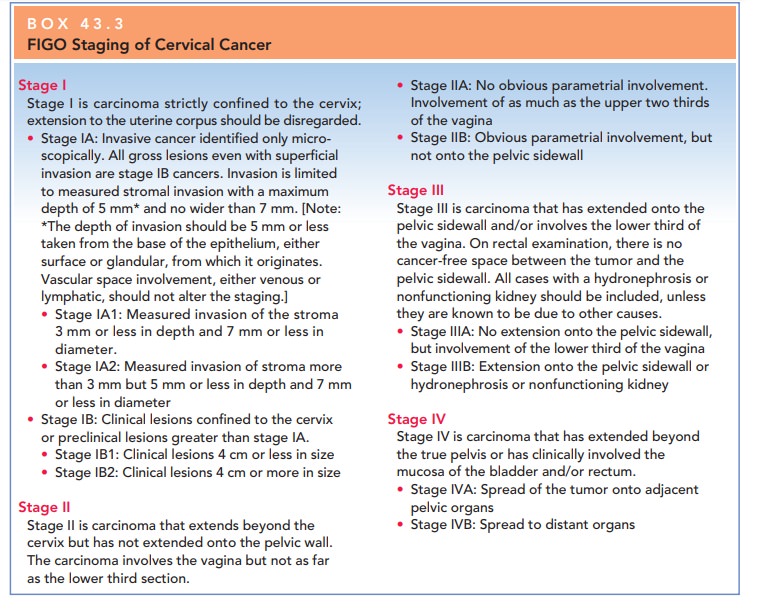 Staging is based on the International Federation of Gynecology and Obstetrics (FIGO) Staging Classification (Box 43.3). This classification is based both on the histo-logic assessment of the tumor sample and on physical and laboratory examination to ascertain the extent of disease. It is useful because of the predictable manner in which cervical carcinoma spreads by direct invasion and by lym-phatic metastasis (Fig. 43.7). Careful clinical examination should be performed on all patients. Examinations should be conducted by experienced examiners, and may be per-formed under anesthesia. Pretreatment evaluation of women with cervical carcinoma often can be helpful if provided by an obstetrician–gynecologist with advanced surgical training, experience, and demonstrated compe-tence, such as a gynecologic oncologist. Various optional examinations, such as ultrasonography, computed tomog-raphy (CT), magnetic resonance imaging (MRI), lym-phangiography, laparoscopy, and fine-needle aspiration, are valuable for treatment planning and to help define the extent of tumor growth, especially in patients with locally advanced disease (i.e., stage IIb or more advanced). Sur-gical findings provide extremely accurate information about the extent of disease and will guide treatment plans, but will not change the results of clinical staging. 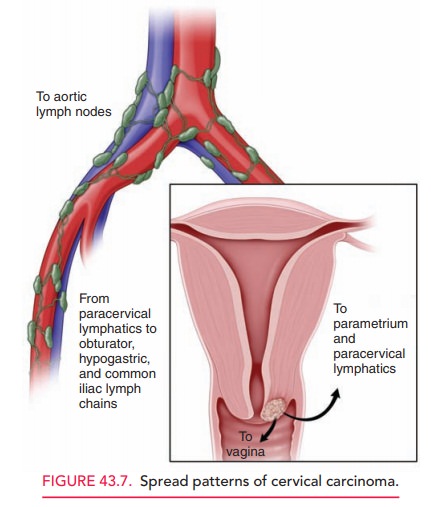 The clinician should be familiar with the options for treat-ing women with both early and advanced cervical cancer and should facilitate referrals for this treatment. Surgery or radiation therapy may be options for treatment, depending on the stage and size of the lesion:

·            Patients with squamous cell cancers and those with ade-nocarcinomas should be managed similarly, except for those with microinvasive disease. Criteria for micro-invasive adenocarcinomas have not been established.

·            For stage Ia1, microinvasive squamous carcinoma of the cervix, treatment with conization of the cervix or sim-ple extrafascial hysterectomy may be considered.

·            Stage Ia2, invasive squamous carcinoma of the cervix, should be treated with radical hysterectomy with lymph node dissection or radiation therapy, depending on clin-ical circumstances.

·            Stage Ib1 should be distinguished from stage Ib2 carci-noma of the cervix, because the distinction predictsnodal involvement and overall survival and may there-fore affect treatment and outcome.

·  For stage Ib and selected IIa carcinomas of the cervix, either radical hysterectomy and lymph node dissection or radiation therapy with cisplatin-based chemotherapy should be considered. Adjuvant radiation therapy may be required in those treated surgically, based on pathologic risk factors, especially in those with stage Ib2 carcinoma.

·  Stage IIb and greater should be treated with external-beam and brachytherapy radiation and concurrent cisplatin-based chemotherapy.

Brachytherapy delivers radiation close to the affected organ or structure. Both high- and low-dose brachytherapy are used to treat cervical cancer. The brachytherapy radiation is delivered using special apparatuses known as tandem and ovoid devices placed through the cervix into the uterus and at the apices of the vagina. The external beam radiation is applied primarily along the paths of lymphatic extension of cervical carcinoma in the pelvis.

The structures close to the cervix, such as the bladder and distal colon, tolerate radiation relatively well. Radiation therapy doses are calculated by individual-patient needs to maximize radiation to the tumor sites and potential spread areas, while minimizing the amount of radiation to adjacent uninvolved tissues. Complications of radiation therapy include radiation cystitis and proctitis, which are usually relatively easy to manage. Other more unusual complica-tions include intestinal or vaginal fistulae, small bowel obstruction, or difficult-to-manage hemorrhagic proctitis or cystitis. Tissue damage and fibrosis incurred by radiation therapy progresses over many years, and these effects may complicate long-term management.

Following treatment for cervical carcinoma, patients should be monitored regularly, for example, with thrice-yearly follow-up examinations for the first 2 years and twice-yearly visits subsequently to year 5, with Pap tests annually and chest x-rays annually for up to 5 years. The five-year survival rates for cervical cancer are listed in Table 43.2. 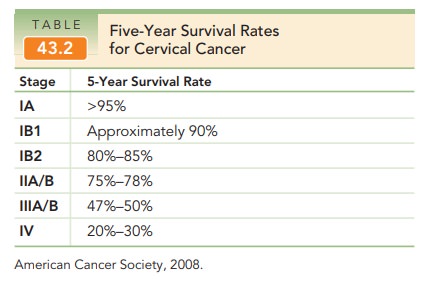 Treatment for recurrent disease is associated with poor cure rates. Most chemotherapeutic protocols have only limited usefulness and are reserved for palliative efforts. Likewise, specific “spot” radiation to areas of recurrence also provides only limited benefit.

Occasional patients with central recurrence (i.e., recurrence of disease in the upper vagina or the residual cervix and uterus in radiation patients) may benefit from ultraradical surgery with partial or total pelvic exenteration. These candidates are few, but when properly selected, may benefit from this aggressive therapy.