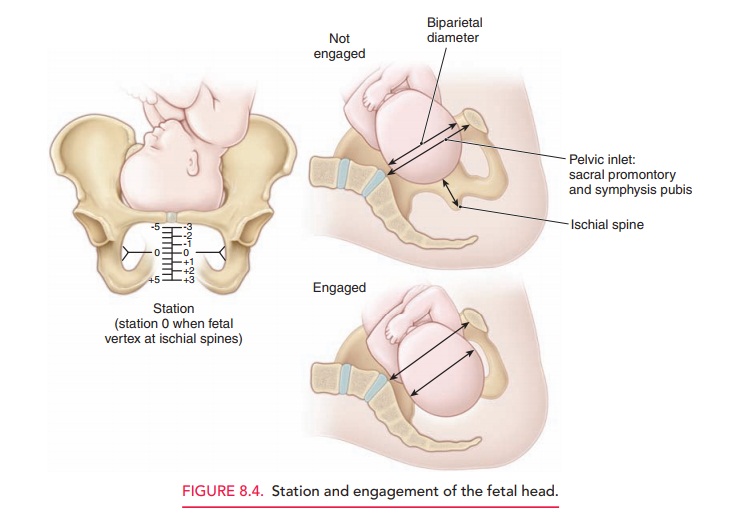 Patients should be instructed to contact their health care provider for any of the following reasons: (1) if their con-tractions occur approximately every 5 minutes for at least 1 hour.

Patients should be instructed to contact their health care provider for any of the following reasons: (1) if their con-tractions occur approximately every 5 minutes for at least 1 hour, (2) if there is a sudden gush of fluid or a constant leakage of vaginal fluid (suggesting rupture of membranes),

At the time of initial evaluation, the prenatal records are reviewed to (1) identify complications of pregnancy up to that point, (2) confirm gestational age to differentiate preterm labor from labor in a term pregnancy, and review pertinent laboratory information. A focused history helps in determining the nature and frequency of the patient’s contractions, the possibility of spontaneous rupture of membranes or significant bleeding, or changes in maternal or fetal status.

A focused review of systems should look for common complications of pregnancy resulting in altered labor management. A limited general physical examination is performed (with special attention to vital signs), along with the abdominal and pelvic examinations. If contractions occur during this physical examination, they may be palpated for intensity and duration by the examining physician. Auscultation of fetal heart tones is also of critical importance, particularly immediately fol-lowing a contraction, to determine the possibility of any fetal heart rate deceleration. A limited transabdominal ultrasound may also be useful if there is a question of fetal lie, placental location, or decreased amniotic fluid volume or other abnormalities.

The initial examination of the patient’s abdomen may be accomplished using Leopold maneuvers, a series of four palpations of the fetus through the abdominal wall that helps accurately determine fetal lie, presentation, and position (see Figure 9.7).

Lie is the relation of the long axis of the fetus with thematernal long axis. It is longitudinal in 99% of cases, occa-sionally transverse, and rarely oblique (when the axes cross at a 45-degree angle, usually converting to transverse or longitudinal lie during labor). Presentation is determined by the “presenting part,” that is, that portion of the fetus lowest in the birth canal, palpated during the examination. For example, in a longitudinal lie, the presenting part is either breech or cephalic. The most common cephalic presentation is the one in which the head is sharply flexed onto the fetal chest such that the occiput or vertex presents. Position is the relation of the fetal presenting part to the right or left side of the maternal pelvis (Fig. 8.2). 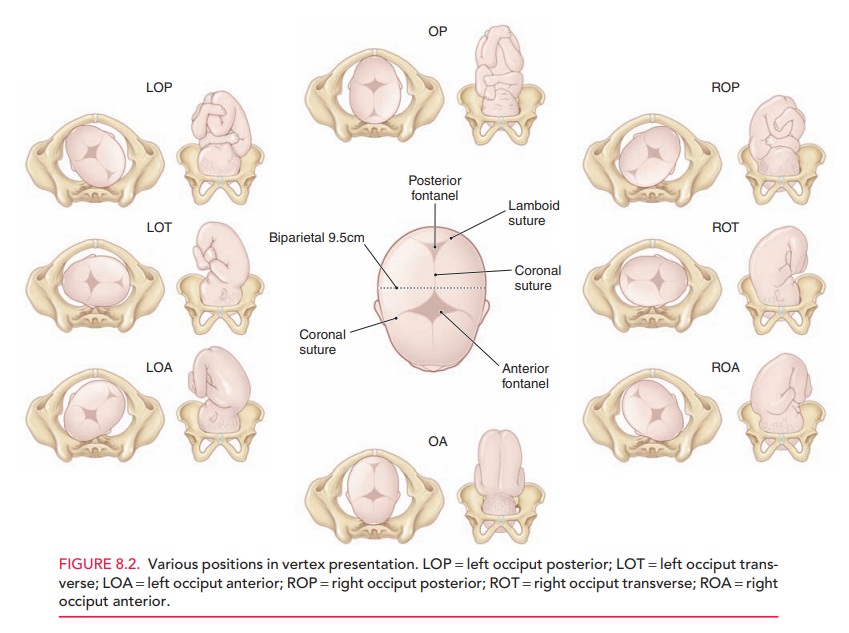 1.  Determining what occupies the fundus. In a longitudi-nal lie, the fetal head is differentiated from the fetal breech, the latter being larger and less clearly defined.

2.  Determining location of small parts. Using one hand to steady the fetus, the fingers on the other hand are used to palpate either the firm, long fetal spine or the various shapes and movements indicating fetal hands and feet. 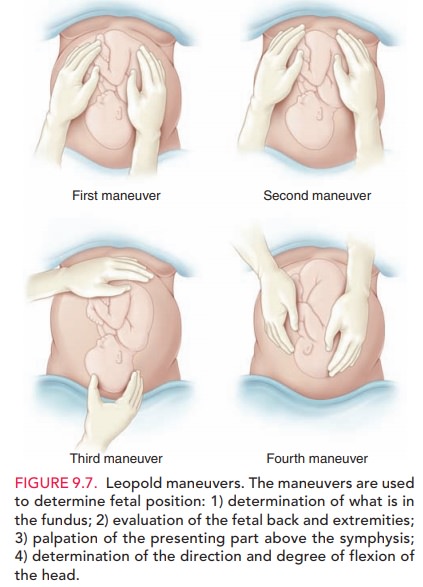 Palpation of the uterus during a contraction may also be helpful in determining the intensity of that particular con-traction. The uterine wall is not easily indented with firm palpation during a true contraction, but may be indented during a Braxton Hicks “contraction.”

A digital vaginal examination allows the examiner to determine the consistency and degree of effacement and degree of dilation of the cervix. This examination should be avoided in women with premature rupture of membranes or vaginal bleeding. Effacementis the shortening of the cervicalcanal from a length of about 2 cm to a mere circular orifice with almost paper-thin edges. Effacement is expressed as a percent of thinning from a perceived uneffaced state (Fig. 8.3). 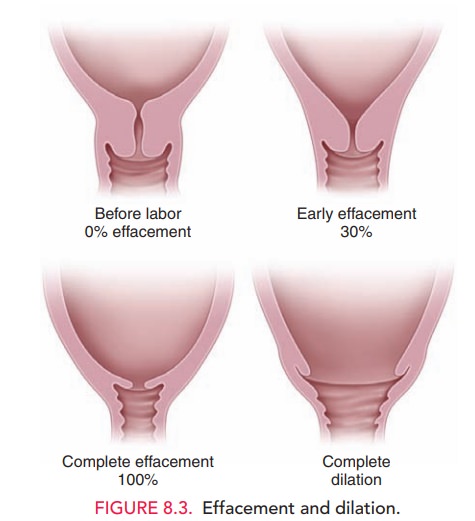 A cervix that is not effaced, but is softened, is more likely to change with contractions than one that is firm, as it is earlier in preg-nancy. If the cervix is not significantly effaced, it may also be evaluated for its relative position, that is, anterior, midposi-tion, or posterior in the vagina. A cervix that is palpable ante-rior in the vagina is more likely to undergo change in labor sooner than one found in the posterior portion of the vagina. This suggests that the presenting part has descended into the pelvis, creating more pressure on the cervix, thereby rotating it anteriorly. With more effective force on the lower uterine segment, contractions would cause a greater change in dilation and effacement of the cervix. 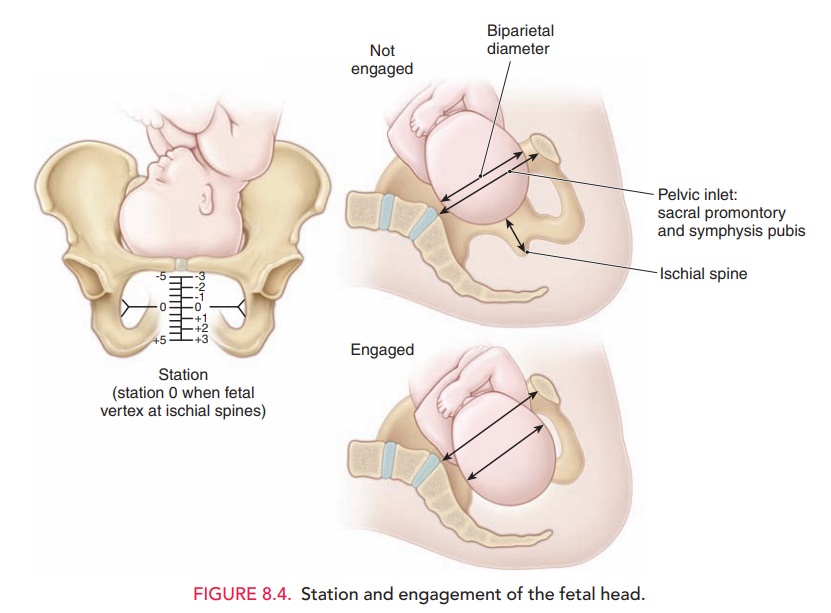 The fetal head is said to be engaged at zero station, a crucial functional “landmark” in the labor path.

However, caput succedaneum, cephalohematoma, and molding of the fetal head may mislead the examiner to a greater station than has been obtained.