Diarrhea is the universal finding with E.coli strains that are able to cause intestinal disease.

Diarrhea is the universal finding with E.coli strains that are able to cause intestinal disease. The nature of the diarrhea varies depending on the pathogenic mecha- nism. Enterotoxigenic and enteropathogenic strains produce a watery diarrhea, the enterohemorrhagic  strains  produce  a  bloody  diarrhea,  and  the  enteroinvasive strains may cause dysentery with blood and pus in the stool. The diarrhea is usu- ally self-limiting after only 1 to 3 days. The enterohemorrhagic E.coli are an ex- ception, with life-threatening manifestations outside the gastrointestinal tract due to Shiga toxin production.

Diarrhea-causing E.coli are conveniently classified according to their virulence properties as enterotoxigenic (ETEC),enteropathogenic (EPEC),enteroinvasive(EIEC), enterohemorrhagic (EHEC), or enteroaggregative (EAEC). Each groupcauses disease by a different mechanism, and the resulting syndromes usually differ clinically and epidemiologically. For example, human ETEC and EIEC strains infect only humans. Food and water contaminated with human waste and person-to-person contact are the principal means of infection. A summary of the pathogenesis of infec-tion, clinical syndromes, and epidemiology of infection for each enteropathogen is shown in Table 21 – 1. 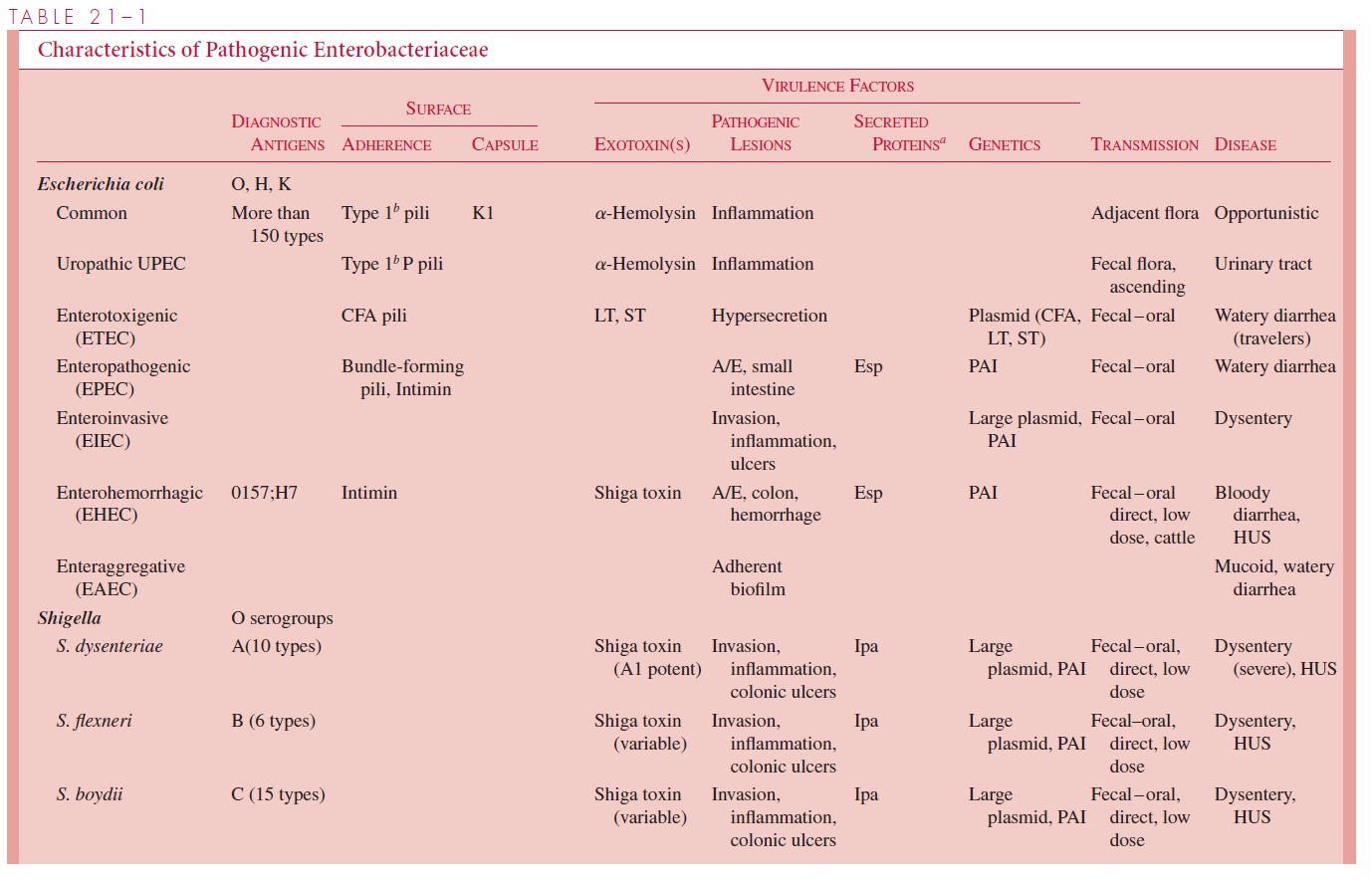 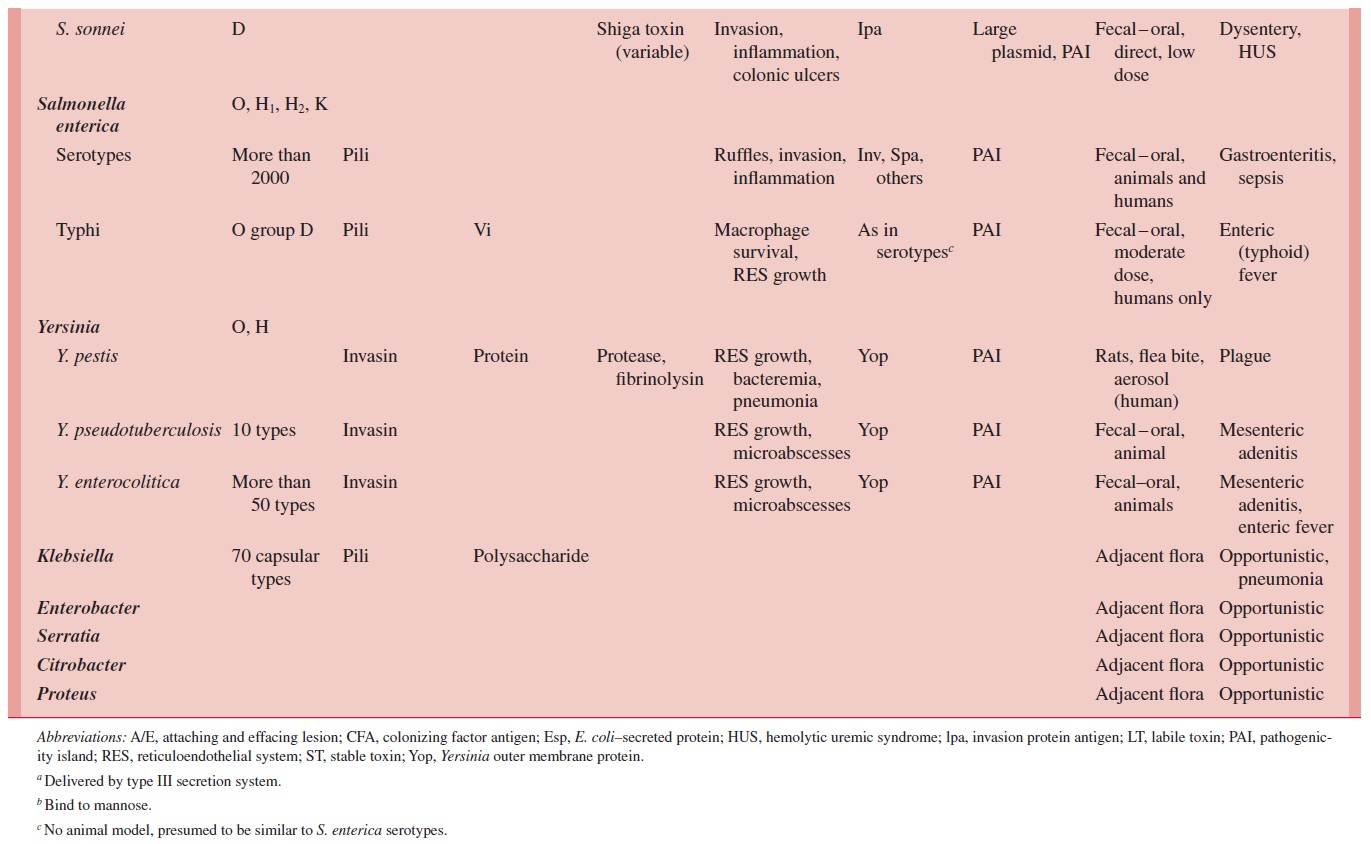 ETEC are the most important cause of traveler’s diarrhea in visitors to developing coun-tries. ETEC also produce diarrhea in infants native to these countries, where they are a leading cause of morbidity and mortality during the first 2 years of life. Repeated bouts of diarrhea caused by ETEC and other infectious agents are an important cause of growth retardation, malnutrition, and developmental delay in the third world countries where ETEC are endemic. ETEC disease is rare in industrialized nations.

Transmission is by consumption of food and water contaminated by human cases or convalescent carriers. Uncooked foods such as salads or marinated meats and vegetables are associated with the greatest risk. Direct person-to-person transmission is unusual, be-cause the infecting dose is high. Animals are not involved in ETEC disease.

ETEC diarrhea is caused by strains of E.coli that produce LT and/or ST enterotoxins in the small intestine. Strains that elaborate both LT and ST cause more severe illness. Adher-ence to surface microvilli mediated by the CFA class of pili is essential for the efficient delivery of toxin to the target enterocytes. The genes encoding the ST, LT, and the CFA pili are borne in plasmids. A single plasmid can carry all three sets of genes. The bacteria remain on the surface, where the adenylate cyclase – stimulating action of the toxin(s) creates the flow of water and electrolytes from the enterocyte into the intestinal lumen. The mucosa becomes hyperemic but is not injured in the process. There is no invasion or inflammation.

Although there can be more than one episode of diarrhea, infections with ETEC can stim-ulate immunity. Travelers from industrialized nations have a much higher attack rate than adults living in the endemic area. This natural immunity is presumably mediated by sIgA specific for LT and CFAs. The small ST peptides are nonimmunogenic. The disease is of very low incidence in breast-fed infants, underscoring the protective effect of maternal antibody and the importance of transmission by contaminated food and water.

EPEC strains were first identified as the cause of explosive outbreaks of diarrhea in hospital nurseries in the United States and Great Britain during the 1950s. The disease seems to have disappeared in industrialized nations, although it may be underestimated due to the difficulty of diagnosis. In developing countries throughout the world, EPEC account for up to 20% of diarrhea in bottle-fed infants younger than 1 year of age. The reservoir is in-fant cases and adult carriers with transmission by the fecal – oral route. Nursery outbreaks demonstrate the importance of spread by fomites, which suggests that the infecting dose for infants is low. Documented adult cases have usually been in circumstances where the number of organisms ingested was very large.

EPEC initially attach to enterocytes using pili of the BFP type to form clustered micro-colonies on the enterocyte cell surface. The lesion then progresses with effacement of the microvilli and changes in the cell morphology including the production of dramatic “pedestals” with the EPEC bacterium at their apex. The combination of these actions is called the attachment and effacing (A/E) lesion (Fig 21 – 4). The many steps involved in the formation of the A/E lesion are genetically controlled in a PAI, which includes the genes for the major attachment protein, intimin, and a contact secretion system. The secretion system injects at least five E. colisecretion proteins (Esps) into the host cell cytoplasm including, remarkably, the receptor for intimin. The other E. coli secretion proteins perturb intracellular signal transduction pathways, one effect of which is the induction of modifications in enterocyte cytoskeleton proteins (actin, talin). The cytoskeleton accumulates beneath the attached bacteria to form the pedestals and com-plete the A/E lesion. Exactly how this leads to diarrhea is not known, but the change from the normal microvillus border to the A/E must disrupt intestinal absorptive functions. 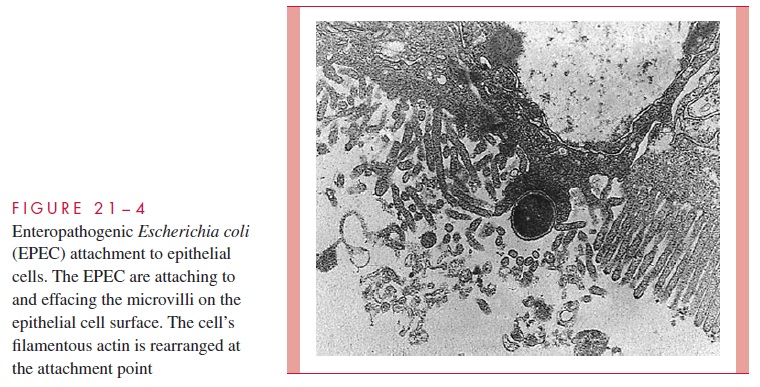 In endemic areas, EPEC can be isolated often from the stool of asymptomatic adults, but unlike ETEC, these strains do not seem to cause traveler’s diarrhea in individuals new to the area. This casts doubt on whether adults have acquired immunity or resistance based on physiologic factors.

EHEC disease and the accompanying hemolytic uremic syndrome (HUS) are the result of consumption of products from animals colonized with EHEC strains. It is also clear from secondary cases in families during outbreaks that person-to-person transmission also occurs. This disease occurs more in developed rather than in developing countries.

EHEC was first recognized in the early 1980s when outbreaks of HUS (hemolytic anemia, renal failure, and thrombocytopenia) were linked to a single E. coli serotype, O157:H7. Since then EHEC disease has emerged as an important cause of bloody diar-rhea in industrialized nations and retained a remarkable but not exclusive relationshipwith the O157:H7 serotype, particularly in North America. Regional and national out-breaks associated with unpasteurized juices and hamburger have caught the attention of the public, the press, and the government.

The emergence of EHEC is related to its virulence , low infecting dose, common reservoir (cattle), and changes in the modern food processing industry that pro-vide us with fresher meat (and bacteria). The low infecting dose, estimated at 100 to 200 organisms, is particularly important. This is a level where food need not come directly from the infected animal, only be contaminated by it. For example, large modern meat processing plants can mix EHEC from colonized cattle at one ranch into beef from hun-dreds of other farms and quickly ship it all over the country. Therefore, the worst out-breaks have been seen in countries with the most advanced food production systems. If the organisms are ground into hamburger, an infecting dose of EHEC may remain even after cooking if the meat is left rare in the middle. Unpasteurized milk carries an obvious risk but fruits and vegetables have also been the source for EHEC infection. In these in-stances the EHEC from the manure of cattle grazing nearby has contaminated these prod-ucts in the field. The bacterial dose from a few “drop” apples (those picked up from the ground) included in a batch of cider has been enough to cause disease.

The distinguishing feature of the EHEC is the production of both Shiga toxins and the A/E lesions described above for EPEC. Another difference between EHEC and EPEC is that EHEC primarily attacks the colon while EPEC infects the small intestine. The multi-ple extraintestinal features such as HUS appear to be the result of circulating Shiga toxin. The interaction of EHEC with enterocytes is much the same as EPEC, except the EHEC strains do not form localized microcolonies on the mucosa. The outer membrane protein intimin mediates adherence and the contact secretion system injects the E. coli secretion proteins, which cause alterations in the host cytoskeleton. The genes for these properties are also found in a PAI.

The A/E features alone are sufficient to cause nonbloody diarrhea. Shiga toxin pro-duction causes capillary thrombosis and inflammation of the colonic mucosa, leading to a hemorrhagic colitis. Although it has not been detected in the blood of human cases, Shiga toxin is presumed to be absorbed across the denuded intestinal mucosa. Circulating Shiga toxin binds to renal tissue where its glycoprotein receptor is particularly abundant, caus-ing glomerular swelling and the deposition of fibrin and platelets in the microvasculature. How Shiga toxin causes hemolysis is less clear; perhaps the erythrocytes are simply dam-aged as they attempt to traverse the occluded capillaries. The strong association between EHEC disease and the O157:H7 serotype suggests that EHEC are more than just Shiga toxin – producing EPEC. The O157:H7 strains invariably have a large plasmid which may contain other virulence genes. Cases and outbreaks caused by Shiga toxin – producing E. coli of other serotypes may be on the rise and are common in some countries. Howthey differ from O157:H7 EPEC remains to be seen.

Virtually all aspects of EIEC disease are identical to Shigella , which under-scores the close relationship of the Shigella and Escherichia genera. Epidemiologically,EIEC infections are essentially restricted to children under 5 years of age living in devel- oping nations. The occasional documented outbreaks in industrialized nations are usuallylinked to contaminated food or water. This lower incidence of person-to-person transmis-sion correlates with the observation that the infecting dose for EIEC is higher than it is for Shigella. Humans are the only known reservoir.

EAEC is associated with a protracted (>14 days) mucoid, watery diarrhea in infants and children in developing countries. The EAEC strains are defined on the basis of the pattern the bacteria make (eg, localized, diffuse, stacked) when adhering to cultured mammalian cells. Even though EAEC adheres tightly to the intestinal mucosa, the A/E lesions of the EPEC and EHEC are not present. The pathogenesis of diarrhea is not clearly understood but may involve the ability to form a mucus – bacteria biofilm on the intestinal surface. In-flammatory cells are not seen.