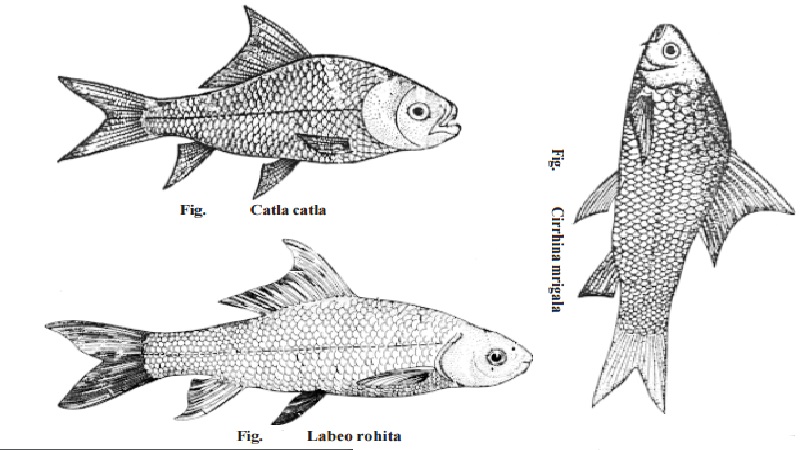 a) Catla catla (catla) : Catla has a deep body with prominent head, large upturned mouth, non-fringed lips, devoid of barbels and a broad dorsal fin with 14-16 branched rays are the identifying features. It feeds on zooplankton of the pond surface using large gill rakers; however, young ones (15-20 mm) feed on zooplankton and phytoplankton. It grows to a maximum size of 1.8 m (45 kg). It is a fast growing species among the Indian major carps. First year growth is 35-45 cm and about 1.5 - 2.0 kg. It matures in the second year.

b) Labeo rohita (Rohu) : Of all the carps, this is considered as the tastiest fish. It has a small and pointed head, terminal small mouth with fringed lower lip. A dorsal fin with 12-13 branched rays and full reddish scales are its identifying features. It is a column feeder on phytoplankton, plant debris or decaying debris of aquatic plants; however, the young feed on zooplankton. The maximum size attained is 1m. It is fairly fast growing species and first year growth is 35 - 40 cm and 900 g.

It is a bottom feeder on decaying organic and vegetable debris; however, its young feed on zooplankton. The maximum size attained is 0.9 m. Its growth in the first year is about 30 cm (700 g).

The catfish are air-breathing, or live-fishes as they are capable of directly breathing atmospheric air. They can live for a long time without water and can therefore be transported live and in fresh condition over long distances. The body is without scales and each of the upper and lower jaws possesses two pairs of long barbels in each. The mouth is non-protractile having jaws with teeth. Majority of the catfish are predatory and cannibalistic, feeding on all pond animals including fish fry.

These fish are also air-breathing and have a good demand. Elongated and cylindrical body, depressed head, large and protractile mouth are its identifying features. Murrels are suitable for culture in irrigation wells and shallow swamps.

b) C.striatus (Striped snake-head or Common murrel) : Stripes are present on its body. Attains a maximum size of 90cm.

a) Oreochromis mossambicus (Tilapia -'Jilabi' kendai) : An exotic fish introduced in India from East Coast of Africa in 1952. It is characterized by an anterior spinous dorsal fin and posterior soft dorsal fin. Maturity occurs even in two months old individuals. It breeds nearly eight times in a year. Female keeps the fertilized eggs guarded in its mouth.

Brackish water fishes spend most of its life in river mouths (estuaries) back waters, mangrove swamps and coastal lagoons. These are

Marine edible fishes of Tamilnadu coast include both cartilaginous and bony fishes.

Cartilagenous fishes are the sharks and skates.