Generally we use an ER model to know the concept of database design and this model consists of a collection of entities(real world objects)where each of these entities will be interconnected with each other with conditions and dependencies(i.e. one entity is dependent on another).

The basic concepts of ER model consists of

These are the general concepts which help to create an ER diagram and produce an ER model. With the help of these any database design can be created and viewed to know the concept in that database design.

An Entity can be anything a real-world object or animation which is easily identifiable by anyone even by a common man.

Eg: In a company’s database Employee, HR, Manager are considered as entities, where each of these entity will be having their own attributes. An entity is represented by a rectangular box. See Figure 3.5.

A weak entity is dependent on other entities and it doesn’t have any primary key like the Strong entity. It is represented by double rectangle. 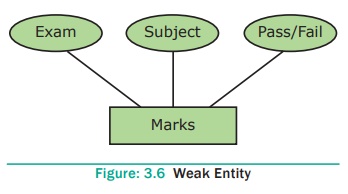 Here the marks is the weak entity and there are no unique id or primary key for that entity. So they are dependent on the existence of the other entity. See Table 3.3 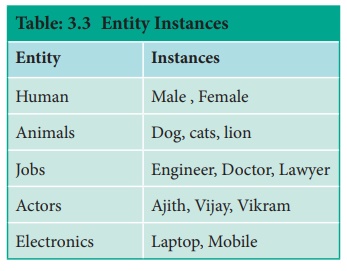 An attribute is the information about that entity and it will describe, quantify, qualify, classify, and specify an entity. An attribute will always have a single value, that value can be a number or character or string.

Generally a key attribute describes a unique characteristic of an entity. 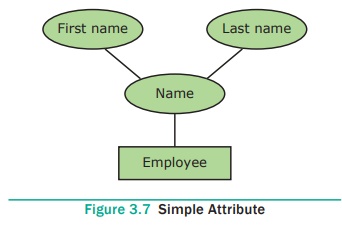 In the above table are the some examples for single valued attributes. See Figure 3.8 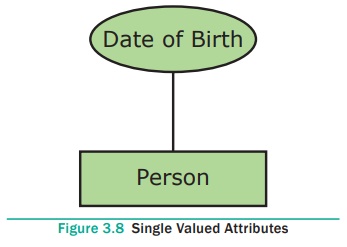 In Table 3.5 are some examples for Multi valued attributes.

In ER Model, relationship exists between two entities. Three types of relationships are available and the Entity-Relationship(ER) diagram is based on the three types listed below.

It is a finite set of liples in the RDBMS systems relation instances never have duplicate . E.g if Works-for is the relationship between the Employee entity

2. Degree of a relationship

The number of entity types involved is known as Degree of relationship. One – Unary, Two – Binary, Three – Ternary.E.g An employee of an organization acts as manager of few other employees. It also connects one entity to itself as a loop. so manager-of is unary. Similarly employee works- fordepartment, connects two entities and is binary. If a customer purchase an item, it involves shop keeper also and is a ternary relationship.

In the above example, Customer places the Order is a one-to-many relationship

Here the customer can place multiple orders and the order is related to only one customer. See Figure 3.11

The example of many-to-many relationship is Students registering the Courses. A student can register more than one courses and A course can be registered by many students. Hence it is many-to-many.