Do you want to know the sources of Law?

Customs play an important role in the framing of the laws.

Do you want to know the sources of Law? 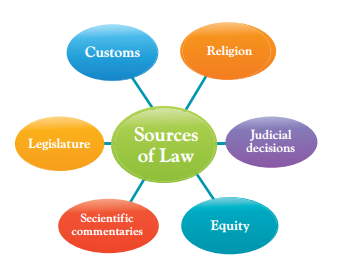 Customs play an important role in the framing of the laws. Most of the laws that came from customs are recognized by state later. Since ancient period we can notice that the dispute among tribals were resolved by the head of the Tribes using their customs and traditions. Customs became laws when tribes extended into the formation of state. State cannot actually ignore the customs of the country. The common law of England for example sprang mainly from customs.

For example Bull-Taming sport culture of Tamils of India resulted into the creation of Jallikattu Law in 2017. (Read the box for more information about Jallikattu Law of 2017)

The religion practiced by Primitive communities played a decisive role in evolving the laws of the state later. Religion was a basis of law for most of the nation. The origin of Hindu law can be traced in the code of Manu. The origin of Mohammedian law can be traced in Shariat law. Divine law is a law revealed through man from God. God is the ultimate source of divine law. For Christians Ten Commandments were the first law given by the Lord Almighty to his people and was considered as the basis of law.

“Indeed the early law of Rome was little more than a body of technical religious rules, a system of means for obtaining religious rights through the proper carrying out of certain religious formulas”. -Woodrow Wilson

Gettell maintains that the ‘state arose not as the creator of law but as the interpreter and enforcer of custom’. The function of the Judiciary is to interpret and declare the law. While discharging its function the judiciary creates new laws. The laws later gets recognized by the state. Judicial decisions thus became an another source of law. Some time the verdict of High Court and Supreme Court are treated as laws.

When laws are ambiguous and do not fit in, the principles of equity are applied and cases are decided according to commonsense and fairness.

“Equity is a body of rules existing by the side of the original civil law, founded on distinct principles and claiming incidentally to supersede the civil law in virtue of a superior sanctity inherent in those principles.” - Sir Henry Maine

v   The name given “Equity” is the set of legal principles in countries following the English common law tradition, which supplement strict rules of law where their application would operate harshly, so as to achieve what is sometimes referred to as “natural justice”

v   Equity has been described as “a gloss (meaning a supplement) on the common law, filling in the graps and making the English legal system more complete

v   In English Law, equity means that body of rules originally enforced only by the court of chancery.

Another source of law are scientific commentaries. when the commentary appears it is understood only as an argument, later on its authority is recognized as more authoritative than the Judicial decision.

“The opinion of learned writers on law have often been accepted as correct law: in England , for instance the opinions of Coke and Blackstone in America of story and kent , in India of Vijnaneswara and Apararka”  - A. Appadurai

Most of the laws in the modern times are framed by legislature and it is one of the most important source of law. Indian constitution is a classical example where the best provisions of other constitutions are borrowed and made it available for the best of our nation

“The state is founded on the minds of its citizens, who are moral agents.. a bad people means a bad state and a bad laws.”  - Gilchrist

Sources Of The Indian Constitution

US Constitution*: Fundamental Rights, Independent judiciary, Judicial Review, Impeachment of the President, Procedure for the removal of the judges of the Supreme Court, High Courts and Role of Vice President.