In political theory, citizenship refers not only to a legal status as a member of a country but also a normative ideal which means the ruled are full and equal participants in the political process.

In political theory, citizenship refers not only to a legal status as a member of a country but also a normative ideal which means the ruled are full and equal participants in the political process. Democracy and citizenship go hand in hand. Democracy focuses on political parties, electoral systems, rule of law, etc., while citizenship focuses on the attributes of individual citizens. Citizens have certain rights that differ from one country to another. Today, we are following a modern state and citizenship connotes a status which is defined as a set of rights and duties of the people.

Aristotle defined citizenship with reference to the birth place, family lineage and culture. Stoics viewed citizenship as a cosmopolitan ideal. Confucius emphasized it as the restoration of commonwealth, where everyone worked for harmony and welfare. In India too, there persisted the concept of “Vasudeva Kutumbakam”.

Citizenship and the City-state:

Citizenship was an important theme in the ancient Greek and Roman Republics but they disappeared from the feudal systems. This was later revived as a desirable aspect of civic humanism during the Renaissance. Citizenship was considered only as participation of duties during the ancient Athens.

Citizenship was considered as a pivotal importance to Aristotle as he perceives ideal state is possible only in law-based state where citizens are law abiding. He states that an individual is a political animal who finds fulfilment only within the polis and hence desiring for political posts is natural. He says that citizenship is a criterion wherein the rule must be applicable to all irrespective of whether they are residents, aliens or even slaves from other countries. A citizen is one who enjoys the right to share in the deliberative and judicial offices and is able to exercise his political rights effectively under the constitutional system.

Marshall, a liberal-social democrat links citizenship to social class in the context of capitalism. According to Marshall, citizenship has three essential divisions: civil, political and social. Every individual requires a right for freedom and that is what is in as civil component. This is also an important ingredient of rule of law. As a citizen we have the right to participate in political decision-making process. This is reflected in the political division. No citizen can be deprived of the prevailing

defines citizenship as “he who has the power to take part in the deliberative or judicial administration of any state.”

Greeks enjoyed the privilege of being governed by democracy; their government was made up of commoners, and they were allowed freedom of speech to a large extent through public speaking rights.

Standard of living and they have all the rights to enjoy the fruits of this. Hence, Marshall stresses upon the social services.

In this, we shall study about the influence of educ ation towards citizenship, according to various philosophers.

Aristotle considers three qualities to be necessary for a man universally. They are:

v   Loyalty to the constitution

v   High degree of capacity to one’s duties and

v   Quality of goodness and justice.

A democratic nation upholds political and economic equality for which identification between a good man and good citizen are always necessary.

Plato considers education is a cure to corruption and political instability. Hence, he speaks for effective and responsible form of education. Aristotle, Hume and Rousseau , point out that the citizens will need knowledge of the attitudes and the expectations of their fellow citizens. J.S. Mill and Tocqueville on the other hand stress upon the need of political knowledge and in order to participate and conduct the affairs of the local government, voluntary association or jury service, education is very much necessary.

India is a secular, democratic and nation state. Why do you think Independence Movement began? The main reason was to bind together people of different religions, regions and cultures. Though there were differences with the Muslim League during the Partition of the Country, yet this strengthened the Indian National Leaders to maintain the secular and inclusive character of the Indian Nation state. 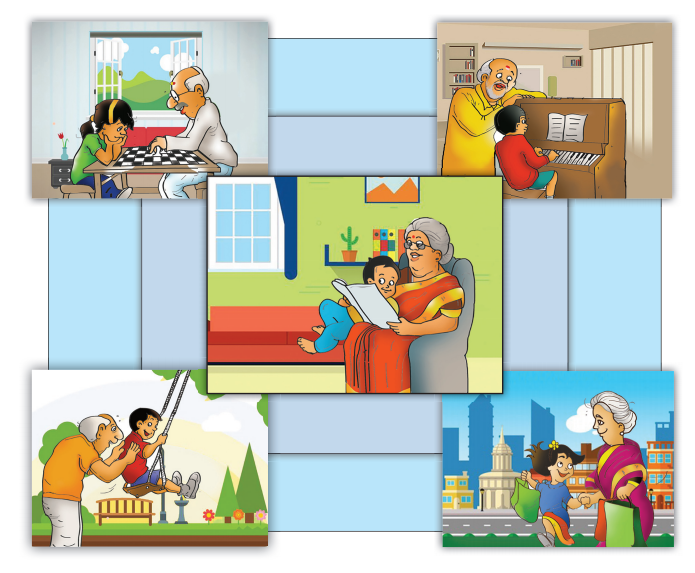 As son/daughter what is your role and responsibilities towards your Parents? Discuss in the class.

Actually embodied in the Constitution. The leaders were determined and joined to build the same. The Indian Constitution attempted to provide full citizenship to all irrespective of whichever groups they belonged to. Women, people from the Scheduled Castes and Tribes, remote communities from the Andaman and Nicobar Islands, who had not enjoyed equal rights previously, were given the full citizenship rights.. In India, Prepare a chart on your idea on the qualities of a good citizen and share it with your teacher and friends.

The provisions about citizenship are found in Part II and in the subsequent laws passed by the Parliament Citizenship can be acquired by birth, descent, registration, naturalisation or inclusion of territory. There is also a provision in the Constitution that the state should not discriminate against citizens on the grounds of race, caste, sex, place of birth, etc. The rights of religious and linguistic minorities are also protected.

National citizenship assumes that our state can provide us with protection and rights we need to live. However, states today are to tackle a lot of problems and hence individual rights are guaranteed to protect the safety of the people. Global citizenship on the other hand, deals with the importance of citizenship across the national boundaries. Here, one may need the cooperative action by the people and the governments of many states. 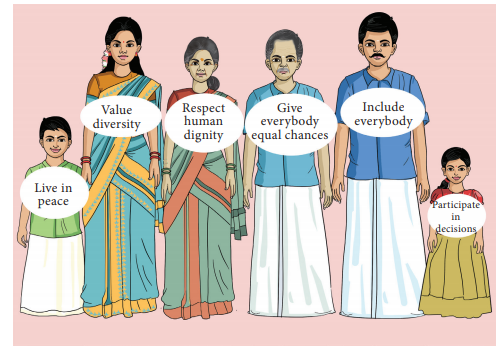 Therefore, citizenship for all can resolve many socio- economic inequalities. Moreover, global citizenship reminds us that we live in a world where the states are interconnected with each other and strengthening the links is most important.