In this method more than one stain is employed.

In this method more than one stain is employed. In some method the stains are applied separately, while in other method they are mixed and applied in one application. These procedures show differences between the cells or parts of a cell and can be used for of identification. The two most important differential stains used by bacteriologists are Gram stain and Acid Fast stain. The differences between simple and differential staining are shown in Table 3.3.

The Gram’s stain technique was developed by Danish Bacteriologist Hans Christian Gram in 1884. It is one of the most useful staining methods because it classifies bacteria into two large groups namely Gram positive and Gram negative. In this method, the fixed bacterial smear is subjected to staining reagents in the order of sequence listed below: 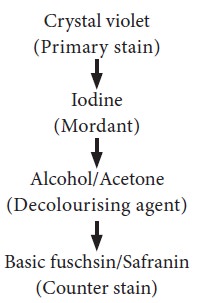 Mordants: Mordants are not dyes. They are important to increase the biological specimen’s affinity for a dye. Some stains never stain the cells or its components unless treated with a mordant. The mordant becomes attached to a cell or its components and then combines with the stain to form an insoluble colour complex.

Step 1: A heat fixed smear is covered with a basic violet dye, Example: Crystal violet. This stain imparts its colour to all cells. It is referred to as a primary stain, since it is applied first.

Step 2: After a short time, the slide is washed off and the smear is covered with iodine, a mordant. At this stage both Gram positive and Gram negative bacteria appear dark violet.

Step 3: Next, the slide is decolurized with alcohol or an acetone alcohol solution. This solution is a decolurizing agent, which removes the primary stain from the cells of some species but not from others.

Step 4: The slide is immediately washed after decolurization and the slide is then counter stained with basic fuchsin or safranin, a basic red dye. The smear is washed again, blot dried and examined under microscope (Figure 3.7). 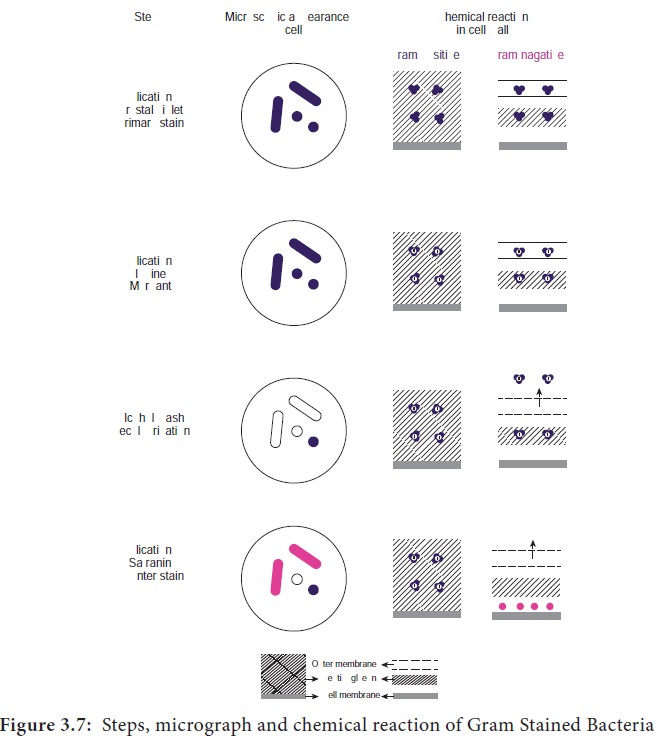 The exact mechanism of action of this staining technique is not clearly understood. However, the most acceptable explanations are associated with the structure and composition of the cell wall. 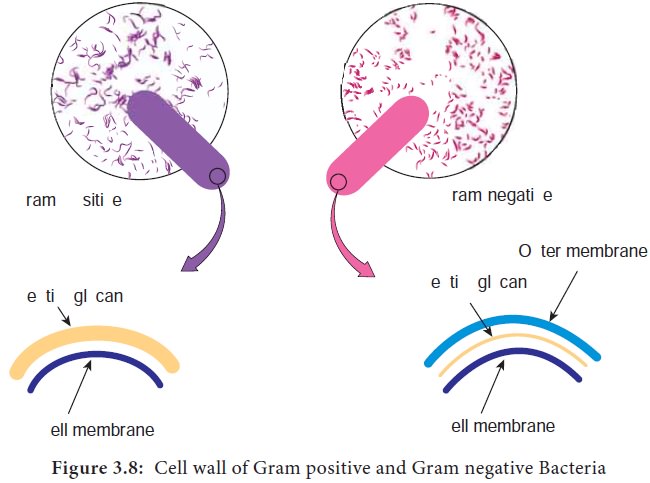 In addition, Gram negative bacteria contain a layer of lipo polysaccharide (consists of lipids and polysaccharide) as part of their cell wall. When Crystal violet and subsequently Iodine is applied to both Gram positive and Gram negative cells, the two combine to form CV-I complex.

The cell wall of Gram positive bacteria with lower lipid content get dehydrated during alcohol treatment. The pore size decreases and the permeability is reduced. Thus, the CV-I complex cannot be extracted and the cells remain violet.

The alcohol treatment of Gram negative bacteria extracts the lipid which results in increased porosity or permeability of the cell wall. Thus, the crystal violet iodine [CV-I] complex is extracted and the bacteria are decolorized. These cells subsequently take on the colour of the counter stain basic fuchsin or safranin and appears red to pink.

This century old staining method still remains as the universal basis for bacterial classification and identification. Even with today’s elaborate and expensive medical technology, the Gram’s staining remains an important, inexpensive and unbeatable tool in the identification of pathogens.

Examination of Gram stained organisms usually provides the basis for classifying, identifying and characterizing bacteria. Gram staining of clinical specimens, however provides only a preliminary indication of the identity of the etiological agent (the organism causing the disease). Gram nature of common pathogenic bacteria is given in Table 3.4.

Gram stains of clinical specimens or of growth on culture plates are especially important in determining the most effective antibiotic for the ill patients who required immediate therapy.