Diagnostic evaluation of the patient with allergic disorders com-monly includes blood tests, smears of body secretions, skin tests, and the radioallergosorbent test (RAST). Results of laboratory blood studies provide supportive data for various diagnostic pos-sibilities; however, they are not the major criteria for the diagno-sis of allergic disease.

High total serum IgE levels support the diagnosis of atopic dis-ease. A normal IgE level, however, does not exclude the diagno-sis of an allergic disorder. IgE levels are not as sensitive as the paper radioimmunosorbent test (PRIST) and the enzyme-linked immunosorbent assay (ELISA). Indications for determining IgE levels include the following:

·      Evaluation of allergy among children with bronchiolitis

·       Differentiation of atopic and nonatopic eczema

·       Differentiation of atopic and nonatopic asthma and rhinitis

Skin testing entails the intradermal injection or superficial appli-cation (epicutaneous) of solutions at several sites. Depending on the suspected cause of allergic signs and symptoms, several dif-ferent solutions may be applied at several separate sites. These so-lutions contain individual antigens representing an assortment of allergens, including pollen, most likely to be implicated in the pa-tient’s disease. Positive reactions (wheal and flare) are clinically significant when correlated with the history, physical findings, and results of other laboratory tests.

The results of skin tests complement the data obtained from the history. They indicate which of several antigens are most likely to provoke symptoms and provide some clue to the inten-sity of the patient’s sensitization. The dosage of the antigen (al-lergen) injected is also important. Most patients are hypersensitive to more than one pollen. Under testing conditions, they may not react (although they usually do) to the specific pollens that induce their attacks.

In cases of doubt about the validity of the skin tests, a RAST or a provocative challenge test may be performed. If a skin test is indicated, there is a reasonable suspicion that a specific allergen is producing symptoms in an allergic patient. Several precau-tionary steps, however, must be observed before skin testing with allergens:

·       Testing is not performed during periods of bronchospasm.

·      Epicutaneous tests (scratch or prick tests) are performed be-fore other testing methods in an effort to minimize the risk of systemic reaction.

·      Emergency equipment must be readily available to treat anaphylaxis.

The methods of skin testing include prick skin tests, scratch tests, and intradermal skin testing (Fig. 53-3). After prick or scratch tests, intradermal skin testing is performed with allergens that did not elicit positive reactions. Because a larger antigen challenge is being used, local or systemic reactions could occur if the same antigens that produced positive skin or scratch reactions are used. The back is the most suitable area of the body for skin testing be-cause it permits the performance of many tests. The multitest ap-plicator is a commercially available device with multiple test heads that allows simultaneous administration of antigens by multiple punctures at different sites. 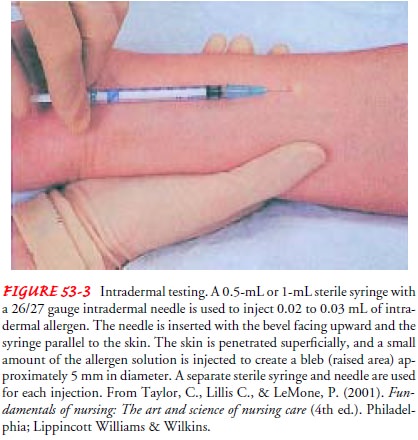 Familiarity with and consistent use of a grading system are es-sential. The grading system used should be identified on a skin test sheet for later interpretation. A positive reaction, evidenced by the appearance of an urticarial wheal (round, reddened skin elevation) (Fig. 53-4), localized erythema (diffuse redness) in the area of inoculation or contact, or pseudopodia (irregular projection at the end of a wheal) with associated erythema is considered indicative of sensitivity to the corresponding antigen. 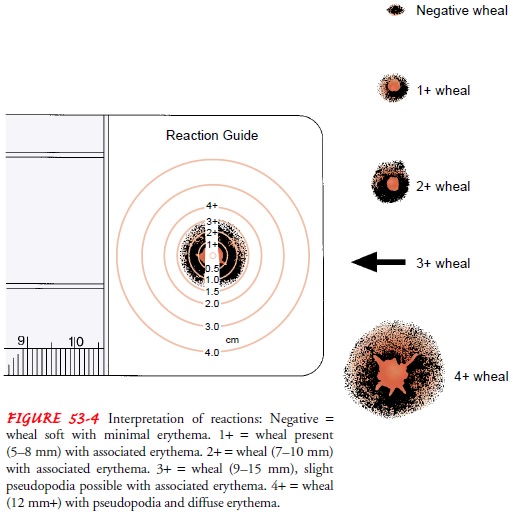 There may be false-negative results due to improper tech-nique, outdated allergen solutions, and prior use of medications that suppress skin reactivity. Corticosteroids and antihista-mines, including allergy medications, suppress skin test reactiv-ity and are usually withheld 48 to 96 hours before testing, depending on the duration of their activity. False-positive skin tests may result from improper preparation or administration of allergen solutions.

Provocative testing involves the direct administration of the sus-pected allergen to the sensitive tissue, such as the conjunctiva, nasal or bronchial mucosa, or gastrointestinal tract (by ingestion of the allergen) with observation of target organ response. This type of testing is helpful in identifying clinically significantaller-gens in patients with a large number of positive tests.Major dis-advantages of this type of testing are the limitation of one antigen per session and the risk of producing severe symptoms, particu-larly bronchospasm, in patients with asthma.

RAST is a radioimmunoassay that measures allergen-specific IgE. A sample of the patient’s serum is exposed to a variety of sus-pected allergen particle complexes. If antibodies are present, they will combine with radiolabeled allergens. After the serum is cen-trifuged, radioimmunoassay detects the allergen-specific IgE an-tibody. Test results are then compared with control values. In addition to detecting an allergen, RAST indicates the quantity of allergen necessary to evoke an allergic reaction. Values are re-ported on a scale from 0 to 5. Values of 2+ or greater are consid-ered significant. The major advantages of RAST over other tests include decreased risk of systemic reaction, stability of antigens, and lack of dependence on skin reactivity modified by medications. The major disadvantages include the limited allergen se-lection, reduced sensitivity compared with intradermal skin tests, lack of immediate results, and cost.