Anaphylaxis is a clinical response to an immediate (type I hyper-sensitivity) immunologic reaction between a specific antigen and an antibody.

Anaphylaxis is a clinical response to an immediate (type I hyper-sensitivity) immunologic reaction between a specific antigen and an antibody. The reaction results from IgE antibody. An ana-phylactic reaction can be triggered by exposure to an antigen through inhalation, injection, ingestion, or skin contact. It is a se-vere, life-threatening allergic reaction. It is estimated that 3.3 to 43 million persons in the United States (1.24% to 16.8% of the population) are at risk for anaphylaxis (Neugut, Ghatak & Miller, 2001).

Anaphylaxis is caused by the interaction of a foreign antigen with specific IgE antibodies found on the surface membrane of mast cells and peripheral blood basophils. The subsequent re-lease of histamine and other bioactive mediators causes acti-vation of platelets, eosinophils, and neutrophils and the coagulation cascade. Smooth muscle spasm, bronchospasm, mucosal edema and inflammation, and increased capillary per-meability result. These systemic changes characteristically pro-duce clinical manifestations within seconds or minutes of antigen exposure (Neugut et al., 2001). Closely related to ana-phylaxis is an anaphylactoid (anaphylaxis-like) reaction, which is described in Chart 53-2. 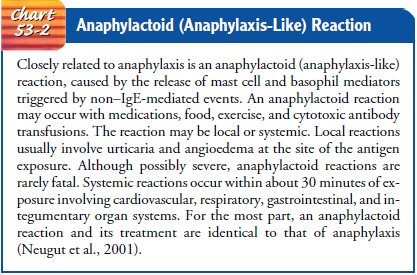 Substances that most commonly cause anaphylaxis include foods, medications, insect stings, and latex (Chart 53-3). Foods that are common causes of anaphylaxis include peanuts, tree nuts, shellfish, fish, milk, eggs, soy, and wheat. Many medications have been implicated in anaphylaxis. Those that are most frequently reported include antibiotics (including penicillin), radiocontrast agents, intravenous anesthetics, aspirin and other nonsteroidal anti-inflammatory drugs (NSAIDs), and opioids. Antibiotics and radiocontrast agents cause the most serious anaphylactic reac-tions, producing reactions in about 1 of every 5,000 exposures. Penicillin is the most common cause of anaphylaxis and accounts for about 75% of fatal anaphylactic reactions in the U.S. each year (Neugut et al., 2001). 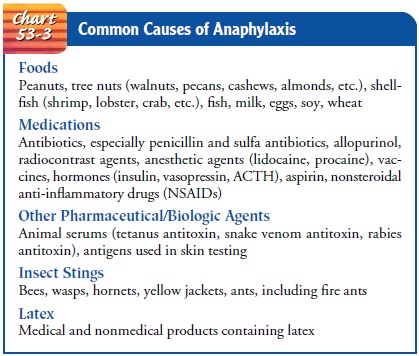 Anaphylactic reactions may be categorized as mild, moderate, and severe systemic reactions. The time from exposure to the antigen to onset of symptoms is a good indicator of the severity of the re-action: the faster the onset, the more severe the reaction (Neugut et al., 2001).

Mild systemic reactions consist of peripheral tingling and a sensation of warmth, possibly accompanied by fullness in the mouth and throat. Nasal congestion, periorbital swelling, pruri-tus, sneezing, and tearing of the eyes can also be expected. Onset of symptoms begins within the first 2 hours of exposure.

Moderate systemic reactions may include flushing, warmth, anxiety, and itching in addition to any of the above symptoms.

More serious reactions include bronchospasm and edema of the airways or larynx with dyspnea, cough, and wheezing. The onset of symptoms is the same as for a mild reaction.

If avoidance of exposure to allergens is impossible, adminis-tration of epinephrine is a critical measure to prevent an anaphy-lactic reaction. People sensitive to insect bites and stings, those who have experienced food or medication reactions, and those who have experienced idiopathic or exercise-induced anaphylac-tic reactions should always carry an emergency kit that contains epinephrine. The EpiPen from Dey Pharmaceuticals is a com-mercially available first-aid device that delivers premeasured doses of 0.3 mg (Epipen) and 0.15 mg (Epipen Jr.) of epinephrine (Fig. 53-5). The autoinjection system requires no preparation, and the self-administration technique is uncomplicated. The patient must be given an opportunity to demonstrate the correct tech-nique for use; an Epipen training device is available. Verbal and written information about the emergency kit, as well as strategies to avoid exposure to threatening allergens, must also be provided. 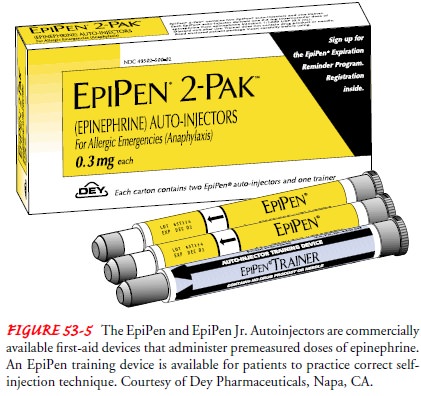 Screening for allergies before a medication is prescribed or first administered is an important preventive measure. A careful his-tory of any sensitivity to suspected antigens must be obtained be-fore administering any medication, particularly in parenteral form, because this route is associated with the most severe ana-phylaxis. Nurses caring for patients in any setting (hospital, home, outpatient diagnostic testing sites, long-term care facilities) must assess patients’ risk for anaphylactic reactions. The patient is asked about previous exposure to contrast agents used for diagnostic tests and any allergic reactions, as well as reactions to any medications, foods, insect stings, and latex.

Persons predisposed to anaphylaxis should wear some form of identification, such as a medical alert bracelet, naming allergies to medications, food, and other substances.

People who are allergic to insect venom may require venom im-munotherapy, which is used as a control measure and not a cure. Immunotherapy following an insect sting is very effective in re-ducing the risk of anaphylaxis from future stings (Neugut et al., 2001). Insulin-allergic diabetic patients and penicillin-sensitive patients may require desensitization. Desensitization is based on controlled anaphylaxis, with a gradual release of mediators. Pa-tients who undergo desensitization are cautioned that there should be no lapses in therapy, because this may lead to the reappearance of an allergic reaction when the medication is reinstituted.

Management depends on the severity of the reaction. Initially, respiratory and cardiovascular functions are evaluated. If the pa-tient is in cardiac arrest, cardiopulmonary resuscitation is insti-tuted. Oxygen is provided in high concentrations during cardiopulmonary resuscitation or when the patient is cyanotic, dyspneic, or wheezing. Epinephrine, in a 1 1,000 dilution, is ad-ministered subcutaneously in the upper extremity or thigh and may be followed by a continuous intravenous infusion. Antihis-tamines and corticosteroids may also be given to prevent recur-rences of the reaction and to treat urticaria and angioedema. To maintain blood pressure and normal hemodynamic status, IV flu-ids (ie, normal saline solution), volume expanders, and vasopres-sor agents are given. In patients with episodes of bronchospasm or a history of bronchial asthma or chronic obstructive pul-monary disease, aminophylline and corticosteroids may also be administered to improve airway patency and function. If hy-potension is unresponsive to vasopressors, intravenous glucagon may be given for its acute inotropic and chronotropic effects. Pa-tients with severe reactions are observed closely for 12 to 14 hours. Because of the potential for recurrence, patients with even mild reactions must be educated concerning this risk.

If a patient is experiencing an allergic response, the nurse’s initial action is to assess the patient for signs and symptoms of anaphy-laxis. The nurse assesses the airway, breathing pattern, and other vital signs. The patient is observed for signs of increasing edema and respiratory distress. Prompt notification of the physician and preparation for initiation of emergency measures (intubation, administration of emergency medications, insertion of intra-venous lines, fluid administration, oxygen administration) are important to reduce the severity of the reaction and to restore car-diovascular function. The nurse documents the interventions used and the patient’s response to treatment, vital signs, and lab-oratory values.

The patient who has recovered from anaphylaxis needs an ex-planation of what occurred and instruction about avoiding future exposure to antigens and administering emergency medications to treat anaphylaxis. The patient must be instructed about anti-gens that should be avoided and about other strategies to prevent recurrence of anaphylaxis. All patients who have experienced an anaphylactic reaction should receive a prescription for preloaded syringes of epinephrine. The nurse instructs the patient and fam-ily in their use and has the patient and family demonstrate correct administration (Chart 53-4).