Development of the Ovary 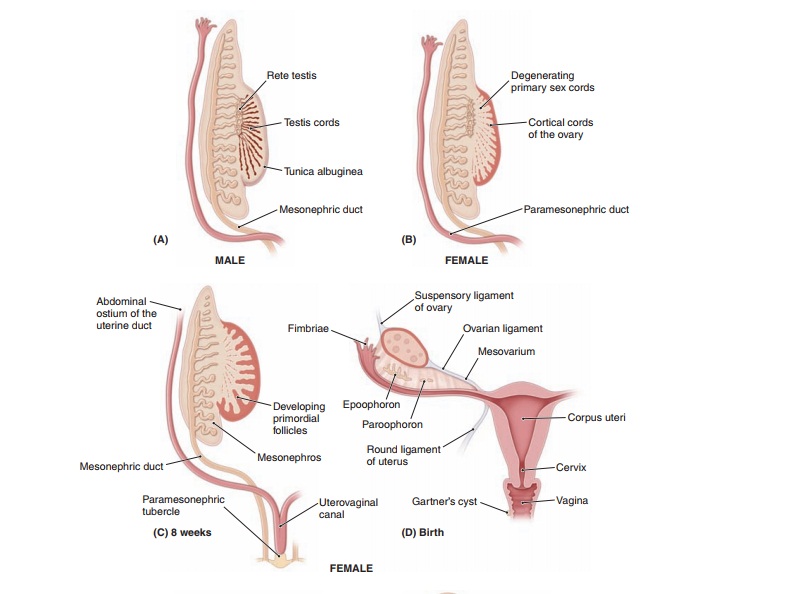 Ovaries are homologous to the testes in the male. Bothtypes of gonads begin development as gonadal or genitalridges that form during the 5th week of gestation from theurogenital ridges.

Development of the Ovary

Ovaries are homologous to the testes in the male. Bothtypes of gonads begin development as gonadal or genitalridges that form during the 5th week of gestation from theurogenital ridges. Fingerlike bands of epithelial cells pro-ject from the surface of the gonad into each gonadal ridge, forming irregularly shaped primary sex cords. Growth of these cords into the gonadal ridge results in the creation of an outer cortex and an inner medulla in the indifferent gonad. 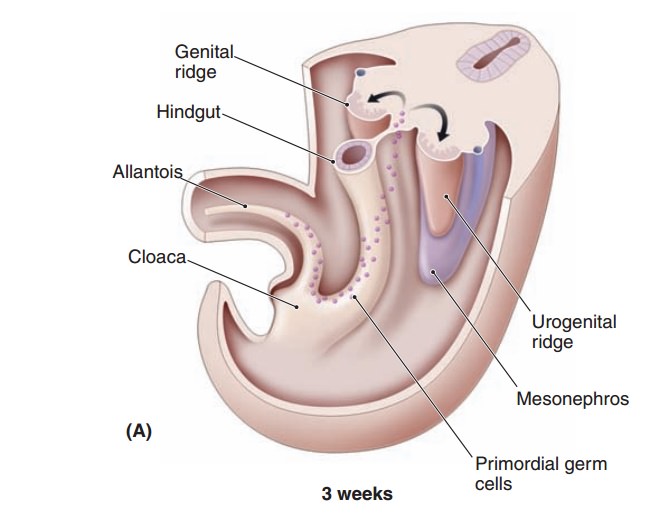 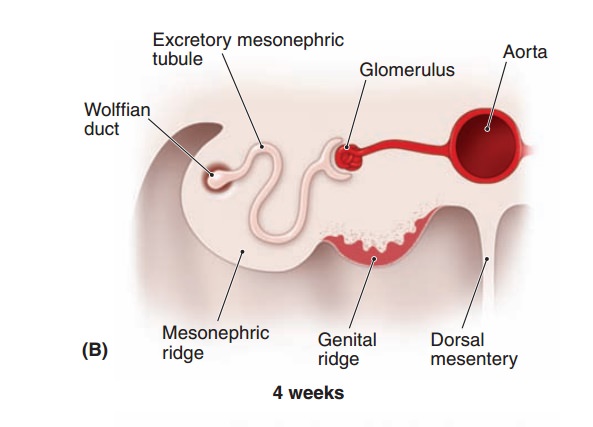 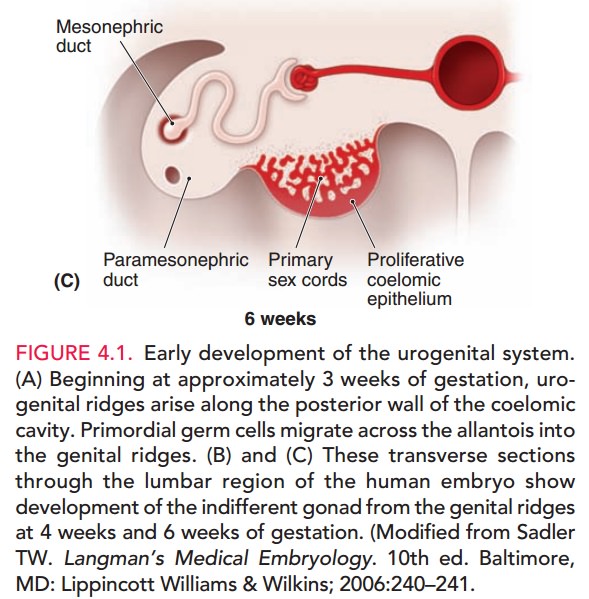 By approximately the 10th week of development, the undifferentiated gonad has developed into an identifi-able ovary. Primary sex cords degenerate, and secondary sex cords or cortical cords appear. These cords extend from the surface epithelium into the underlying mesenchyme (Fig. 4.2, right column of figure). By approximately 16 weeks of gestation, cortical cords in the ovary organize into primordial follicles.

Each follicle eventually consists ofan oogonium, derived from a primary germ cell, sur-rounded by a single layer of squamous follicular cells, derived from the cortical cords. Follicular maturation begins when the oogonia enter the first stage of meiotic division (at which point they are called primary oocytes). Oocyte development is then arrested until puberty, when one or more follicles are stimulated to continue development each month.

In male embryos, the primary sex cords do not degen-erate; instead, they develop into seminiferous (or testis) cords that eventually give rise to the rete testis and semi-niferous tubules (see Fig. 4.2, left column of figure). A layer of dense connective tissue (the tunica albuginea) separates the seminiferous cords from the surface epithe-lium, which eventually becomes the testis. Cortical cords do not form in the male embryo. 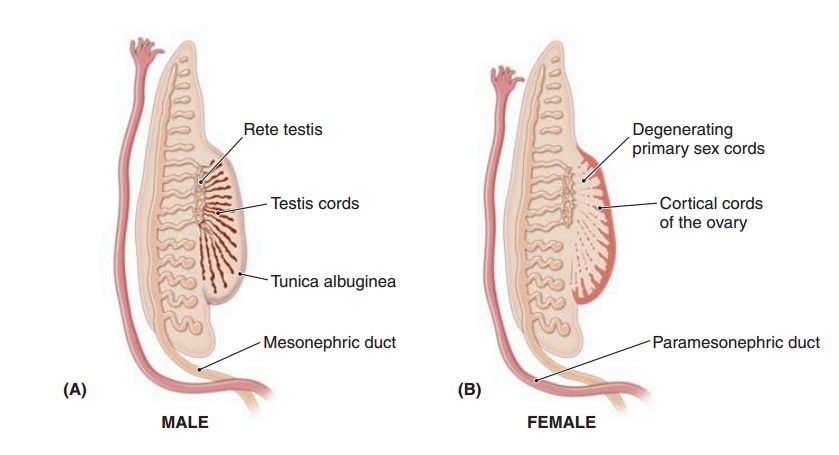 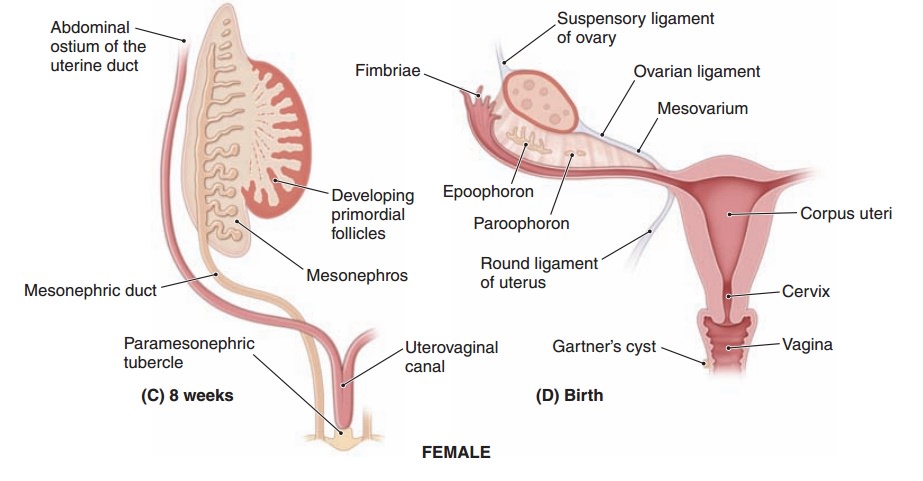 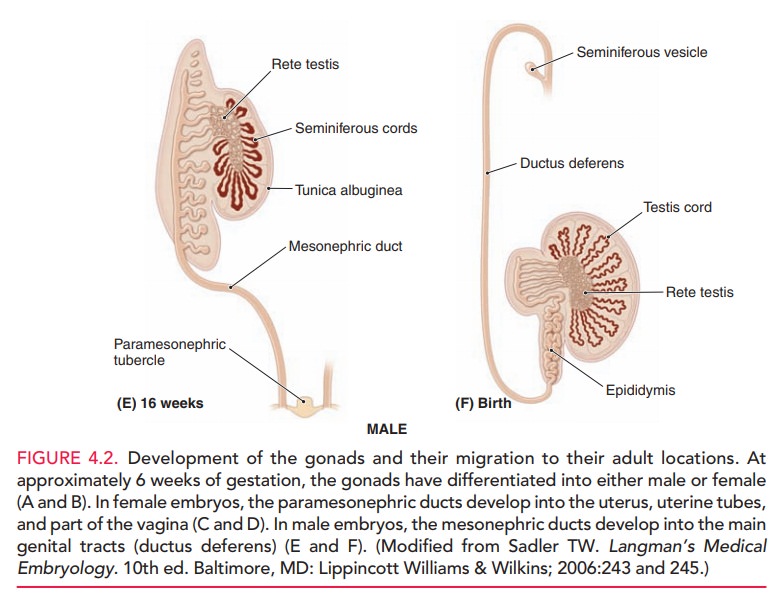 As they develop, gonads descend from their starting point high up in the primitive body cavity, where they are attached to a mesenchymal condensation called the gubernaculum. Ovaries move caudally to a location justbelow the rim of the true pelvis immediately adjacent to the fimbriated end of the fallopian tubes. The testis, on the other hand, continues to descend, eventually migrating through the anterior abdominal wall just superior to the inguinal ligament. The gubernaculum in the female fetus eventually forms the ovarian and round ligaments (see Fig. 4.2 and Fig. 4.3). 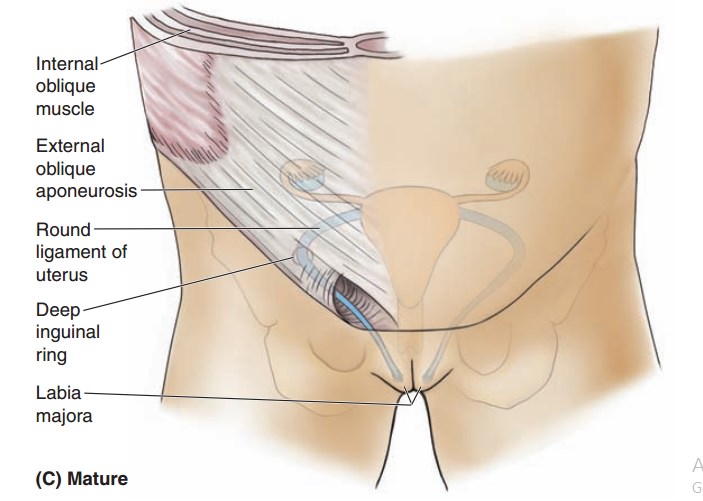