The bony pelvis is composed of the paired innominate bones and the sacrum.

The bony pelvis is composed of the paired innominate bones and the sacrum. The innominate bones are joined anteriorly to form the symphysis pubis, and each is artic-ulated posteriorly with the sacrum through the sacroiliac joint (Fig. 4.6). The sacrum is composed of five or six sacral vertebrae, which are fused in adulthood. The sacrum articulates with the coccyx inferiorly and with the fifth lumbar vertebra superiorly.

In obstetrics, it is important to assess the size of the pelvis to determine whether it is of adequate capacity for vaginal birth. This evaluation is based on the diameters of the pelvic outlet, pelvic inlet, and midpelvis. Measurement of these diameters is called pelvimetry and can be made radiograph-ically, with computed tomography (the most accurate method), or during a pelvic examination. One of the most important measurements is that of the obstetrical conju-gate (Fig. 4.7), which is the narrowest fixed distance throughwhich the fetal head must pass during a vaginal delivery. 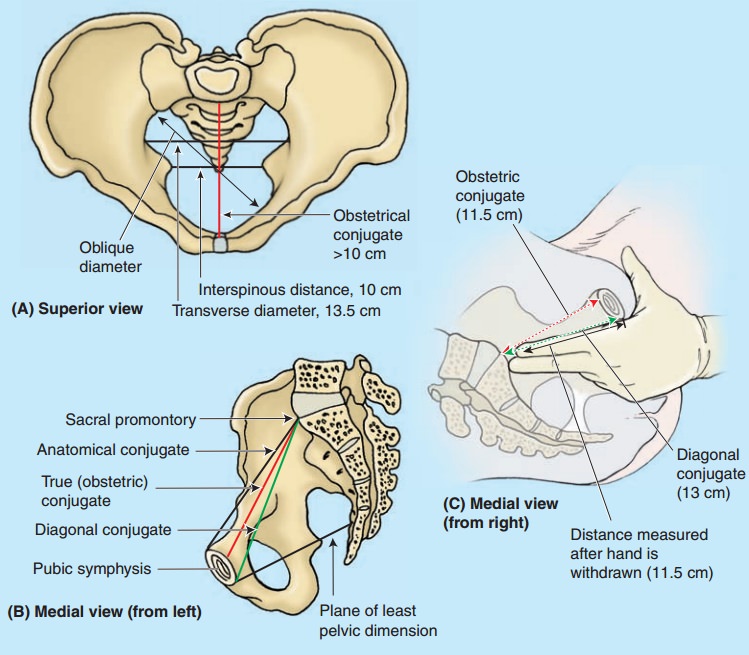 The obstetric conjugate cannot be measured directly due to the presence of the bladder.

It is calculated indirectly by measuring the diagonalconjugate, which is the distance between the lower bor-der of the pubis anteriorly to the lower sacrum at the level of the ischial spines. The obstetric conjugate is 1.5 to 2 cm shorter. In general, it should be 11.0 cm or greater to accommodate a fetal head of normal size. Other measure-ments include the interspinous diameter (the distance between the ischial spines) and transverse diameter (the distance measured at the greatest width of the superior aperture). 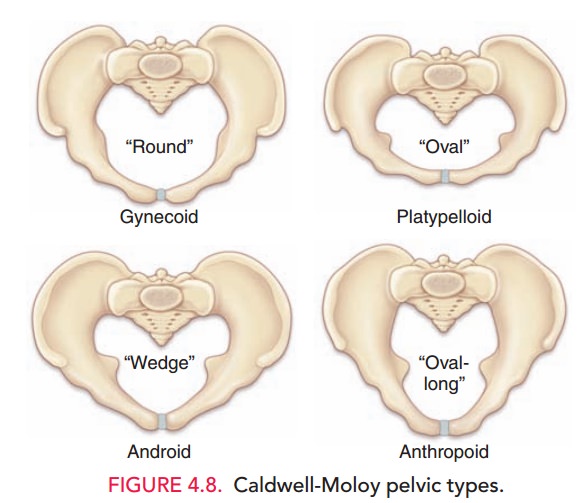