Diseases of the skin offer special opportunities to the clinician. In particular, the topical administration route is especially appropriate for skin diseases, although some dermatologic diseases respond as well or better to drugs administered systemically.

Diseases of the skin offer special opportunities to the clinician. In particular, the topical administration route is especially appropriate for skin diseases, although some dermatologic diseases respond as well or better to drugs administered systemically.

The general pharmacokinetic principles governing the use of drugs applied to the skin are the same as those involved in other routes of administration. Although often depicted as a simple three-layered structure (Figure 61–1), human skin is a complex series of diffusion barriers. Quantitation of the flux of drugs and drug vehicles through these barriers is the basis for pharmacokinetic analysis of dermatologic therapy, and tech-niques for making such measurements are rapidly increasing in number and sensitivity. 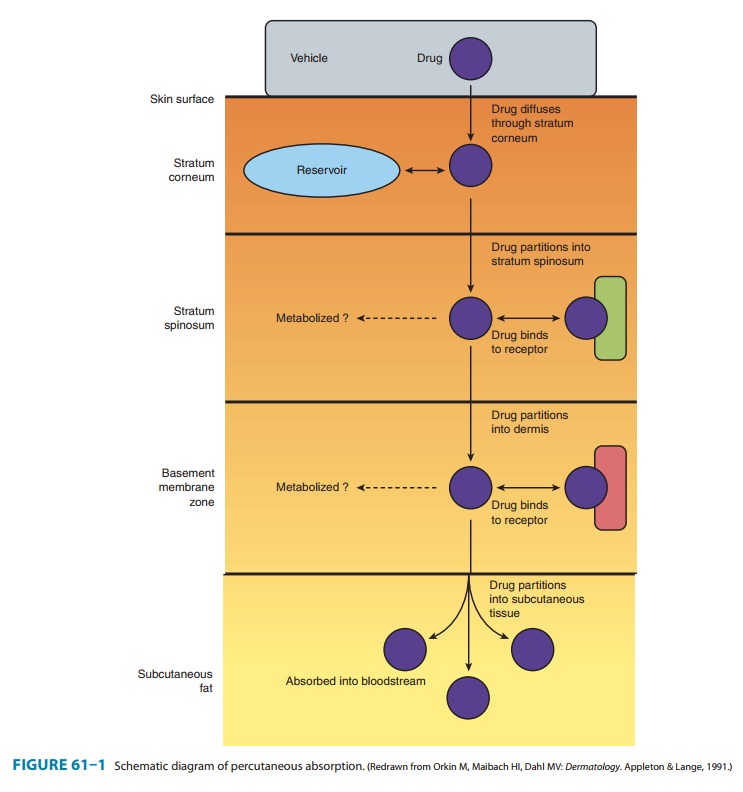 Major variables that determine pharmacologic response to drugs applied to the skin include the following:

Regional variation in drug penetration: For example, thescrotum, face, axilla, and scalp are far more permeable than the forearm and may require less drug for equivalent effect.

Concentration gradient: Increasing the concentration gradi-ent increases the mass of drug transferred per unit time, just as in the case of diffusion across other barriers . Thus, resistance to topical corticosteroids can sometimes be overcome by use of higher concentrations of drug.

Vehicles and occlusion: An appropriate vehicle maximizes theability of the drug to penetrate the outer layers of the skin. In addition, through their physical properties (moistening or dry-ing effects), vehicles may themselves have important therapeu-tic effects. Occlusion (application of a plastic wrap to hold the drug and its vehicle in close contact with the skin) is extremely effective in maximizing efficacy.

The skin reacts to many systemic medications with a variety of symptom-generating responses. In addition, some dermatologic medications themselves cause skin reactions. The major types of reactions are summarized in Table 61–1. 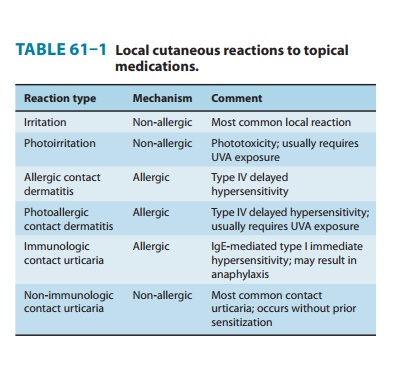 A 22-year-old woman presents with a complaint of worsen-ing psoriasis. She has a strong family history of the disease and has had lesions on her scalp and elbows for several years. She recently noted new lesions developing on her knees andthe soles of her feet. She has been using topical over-the-counter hydrocortisone cream but admits that this treatment does not seem to help. What therapeutic options are available for the treatment of this chronic disease?

A 21-year-old woman comes with her parents to discuss therapeutic options for her Crohn’s disease. She was diag-nosed with Crohn’s disease 2 years ago, and it involves her terminal ileum and proximal colon, as confirmed by colonos-copy and small bowel radiography. She was initially treated with mesalamine and budesonide with good response, but over the last 2 months, she has had a relapse of her symp-toms. She is experiencing fatigue, cramping, abdominal pains, and nonbloody diarrhea up to 10 times daily, and she has had a 15-lb weight loss.She has no other significant medical or surgical history. Her current medications are mesalamine 2.4 g/d and budes-onide 9 mg/d. She appears thin and tired. Abdominal exam-ination reveals tenderness without guarding in the right lower quadrant; no masses are palpable. On perianal exami-nation, there is no tenderness, fissure, or fistula. Her labora-tory data are notable for anemia and elevated C-reactive protein. What are the options for immediate control of her symptoms and disease? What are the long-term management options?