The remarkable efficacy of topical corticosteroids in the treatment of inflammatory dermatoses was noted soon after the introduction of hydrocortisone in 1952.

The remarkable efficacy of topical corticosteroids in the treatment of inflammatory dermatoses was noted soon after the introduction of hydrocortisone in 1952. Numerous analogs are now availablethat offer extensive choices of potencies, concentrations, and vehicles. The therapeutic effectiveness of topical corticosteroids is based primarily on their anti-inflammatory activity. Definitive explanations of the effects of corticosteroids on endogenous mediators of inflammation await further experimental clarifica-tion. The antimitotic effects of corticosteroids on human epider-mis may account for an additional mechanism of action in psoriasis and other dermatologic diseases associated with increased cell turnover. 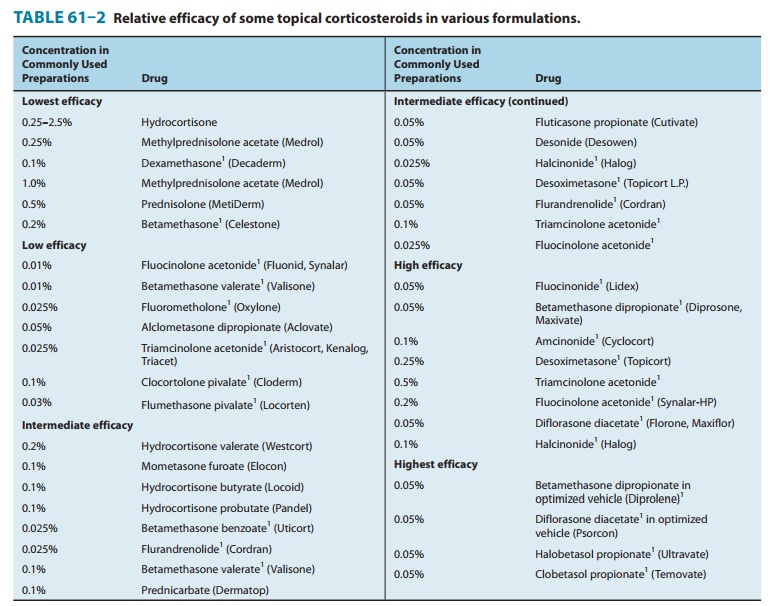 Experimental studies on the percutaneous absorption of hydro-cortisone fail to reveal a significant increase in absorption when applied on a repetitive basis and a single daily application may be effective in most conditions. Ointment bases tend to give better activity to the corticosteroid than do cream or lotion vehicles. Increasing the concentration of a corticosteroid increases the pen-etration but not proportionately. For example, approximately 1% of a 0.25% hydrocortisone solution is absorbed from the forearm. A 10-fold increase in concentration causes only a fourfold increase in absorption. Solubility of the corticosteroid in the vehicle is a significant determinant of the percutaneous absorption of a topi-cal steroid. Marked increases in efficacy are noted when optimized vehicles are used, as demonstrated by newer formulations of betamethasone dipropionate and diflorasone diacetate.

Table 61–2 groups topical corticosteroid formulations accord-ing to approximate relative efficacy. Table 61–3 lists major derma-tologic diseases in order of their responsiveness to these drugs. In the first group of diseases, low- to medium-efficacy corticosteroid preparations often produce clinical remission. In the second group, it is often necessary to use high-efficacy preparations, occlusion therapy, or both. Once a remission has been achieved, every effort should be made to maintain the improvement with a low-efficacy corticosteroid. 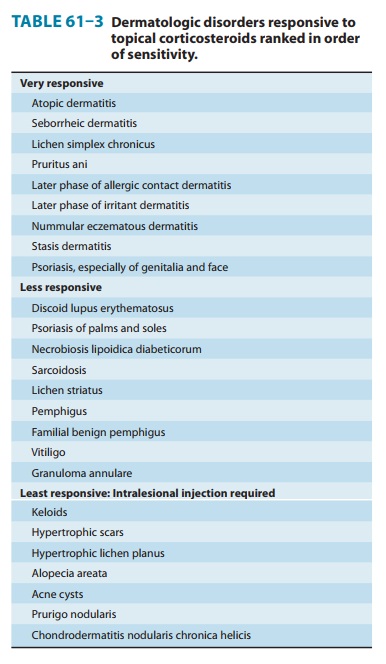 The limited penetration of topical corticosteroids can be over-come in certain clinical circumstances by the intralesional injec-tion of relatively insoluble corticosteroids, eg, triamcinolone acetonide, triamcinolone diacetate, triamcinolone hexacetonide,and betamethasone acetate-phosphate. When these agents are injected into the lesion, measurable amounts remain in place and are gradually released for 3–4 weeks. This form of therapy is often effective for the lesions listed in Table 61–3 that are generally unresponsive to topical corticosteroids. The dosage of the triam-cinolone salts should be limited to 1 mg per treatment site, ie, 0.1 mL of 10 mg/mL suspension, to decrease the incidence of local atrophy .

Iatrogenic Cushing’s syndrome may occur as a result of protracted use of topical corticosteroids in large quanti-ties. Applying potent corticosteroids to extensive areas of the body for prolonged periods, with or without occlusion, increases the likelihood of systemic effects. Fewer of these factors are required to produce adverse systemic effects in children, and growth retar-dation is of particular concern in the pediatric age group.

testing with high concentrations of corticosteroids, ie, 1% in pet-rolatum, because topical corticosteroids are not irritating. Screening for allergic contact dermatitis potential is performed with tixocor-tol pivalate, budesonide, and hydrocortisone valerate or butyrate. Topical corticosteroids are contraindicated in individuals who demonstrate hypersensitivity to them. Some sensitized subjects develop a generalized flare when dosed with adrenocorticotropic hormone or oral prednisone.

Tar preparations are used mainly in the treatment of psoriasis, dermatitis, and lichen simplex chronicus. The phenolic constitu-ents endow these compounds with antipruritic properties, making them particularly valuable in the treatment of chronic lichenified dermatitis. Acute dermatitis with vesiculation and oozing may be irritated by even weak tar preparations, which should be avoided. However, in the subacute and chronic stages of dermatitis and psoriasis, these preparations are quite useful and offer an alterna-tive to the use of topical corticosteroids.

The most common adverse reaction to coal tar compounds is an irritant folliculitis, necessitating discontinuance of therapy to the affected areas for a period of 3–5 days. Photoirritation and allergic contact dermatitis may also occur. Tar preparations should be avoided in patients who have previously exhibited sensitivity to them.