The densitometric method assumes that the body consists of two components, a fat mass, in which all “chemical” fat is located, and the FFM, which consists of (fat-free) bones, muscles, water, and organs.

The densitometric method assumes that the body consists of two components, a fat mass, in which all “chemical” fat is located, and the FFM, which consists of (fat-free) bones, muscles, water, and organs. Chemically, the FFM consists of water, minerals, protein, and a small amount of carbohydrate, the last often being neglected. The density of the fat mass is 0.900 kg/l and, from carcass analysis data, the density of the FFM can be calculated as 1.100 kg/l, depending on the relative amount of minerals, protein, and water in the FFM.

Body density can be determined by several tech-niques, the oldest and perhaps most accurate being underwater weighing. Behnke first used the tech-nique, showing that excess body weight in American football players was not the result of excess fat but of enlarged muscle mass.

In underwater weighing, the weight of the subject is first measured in air and then while totally immersed in water. The difference between weight in air and weight under water is the upwards force, which equals the weight of the displaced water (Archimedes’ law), from which, after correction for the water tempera-ture (density), the displaced water volume (and thus the body volume) can be calculated. Corrections must be made for residual lung volume and air in the gut. Figure 2.1 shows an underwater weighing. The technique gives very reproducible results within about 1% of BF%. The absolute error in determined body 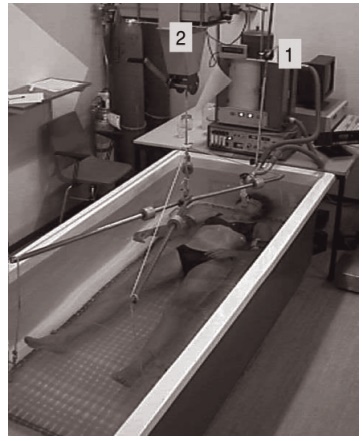 Figure 2.1 Underwater weighing. The subject is submerged com-pletely and breathes via a respirometer (1) for simultaneous residual lung volume measurement. Weight (W) (2) under water (uw) is recorded and density (D) is calculated as Dbody = Wair/(Wair − Wuw). Corrections are made for water temperature and lung volume: percent-age of fat in the body = 495/Dbody − 450.

fat is assumed to be maximal 3% of BF%. This error is mainly due to violation of the assumption that the density of the FFM equals 1.100 kg/l in the subject under study. It can be argued that in certain subjects or groups of subjects this assumption may be vio-lated, as for example in young children and in preg-nant women. Use of Siri’s formula will then lead to biased conclusions. Some laboratories have attempted to use water displacement instead of underwater weighing, but the technique failed, mainly because of the difficulty in accurately reading the water level in the tank.

An air-displacement method has been commer-cially available since 1995. This method measures body volume after placing the subject in a small, air-tight chamber and increasing the pressure by adding a known amount of air into the chamber. Boyle Gay-Lussac’s law enables the calculation of body volume. Corrections are made for temperature and humidity changes, and lung volume is assessed simultaneously.

Research to date has generally shown good agreement between underwater weighing and air displacement. Air displacement is better accepted by the volunteers, but some experience difficulties because of the breathing pattern to be followed or because of claustrophobia.