A hash function maps a variable-length message into a fixed-length hash value, or message digest.

◆     A hash function maps a variable-length message into a fixed-length hash value, or message digest.

◆     Virtually all cryptographic hash functions involve the iterative use of a compression function.

◆     The compression function used in secure hash algorithms falls into one of two categories: a function specifically designed for the hash function or an algorithm based on a symmetric block cipher. SHA and Whirlpool are examples of these two approaches, respectively.

A hash function H accepts a variable-length block of data M as input and produces a fixed-size hash value h = H(M). A “good” hash function has the property that the results of applying the function to a large set of inputs will produce outputs that are evenly distributed and apparently random. In general terms, the principal object of a hash function is data integrity. A change to any bit or bits in M results, with high probability, in a change to the hash code.

The kind of hash function needed for security applications is referred to as a cryptographic hash function. A cryptographic hash function is an algorithm for which it is computationally infeasible (because no attack is significantly more efficient than brute force) to find either (a) a data object that maps to a pre-specified hash result (the one-way property) or (b) two data objects that map to the same hash result (the collision-free property). Because of these characteristics, hash functions are often used to determine whether or not data has changed.

Figure 11.1 depicts the general operation of a cryptographic hash function. Typically, the input is padded out to an integer multiple of some fixed length (e.g., 1024 bits), and the padding includes the value of the length of the original message in bits. The length field is a security measure to increase the difficulty for an attacker to produce an alternative message with the same hash value. 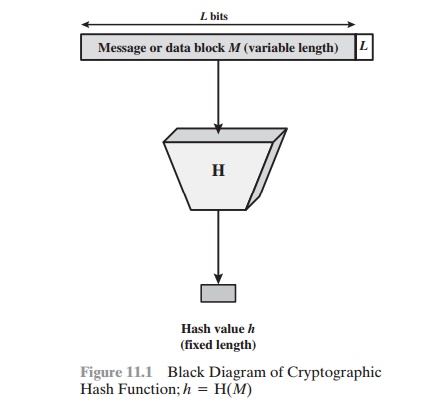