Perhaps the most versatile cryptographic algorithm is the cryptographic hash function. It is used in a wide variety of security applications and Internet protocols.

Figure 11.2 illustrates a variety of ways in which a hash code can be used to provide message authentication, as follows. 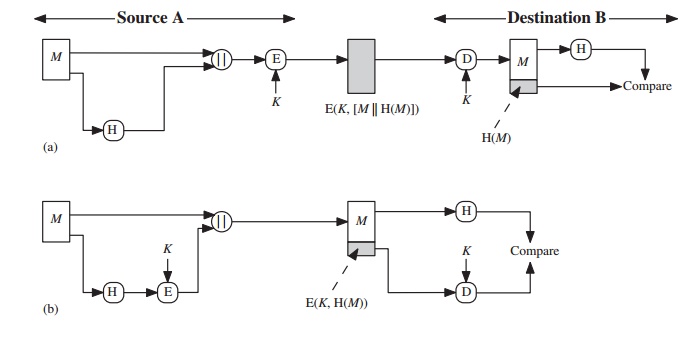 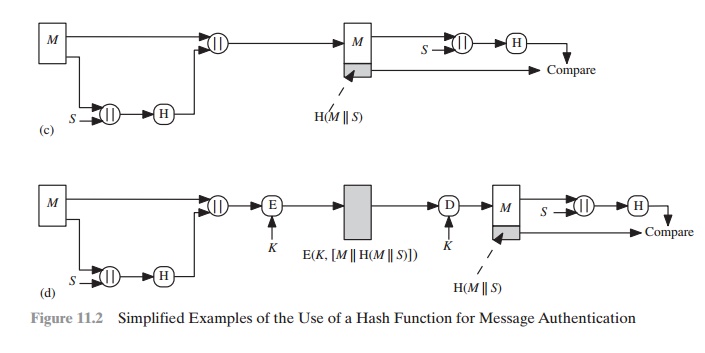 It is possible to use a hash function but no encryption for message authentication. The technique assumes that the two communicating parties share a common secret value S.A computes the hash value over the concatenation of M and S and appends the resulting hash value to M. Because B possesses S, it can recompute the hash value to verify. Because the secret value itself is not sent, an opponent cannot modify an intercepted message and cannot generate a false message.

When confidentiality is not required, method (b) has an advantage over methods

(a)        and (d), which encrypts the entire message, in that less computation is required. Nevertheless, there has been growing interest in techniques that avoid encryption (Figure 11.2c). Several reasons for this interest are pointed out in [TSUD92].

•               Encryption software is relatively slow. Even though the amount of data to be encrypted per message is small, there may be a steady stream of messages into and out of a system.

•               Encryption hardware costs are not negligible. Low-cost chip implementations of DES are available, but the cost adds up if all nodes in a network must have this capability.

•               Encryption hardware is optimized toward large data sizes. For small blocks of data, a high proportion of the time is spent in initialization/invocation overhead.

•               Encryption algorithms may be covered by patents, and there is a cost associated with licensing their use.

More commonly, message authentication is achieved using a message authentica- tion code (MAC), also known as a keyed hash function. Typically, MACs are used between two parties that share a secret key to authenticate information exchanged between those parties. A MAC function takes as input a secret key and a data block and produces a hash value, referred to as the MAC. This can then be transmitted with or stored with the protected message. If the integrity of the message needs to be checked, the MAC function can be applied to the message and the result compared with the stored MAC value. An attacker who alters the message will be unable to alter the MAC value without knowledge of the secret key. Note that the verifying party also knows who the sending party is because no one else knows the secret key.

Note that the combination of hashing and encryption results in an overall function that is, in fact, a MAC (Figure 11.2b). That is, E(K, H(M)) is a function of a variable-length message M and a secret key K, and it produces a fixed-size output that is secure against an opponent who does not know the secret key. In practice, specific MAC algorithms are designed that are generally more efficient than an encryption algorithm.

We discuss MACs in Chapter  12.

Figure 11.3 illustrates, in a simplified fashion, how a hash code is used to provide a digital signature.

Hash functions can be used for intrusion detection and virus detection. Store H(F) for each file on a system and secure the hash values (e.g., on a CD-R that  is 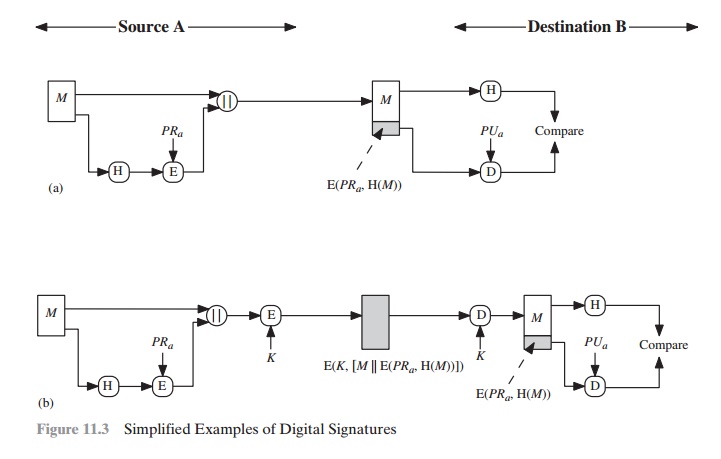 kept secure). One can later determine if a file has been modified by recomputing H(F). An intruder would need to change F without changing H(F).

A cryptographic hash function can be used to construct a pseudorandom func- tion (PRF) or a pseudorandom number generator (PRNG). A common application for a hash-based PRF is for the generation of symmetric keys. We discuss this appli- cation in Chapter 12.