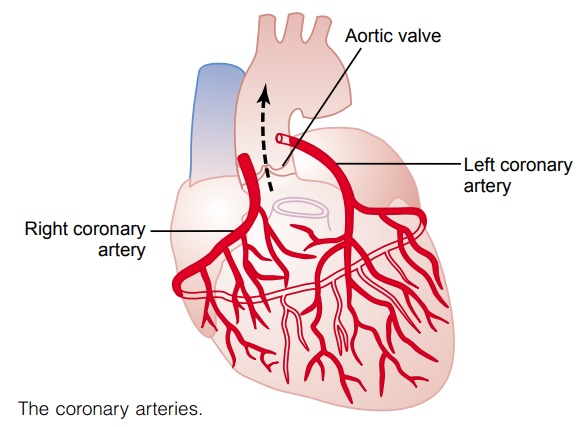 About one third of all deaths in the affluent society of the Western world result from coronary artery disease, and almost all elderly people have at least some impairment of the coronary artery circulation. 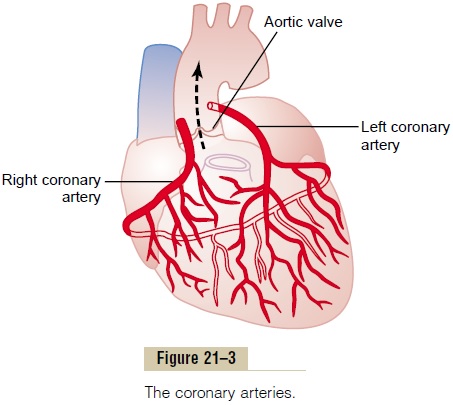 Figure 21–3 shows the heart and its coronary blood supply. Note that the main coronary arteries lie on the surface of the heart and smaller arteries then pene-trate from the surface into the cardiac muscle mass. It is almost entirely through these arteries that the heart receives its nutritive blood supply. Only the inner 1/10 millimeter of the endocardial surface can obtain sig-nificant nutrition directly from the blood inside the cardiac chambers, so that this source of muscle nutri-tion is minuscule.

The resting coronary blood flow in the human being averages about 225 ml/min, which is about 4 to 5 per cent of the total cardiac output.

During strenuous exercise, the heart in the young adult increases its cardiac output fourfold to seven-fold, and it pumps this blood against a higher than normal arterial pressure. Consequently, the work 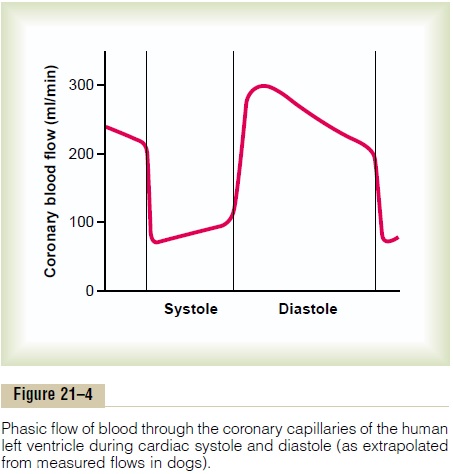 Phasic Changes in Coronary Blood Flow During Systole and Diastole—Effect of Cardiac Muscle Compression. Figure 21–4 shows the changes in blood flow through thenutrient capillaries of the left ventricular coronarysystem in milliliters per minute in the human heart during systole and diastole, as extrapolated from experiments in lower animals. Note from this diagram that the coronary capillary blood flow in the left ven-tricle muscle falls to a low value during systole, which is opposite to flow in vascular beds elsewhere in the body. The reason for this is strong compression of the left ventricular muscle around the intramuscular vessels during systolic contraction.

During diastole, the cardiac muscle relaxes and no longer obstructs blood flow through the left ventricu-lar muscle capillaries, so that blood flows rapidly during all of diastole.

Epicardial Versus Subendocardial Coronary Blood Flow—Effect of Intramyocardial Pressure. Figure 21–5 demonstrates the special arrangement of the coronary vessels at dif- ferent depths in the heart muscle, showing on the outer surface epicardial coronary arteries that supply most of the muscle. Smaller, intramuscular arteries derived from the epicardial arteries penetrate the muscle, supplying the needed nutrients. Lying immediately beneath the endocardium is a plexus of subendocar- dial arteries. During systole, blood flow through the subendocardial plexus of the left ventricle, where the intramuscular coronary vessels are compressed greatly by ventricular muscle contraction, tends to be reduced. But the extra vessels of the subendocardial plexus nor- mally compensate for this. Later, we will see that this peculiar difference between blood flow in the epicardial and subendocardial arteries plays an important role in certain types of coronary ischemia. 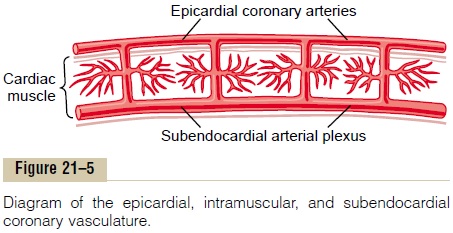 The distribution of parasympathetic (vagal) nerve fibers to the ventricular coronary system is not very great. However, the acetylcholine released by parasym-pathetic stimulation has a direct effect to dilate the coro-nary arteries.

There is much more extensive sympathetic innerva-tion of the coronary vessels. We see that the sympathetic transmitter substances norepineph-rine and epinephrine can have either vascular con-strictor or vascular dilator effects, depending on the presence or absence of constrictor or dilator receptors in the blood vessel walls. The constrictor receptors are called alpha receptors and the dilator receptors are calledbeta receptors. Both alpha and beta receptors exist in the coronary vessels. In general, the epicardial coronary vessels have a preponderance of alpha recep-tors, whereas the intramuscular arteries may have a preponderance of beta receptors. Therefore, sympa-thetic stimulation can, at least theoretically, cause slight overall coronary constriction or dilation, but usually constriction. In some people, the alpha vaso-constrictor effects seem to be disproportionately severe, and these people can have vasospastic myocar-dial ischemia during periods of excess sympathetic drive, often with resultant anginal pain.