Very strenuous exercise is one of the most stressful conditions that the normal circulatory system faces.

Very strenuous exercise is one of the most stressful conditions that the normal circulatory system faces. This is true because there is such a large mass of skele-tal muscle in the body, all of it requiring large amounts of blood flow. Also, the cardiac output often must increase in the non-athlete to four to five times normal, or in the well-trained athlete to six to seven times normal.

Rate of Blood Flow Through the Muscles

During rest, blood flow through skeletal muscle averages 3 to 4 ml/min/100 g ofmuscle. During extreme exercise in the well-conditioned athlete, this can increase 15- to 25-fold, rising to 50 to 80 ml/min/100 g of muscle.

Blood Flow During Muscle Contractions. Figure 21–1 shows a record of blood flowchanges in a calf muscle of a human leg during strong rhythmical muscular exer-cise. Note that the flow increases and decreases with each muscle contraction. At the end of the contractions, the blood flow remains very high for a few seconds but then fades toward normal during the next few minutes. 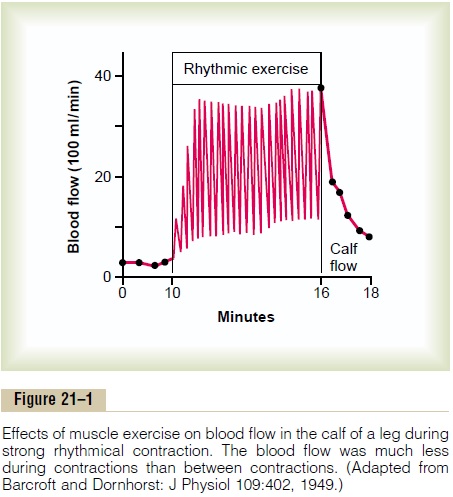 Control of Blood Flow Through the Skeletal Muscles

Local Regulation—Decreased Oxygen in Muscle Greatly Enhances Flow. The tremendous increase in muscleblood flow that occurs during skeletal muscle activity is caused primarily by chemical effects acting directly on the muscle arterioles to cause dilation. One of the most important chemical effects is reduction of oxygen in the muscle tissues. That is, during muscle activity, the muscle uses oxygen rapidly, thereby decreasing the oxygen concentration in the tissue fluids. This in turn causes local arteriolar vasodilation both because the arteriolar walls cannot maintain contraction in the absence of oxygen and because oxygen deficiency causes release of vasodilator substances. The most important vasodilator substance is probably adeno-sine, but experiments have shown that even large amounts of adenosine infused directly into a muscle artery cannot sustain vasodilation in skeletal muscle for more than about 2 hours.

Fortunately, even after the muscle blood vessels have become insensitive to the vasodilator effects of adenosine, still other vasodilator factors continue to maintain increased capillary blood flow as long as the exercise continues. These factors include (1) potassium ions, (2) adenosine triphosphate (ATP), (3) lactic acid, and (4) carbon dioxide. We still do not know quanti-tatively how great a role each of these plays in in-creasing muscle blood flow during muscle activity;

Sympathetic Vasoconstrictor Nerves. The sympa-thetic vasoconstrictor nerve fibers secrete norepineph-rine at their nerve endings. When maximally activated,this can decrease blood flow through resting muscles to as little as one half to one third normal. This vaso-constriction is of physiologic importance in circulatory shock and during other periods of stress when it is necessary to maintain a normal or even high arterial pressure.

Three major effects occur during exercise that are essential for the circulatory system to supply the tremendous blood flow required by the muscles. They are (1) mass discharge of the sympathetic nervous system throughout the body with consequent stimula-tory effects on the entire circulation, (2) increase in arterial pressure, and (3) increase in cardiac output.

At the onset of exercise, signals are transmitted not only from the brain to the muscles to cause muscle contraction but also into the vasomotor center to ini-tiate mass sympathetic discharge throughout the body. Simultaneously, the parasympathetic signals to the heart are attenuated. Therefore, three major circula-tory effects result.

First, the heart is stimulated to greatly increasedheart rate and increased pumping strength as a result of the sympathetic drive to the heart plus release of the heart from normal parasympathetic inhibition.

Second, most of the arterioles of the peripheral circulation are strongly contracted, except for thearterioles in the active muscles, which are strongly vasodilated by the local vasodilator effects in the muscles as noted above. Thus, the heart is stimulated to supply the increased blood flow required by the muscles, while at the same time blood flow through most nonmuscular areas of the body is temporarily reduced, thereby temporarily “lending” their blood supply to the muscles. This accounts for as much as 2 L/min of extra blood flow to the muscles, which is exceedingly important when one thinks of a person running for his life—even a fractional increase in running speed may make the difference between life and death. Two of the peripheral circulatory systems, the coronary and cerebral systems, are spared this vaso-constrictor effect because both these circulatory areashave poor vasoconstrictor innervation—fortunately so because both the heart and the brain are as essential to exercise as are the skeletal muscles.

Third, the muscle walls of the veins and other capac-itative areas of the circulation are contracted power-fully, which greatly increases the mean systemic filling pressure. As we learned, this is one ofthe most important factors in promoting increase in venous return of blood to the heart and, therefore, in increasing the cardiac output.

One of the most important effects of increased sym-pathetic stimulation in exercise is to increase the arte-rial pressure. This results from multiple stimulatory effects, including (1) vasoconstriction of the arterioles and small arteries in most tissues of the body except the active muscles, (2) increased pumping activity by the heart, and (3) a great increase in mean systemic filling pressure caused mainly by venous contraction. These effects, working together, virtually always increase the arterial pressure during exercise. This increase can be as little as 20 mm Hg or as great as 80 mm Hg, depending on the conditions under which the exercise is performed. When a person performs exercise under tense conditions but uses only a few muscles, the sympathetic nervous response still occurs everywhere in the body. In the few active muscles, vasodilation occurs, but everywhere else in the body the effect is mainly vasoconstriction, often increasing the mean arterial pressure to as high as 170 mm Hg. Such a condition might occur in a person standing on a ladder and nailing with a hammer on the ceiling above. The tenseness of the situation is obvious.

Conversely, when a person performs massive whole-body exercise, such as running or swimming, the increase in arterial pressure is often only 20 to 40 mm Hg. This lack of a large increase in pressure results from the extreme vasodilation that occurs simultaneously in large masses of active muscle.

Why Is the Arterial Pressure Increase During Exercise Impor-tant? When muscles are stimulated maximally in a lab-oratory experiment but without allowing the arterial pressure to rise, muscle blood flow seldom rises more than about eightfold. Yet, we know from studies of marathon runners that muscle blood flow can increase from as little as 1 L/min for the whole body during rest to at least 20 L/min during maximal activity. Therefore, it is clear that muscle blood flow can increase much more than occurs in the aforementioned simple labo-ratory experiment. What is the difference? Mainly, thearterial pressure rises during normal exercise.

Let us assume, for instance, that the arterial pressure rises 30 per cent, a common increase during heavy exercise. This 30 per cent increase causes 30 per cent more force to push blood through the muscle tissue vessels. But this is not the only important effect; the extra pressure also stretches the walls of the vessels so much that muscle total flow often rises to more than 20 times normal.

Importance of the Increase in Cardiac Output During Exercise

Many different physiologic effects occur at the same time during exercise to increase cardiac output approximately in proportion to the degree of exercise. In fact, the ability of the circulatory system to provide increased cardiac output for delivery of oxygen and other nutrients to the muscles during exercise is equally as important as the strength of the muscles themselves in setting the limit for continued muscle work. For instance, marathon runners who can increase their cardiac outputs the most are generally the same persons who have record-breaking running times. 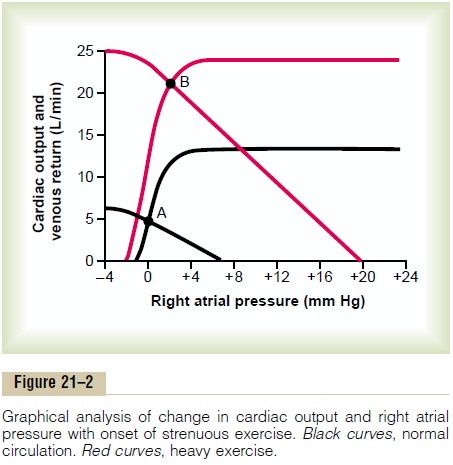 The increased level of the cardiac output curve is easy to understand. It results almost entirely from sympathetic stimulation of the heart that causes (1) increased heart rate, often up to rates as high as 170 to 190 beats/min, and (2) increased strength of contrac-tion of the heart, often to as much as twice normal. Without this increased level of the output curve, the increase in cardiac output would be limited to the plateau level of the normal heart, which would be a maximum increase of cardiac output of only about 2.5-fold rather than the 4-fold that can commonly be achieved by the untrained runner and the 7-fold that can be achieved in some marathon runners.

1.The mean systemic filling pressure rises tremendously at the onset of heavy exercise. This results partly from the sympathetic stimulationthat contracts the veins and other capacitative parts of the circulation. In addition, tensing of theabdominal and other skeletal muscles of the body compresses many of the internal vessels, thus providing more compression of the entire capacitative vascular system, causing a still greater increase in mean systemic filling pressure.

During maximal exercise, these two effects together can increase the mean systemic filling pressure from a normal level of 7 mm Hg to as high as 30 mm Hg.