1 Data-Flow Values for the Constant-Propagation Frame-work

2 The Meet for the Constant-Propagation Framework

3 Transfer Functions for the Constant-Propagation Frame-work

4 Monotonicity of the Constant-Propagation Framework

6 Interpretation of the Results

All the data-flow schemas discussed in Section 9.2 are actually simple examples of distributive frameworks with finite height. Thus, the iterative Algorithm 9.25 applies to them in either its forward or backward version and produces the MOP solution in each case. In this section, we shall examine in detail a useful data-flow framework with more interesting properties.

Recall that constant propagation, or "constant folding," replaces expressions that evaluate to the same constant every time they are executed, by that con-stant. The constant-propagation framework described below is different from all the data-flow problems discussed so far, in that

it has an unbounded set of possible data-flow values, even for a fixed flow graph, and it is not distributive.

Constant propagation is a forward data-flow problem. The semilattice rep-resenting the data-flow values and the family of transfer functions are presented next.

1. Data-Flow Values for the Constant-Propagation Framework

The set of data-flow values is a product lattice, with one component for each variable in a program. The lattice for a single variable consists of the following:

1. All constants appropriate for the type of the variable.

The value N A C , which stands for not-a-constant. A variable is mapped to this value if it is determined not to have a constant value. The variable may have been assigned an input value, or derived from a variable that is not a constant, or assigned different constants along different paths that lead to the same program point.

3. The value U N D E F , which stands for undefined. A variable is assigned this value if nothing may yet be asserted; presumably, no definition of the variable has been discovered to reach the point in question.

The semilattice for a typical integer-valued variable is shown in Fig. 9.25.

As discussed in Section 9.3.1, the meet of two values is their greatest lower bound. Thus, for all values v,

A data-flow value for this framework is a map from each variable in the program to one of the values in the constant semilattice. The value of a variable v in a map m is denoted by m(v).

2. The Meet for the Constant-Propagation Framework

3. Transfer Functions for the Constant-Propagation Framework

We assume in the following that a basic block contains only one statement. Transfer functions for basic blocks containing several statements can be con-structed by composing the functions corresponding to individual statements.

The set F consists of certain transfer functions that accept a map of variables to values in the constant lattice and return another such map .

F contains the identity function,  which takes a map as input and returns the same map as output.  F also contains the constant transfer function for the E N T R Y  node. This transfer function, given any input map, returns a map mo, where mo(v) = U N D E F ,  for all variables v.  This boundary condition makes sense, because before executing any program statements there are no definitions for any variables.

In general, let fs    be the transfer function of statement s, and let m and m' represent data-flow values such that m' = f(m). We shall describe /s    in terms of the relationship between m and m'.

1. If s is not an assignment statement, then fs   is simply the identity function.

As usual, + represents a generic operator, not necessarily addition.

4. Monotonicity of the Constant-Propagation Framework

Let us show that the constant propagation framework is monotone. First, we can consider the effect of a function fs on a single variable. In all but case 2(b), f8 either does not change the value of m(x), or it changes the map to return a constant or N A C . In these cases, /s must surely be monotone.

For case 2(b), the effect of fs is tabulated in Fig 9.26. The first and second columns represent the possible input values of y and z1 the last represents the output value of x. The values are ordered from the greatest to the smallest in each column or sub column. To show that the function is monotone, we check that for each possible input value of y, the value of x does not get bigger as the value of z gets smaller. For example, in the case where y has a constant value ci, as the value of z varies from U N D E F to c 2 to N A C , the value of x varies from U N D E F , to ci + c 2 , and then to N A C , respectively. We can repeat this procedure for all the possible values of y. Because of symmetry, we do not even need to repeat the procedure for the second operand before we conclude that the output value cannot get larger as the input gets smaller. 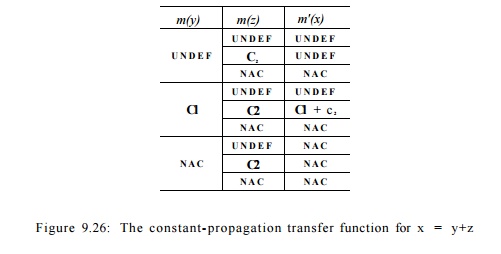 The constant-propagation framework as defined is monotone but not distribu-tive. That is, the iterative solution MFP is safe but may be smaller than the MOP solution. An example will prove that the framework is not distributive.

Example 9 . 2 6 : In the program in Fig. 9.27, x and y are set to 2 and 3 in block Bi, and to 3 and 2, respectively, in block B2.  We know that regardless of which path is taken, the value of z at the end of block B3 is 5.  The iterative algorithm does not discover this fact, however.  Rather, it applies the meet operator at the entry of B3, getting as the values of x and y. Since adding two 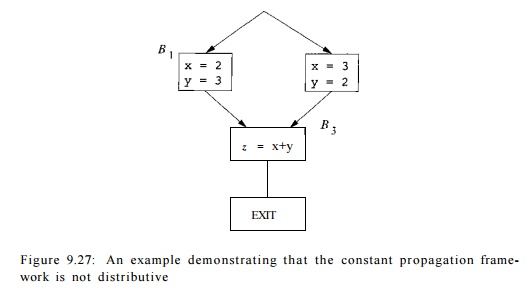 Figure 9.27: An example demonstrating that the constant propagation frame-work is not distributive

because it does not keep track of the correlation that whenever x is 2, y is 3,

and vice versa. It is possible, but significantly more expensive, to use a more complex framework that tracks all the possible equalities that hold among pairs of expressions involving the variables in the program; this approach is discussed in Exercise 9.4.2.

Theoretically, we can attribute this loss of precision to the nondistributivity of the  constant  propagation  framework. Let  f1 ,  f2,  and  fa  be  the  transfer functions representing blocks B1, B2 and B3, respectively. As shown in Fig 9.28, 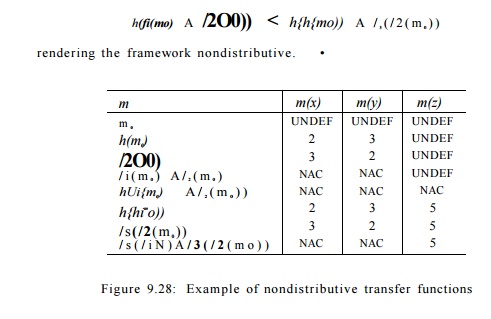 6. Interpretation of the Results

The value U N D E F is used in the iterative algorithm for two purposes: to initialize the E N T R Y node and to initialize the interior points of the program before the iterations. The meaning is slightly different in the two cases. The first says that variables are undefined at the beginning of the program execution; the second says that for lack of information at the beginning of the iterative process, we approximate  the  solution  with the top element UNDEF .    At the  end of the iterative process, the variables at the exit of the ENTRY  node will still hold the U N D E F  value, since OUT [ ENTRY ] never changes.

It  is possible that  U N D E F ' S may show up  at some other program points.

However, if it is impossible for predicate Q to be false while Q' is true, then this execution path never occurs. While the programmer may be aware of that fact, it may well be beyond the capability of any data-flow analysis to determine. Thus, if we assume that the program is correct and that all the variables are defined before they are used, it is indeed correct that the value of x at the beginning of basic block B5    can only be  10.  And if the program  is incorrect to begin with, then choosing 10 as the value of x cannot be worse than allowing x to assume some random value.

Exercise 9 . 4 . 1 :  Suppose we wish to detect all possibility of a variable being 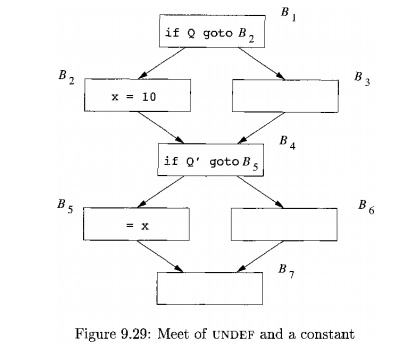 uninitialized along any path to a point where it is used. How would you modify the framework of this section to detect such situations?

Exercise 9 . 4 . 2 : An interesting and powerful data-flow-analysis framework is obtained by imagining the domain V to be all possible partitions of expressions, so that two expressions are in the same class if and only if they are certain to have the same value along any path to the point in question. To avoid having to list an infinity of expressions, we can represent V by listing only the minimal pairs of equivalent expressions. For example, if we execute the statements

a) What is the appropriate meet operator for this framework?

b) Give a data structure to represent domain values and an algorithm to implement the meet operator.

c) What are the appropriate functions to associate with statements? Explain the effect that a statement such as a = b+c should have on a partition of expressions (i.e., on a value in V).

d)  Is this framework monotone?  Distributive?