Based on the property of conductance of electricity, substances are classified into two types, namely, Conductors and Insulators (or) bad conductors of electricity.

Based on the property of conductance of electricity, substances are classified into two types, namely, Conductors and Insulators (or) bad conductors of electricity.

The electrons of different types of atoms have different degrees of freedom to move around. With some types of materials, such as metals, the outermost electrons in the atoms are loosely bound and they chaotically move in the space between the atoms of that material. Because these virtually unbound electrons are free to leave their respective atoms and float around in the space between adjacent atoms, they are often called as free electrons.

Let’s imagine that we have a metal in the form of a wire. When a voltage is connected across the ends of the metal wire, the free electrons drift in one direction.

So, a really good conductor is one that has lots of free charges while those who don’t have enough ‘free charges’ would not be good at conducting electricity or we can say that they would be ‘poor conductors’ of electricity.

Conductors are the materials whose atoms have electrons that are loosely bound and are free to move through the material. A material that is a good conductor gives very little resistance to the flow of charge (electron) on the application of external voltage. This flow of charge (electron) is what constitutes an electric current. A good conductor has high electrical conductivity in the above activity. 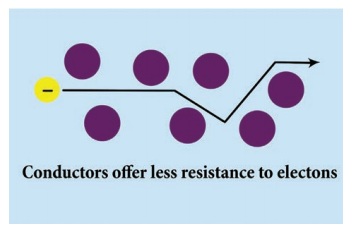 In general, more the free electrons, the better the material will conduct (for a certain applied voltage).

Those  materials which don’t have enough ‘free electrons’ are not good at conducting electricity or we can say that they would be ‘poor conductors’ of electricity and they are called insulators. 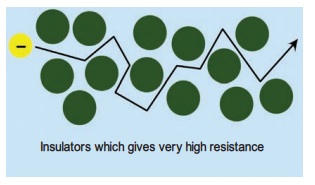 This is the material used in SIM Cards, Computers, and ATM cards. Do you know by which material I am made up off?

The chip  which are used in SIM Cards, Computers, and ATM cards are made up of semiconductors namely, silicon and germanium because of their electrical conductivity lies between a conductor and an insulator. 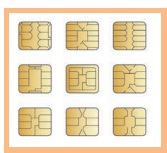 An insulator gives a lot of resistance to the flow of charge (electron). During the drift of the electrons in an object when an external voltage is applied, collisions occur between the free electrons and the atoms of the material also affect the movement of charges. These collisions mean that they get scattered. It is a combination of the number of free electrons and how much they are scattered that affects how well the metal conducts electricity. The rubber eraser does not allow electric current to pass through it. So rubber is a non-conductor of electricity. Rubber is an insulator

Wires made of copper, an nelectrical conductor, have very low resistance. Copper wires are used to carry current in households. These wires are in turn enclosed in electrical insulators, or materials of high electrical resistance. These materials are usually made of flexible plastic.