A cevian is a line segment that extends from one vertex of a triangle to the opposite side. In the diagram, AD is a cevian, from A.

A cevian is a line segment that extends from one vertex of a triangle to the opposite side. In the diagram, AD is a cevian, from A.

(i) A median is a cevian that divides the opposite side into two congruent(equal) lengths.

(ii) An altitude is a cevian that is perpendicular to the opposite side.

(ii) An angle bisector is a cevian that bisects the corresponding angle. 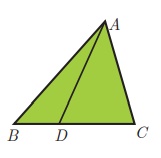 Let ABC be a triangle and let D,E,F be points on lines BC, CA,  AB respectively.  Then the cevians AD,  BE, CF are concurrent if and only if 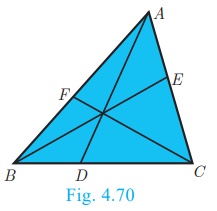 The cevians do not necessarily lie within the triangle, although they do in the diagram.

A necessary and sufficient condition for points P, Q, R on the respective sides BC, CA, AB (or their extension) of a triangle ABC to be collinear is that

where all segments in the formula are directed segments. 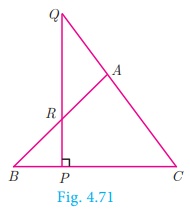 Example 4.32 Show that in a triangle, the medians are concurrent.

Medians are line segments joining each vertex to the midpoint of the corresponding opposite sides. 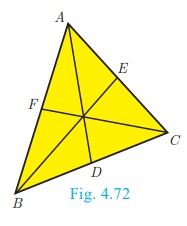 Thus medians are the cevians where D, E, F are midpoints of BC, CA and AB respectively.

And so, Ceva’s theorem is satisfied.

Hence the Medians are concurrent.

Consider DABC . Then D, E and F are respective points on the sides CA, AB and BC. By construction D, E, F are collinear. 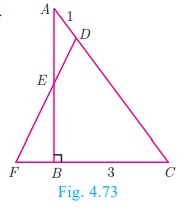 Using Ceva’s theorem, we have, 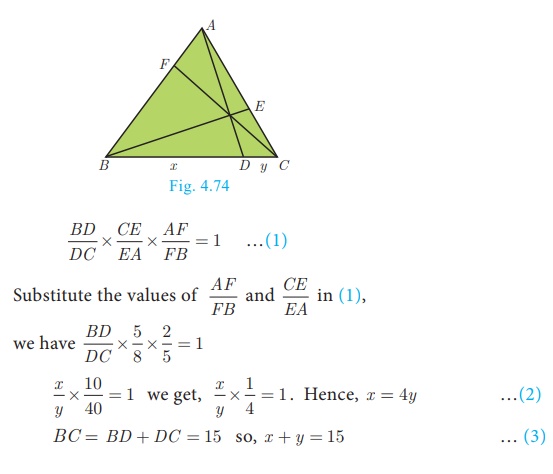 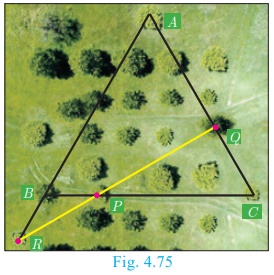 By Meanlau’s theorem, the trees P, Q, R will be collinear (lie on same straight line)