Components of the Circle System 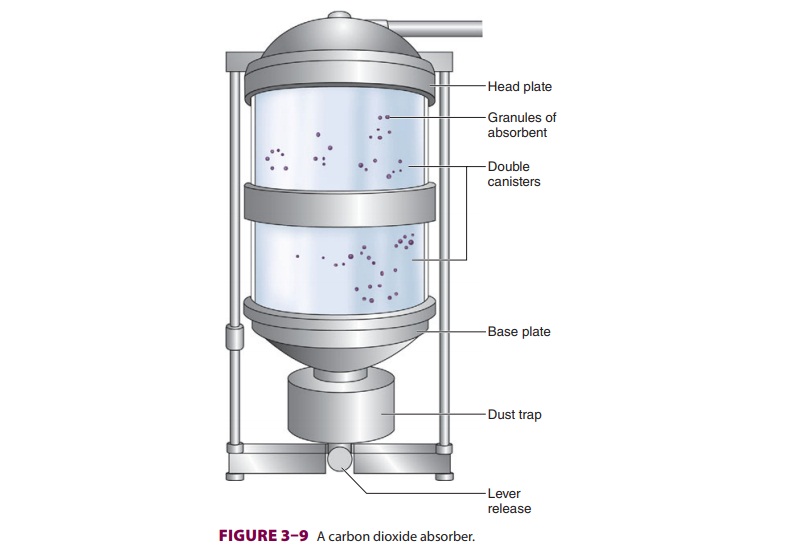 A. Carbon Dioxide Absorber and the Absorbent B. Unidirectional Valves

Components of the Circle System

A. Carbon Dioxide Absorber and the Absorbent

Rebreathing alveolar gas conserves heat and humid-ity. However, the CO2 in exhaled gas must be elimi-nated to prevent hypercapnia. CO 2 chemically 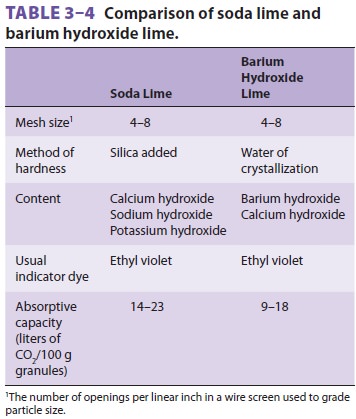 Note that the water and sodium hydroxide ini-tially required are regenerated. Another absorbent, barium hydroxide lime, is no longer used due to the possible increased hazard of fire in the breathing system. 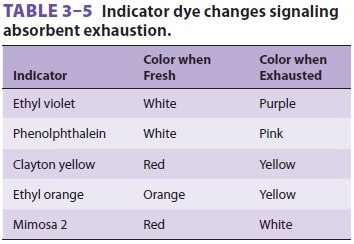 A pH indicator dye (eg, ethyl violet) changes color from white to purple as a consequence of increasing hydrogen ion concentration and absorbent exhaus-tion (Table 3–5). Absorbent should be replaced when 50% to 70% has changed color. Although exhausted granules may revert to their original color if rested, no significant recovery of absorptive capac-ity occurs. Granule size is a compromise between the higher absorptive surface area of small granules and the lower resistance to gas flow of larger granules. The granules commonly used as CO2 absorbent are between 4 and 8 mesh; the number of mesh corre-sponds to the number of holes per square inch of a screen. The hydroxide salts are irritating to the skin and mucous membranes. Increasing the hardness of soda lime by adding silica minimizes the risk of inha-lation of sodium hydroxide dust and also decreases resistance of gas flow. Additional water is added to absorbent during packaging to provide optimal con-ditions for carbonic acid formation. Commercial soda lime has a water content of 14% to 19%.

Absorbent granules can absorb and later release medically important amounts of volatile anesthetic. This property can be responsible for modest delays of induction or emergence. The drier the soda lime, the more likely it will absorb and degradevolatile anesthetics. Volatile anesthetics can be bro-ken down to carbon monoxide by dry absorbent (eg, sodium or potassium hydroxide) to such a degree that it is capable of causing clinically significant car-bon monoxide poisoning. The formation of carbon monoxide is highest with desflurane; with sevoflu-rane, it occurs at a higher temperature.Amsorb is a CO2 absorbent consisting of cal-cium hydroxide and calcium chloride (with calcium sulfate and polyvinylpyrrolidone added to increase hardness). It possesses greater inertness than soda lime, resulting in less degradation of volatile anes-thetics (eg, sevoflurane into compound A or desflu-rane into carbon monoxide).

Compound A is one of the by-products of deg-radation of sevoflurane by absorbent. Higher con-centrations of sevoflurane, prolonged exposure, and low-flow anesthetic technique seem to increase the formation of Compound A. Compound A has been shown to produce nephrotoxicity in animals,

The granules of absorbent are contained within one or two canisters that fit snugly between a head and base plate. Together, this unit is called an absorber (Figure 3–9). Although bulky, double 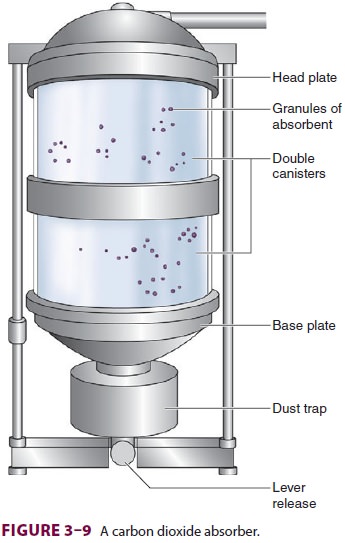 canisters permit more complete CO2 absorption, less frequent absorbent changes, and lower gas flow resistance. To ensure complete absorption, a patient’s tidal volume should not exceed the air space between absorbent granules, which is roughly equal to 50% of the absorber’s capacity. Indicator dye color is monitored through the absorber’s trans-parent walls. Absorbent exhaustion typically occurs first where exhaled gas enters the absorber and along the canister’s smooth inner walls. Channeling through areas of loosely packed granules is mini-mized by a baffle system, which directs gas flow through the center, thereby allowing greater utili-zation of the absorbent. A trap at the base of the absorber collects dust and moisture. Newer absorb-ers are used until CO 2 is found in the inhaled gas on the anesthetic-gas monitor, at which time the canister(s) are replaced.

Unidirectional valves, which function as check valves, contain a ceramic or mica disk resting hori-zontally on an annular valve seat ( Figure 3–10). Forward flow displaces the disk upward, permitting the gas to proceed through the circuit. Reverse flow pushes the disk against its seat, preventing reflux. Valve incompetence is usually due to a warped disk or seat irregularities. The expiratory valve is exposed to the humidity of alveolar gas. Condensation and resultant moisture formation may prevent upward 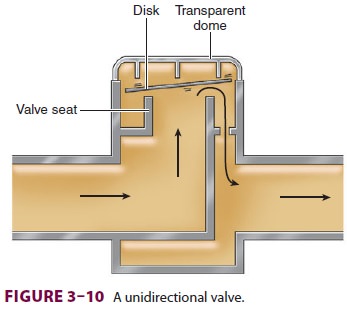