A window will have a frame or border, usually rectangular in shape, to define its boundaries and distinguish it from other windows.

While a border need not be rectangular, this shape is a preferred shape for most people.

The title bar is the top edge of the window, inside its border and extending its entire width.

This title bar is also referred to by some platforms as the caption, caption bar, or title area.

The title bar contains a descriptive title identifying the purpose or content of the window.

Located at the left corner of the title bar in a primary window, this button is used in Windows to retrieve a pull-down menu of commands that apply to the object in the window.

It is 16 X 16 version of the icon of the object being viewed.

Located at the right corner of the title bar, these buttons are used to manipulate the size of a window.

The leftmost button, the minimize button— inscribed with a short horizontal line toward the bottom of the button—is used to reduce a window to its minimum size, usually an icon. It also hides all associated windows.

The maximize button—typically inscribed with a large box—enlarges a window to its maximum size, usually the entire screen. When a screen is maximized, the restore button replaces the maximize button, since the window can no longer be increased in size.

When these buttons are displayed, use the following guidelines:

When a window does not support a command, do not display its command button.

The Close button always appears as the rightmost button. Leave a gap between it and any other buttons.

The Restore button always replaces the Maximize button or the Minimize button when that command is carried out.

Windows command to provide contextual Help about objects displayed within a secondary window.

A menu bar is used to organize and provide access to actions. It is located horizontally at the top of the window, just below the title bar.

A menu bar contains a list of topics or items that, when selected, are displayed on a pull-down menu beneath the choice.

Information of use to the user can be displayed in a designated screen area or areas. They may be located at the top of the screen in some platforms and called a status area, or at the screen’s bottom.

Microsoft recommends the bottom location and refers to this area as the status bar. It is also referred to by other platforms as a message area or message bar.

When all display information cannot be presented in a window, the additional information must be found and made visible.

This is accomplished by scrolling the display’s contents through use of a scroll bar.

A scroll bar is an elongated rectangular container consisting of a scroll area or shaft, a slider box or elevator, and arrows or anchors at each end.

For vertical scrolling, the scroll bar is positioned at the far right side of the work

A window can be split into two or more pieces or panes by manipulating a split box located above a vertical scroll bar or to the left of a horizontal scroll bar.

A split box is sometimes referred to as a split bar.

Toolbars are permanently displayed panels or arrays of choices or commands that must be accessed quickly. They are sometimes called command bars.

Toolbars are designed to provide quick access to specific commands or options. Specialized toolbars are sometimes referred to as ribbons, toolboxes, rulers, or palettes.

In situations where it is useful for a command to be typed into a screen, a command area can be provided.

The desired location of the command area is at the bottom of the window.

A size grip is a Microsoft Windows special handle included in a window to permit it to be resized.

When the grip is dragged the window resizes, following the same conventions as the sizing border. Three angled parallel lines in the lower-right corner of a window designate the size grip.

The work area is the portion of the screen where the user performs tasks.

It is the open area inside the window’s border and contains relevant peripheral screen components such as the menu bar, scroll bars, or message bars.

The work area may also be referred to as the client area. 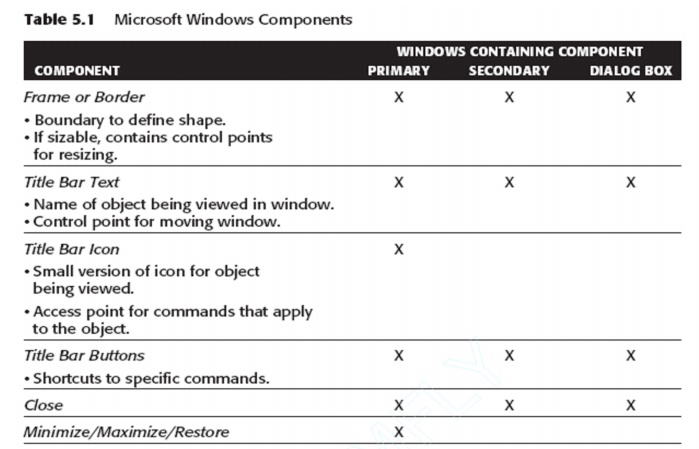 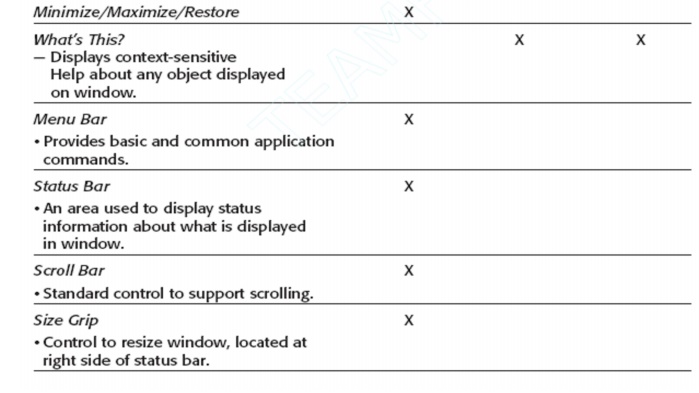