Drug clearance principles are similar to the clearance concepts of renal physiology.

Drug clearance principles are similar to the clearance concepts of renal physiology. Clearance of a drug is the factor that predicts the rate of elimination in relation to the drug concentration:

Clearance, like volume of distribution, may be defined with respect to blood (CLb), plasma (CLp), or unbound in water (CLu), depending on the concentration measured.

It is important to note the additive character of clearance. Elimination of drug from the body may involve processes occur-ring in the kidney, the lung, the liver, and other organs. Dividing the rate of elimination at each organ by the concentration of drug presented to it yields the respective clearance at that organ. 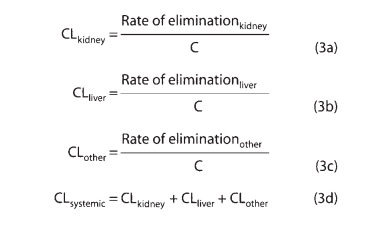 This is usually referred to as first-order elimination. When clearance is first-order, it can be estimated by calculating the areaunder the curve (AUC) of the time-concentration profile after adose. Clearance is calculated from the dose divided by the AUC.

Most drug elimination pathways will become saturated if the dose and therefore the concentration are high enough. When blood flow to an organ does not limit elimination , the relation between elimination rate and concentration (C) is expressed mathematically in equation (5): 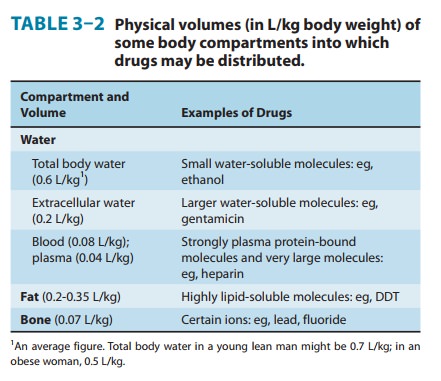 In contrast to capacity-limited drug elimination, some drugs are cleared very readily by the organ of elimination, so that at any clinically realistic concentration of the drug, most of the drug in the blood perfusing the organ is eliminated on the first pass of the drug through it. The elimination of these drugs will thus depend primarily on the rate of drug delivery to the organ of elimination. Such drugs (see Table 4–7) can be called “high-extraction” drugs since they are almost completely extracted from the blood by the organ. Blood flow to the organ is the main determinant of drug delivery, but plasma protein binding and blood cell partitioning may also be important for extensively bound drugs that are highly extracted.