C. psittaci is the causative agent of psittacosis, a disease ofparrots and psittacine birds which can be transmitted to humans.

Infection in birds may occur as asymptomatic or symp-tomatic. Symptomatic infection may manifest as respiratory infection, diarrhea, and emaciation. In the infected birds, the bacteria are present in the blood, tissue, and feathers and are also excreted in the feces, nasal discharges, aerosols, etc.

C. psittaci can be transmitted from birds to humans as wellas sheep, cows, and goat. Humans acquire the infection mostly from psittacine birds, such as parrots, parakeets, cockatiels, and macaws. They get infected by inhalation of dried bird drop-pings, urine, or respiratory secretions of these infected birds.

Human infections are mostly occupational, and veteri-narians, poultry workers, pet-shop workers, pigeon farmers, etc. are at increased risk for this infection. Person-to-person transmission is rare. Ingestion of poultry birds also does not cause any infection. Laboratory infection is well documented.

C. psittaci in humans causes a clinical syndrome, which var-ies from a mild influenza-like illness to a fatal pneumonia. Incubation period varies from 5 to 14 days. Headache, high fever, chills, malaise, and myalgia are the symptoms at the initial stage of the illness. Nonproductive cough, rales, and con-solidation are the respiratory manifestations. The untreated cases may be severe and progress to encephalitis, endocarditis, pericarditis, and even death (Fig. 49-2). 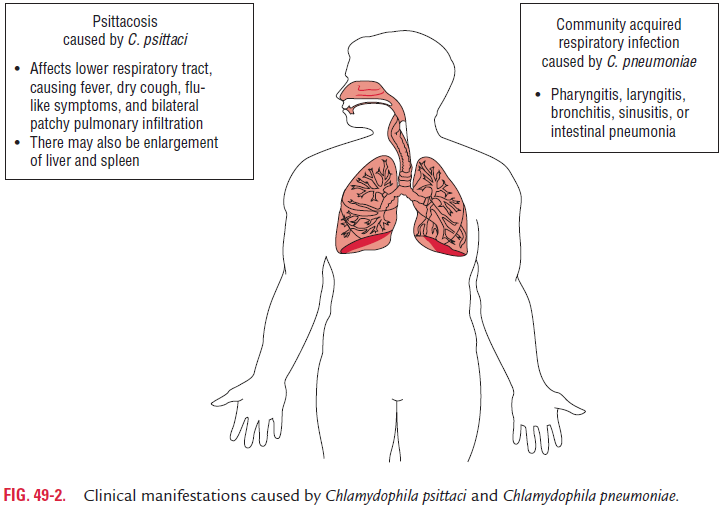 Laboratory diagnosis of the condition is based mainly on the serological tests. Demonstration of a fourfold rise in antibody titer in the paired acute and convalescent sera by the CFT is suggestive of C. psittaci infection. MIF test is a specific test used to confirm the diagnosis.

Levinthal-Cole-Lille (LCL) inclusion bodies:These are demon-strated in mouse brain, yolk sac, cell cultures, and in infected cells including alveolar macrophages from patients suffering from C. psittaci infection. These inclusion bodies are not stained by iodine, and are more diffuse and irregular. They are not inhibited by sulfadiazine or cycloserine. C. psittaci can be grown in cell cultures, such as L cells after 5–10 days of incubation, but is not used routinely.

Tetracycline, doxycycline, erythromycin, and azithromy-cin are useful for treatment of C. psittaci infection. Infection is prevented by controlling it in birds.