Chlamydiae are obligate intracellular parasites of humans and animals with marked affinity for the squamous epithelial cells of the gastrointestinal and respiratory tracts.

Chlamydiae are obligate intracellular parasites of humans and animals with marked affinity for the squamous epithelial cells of the gastrointestinal and respiratory tracts. Species causing human infections are summarized in Table 49-1. 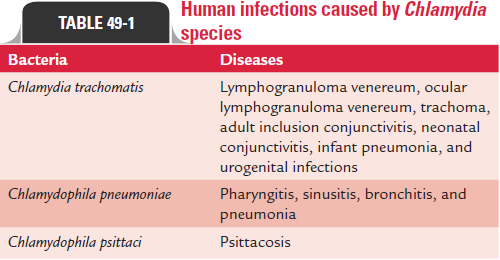 The chlamydiae were once considered viruses due to their filterability through 0.45 mm filter and due to their failure to grow in cell-free media. Earlier they were namedPsittacosislymphogranuloma trachoma (PLT) viruses or PLT agents. However,the Chlamydia shows the following properties of bacteria by which they differ from viruses:

2.        They possess cell wall as that of Gram-negative bacteria.

5.        They produce and synthesize their own nucleic acid, lipids, and proteins.

6.        They are susceptible to a wide range of antibiotics, such as tetracyclines, erythromycin, macrolides, and rifampicin.

Elementary body: The elementary body (EB) is a small,extracellular, infective form. It is a round particle measuring 300–400 nm in size. The cell wall possesses a rigid trilaminar structure as seen in the cell walls of Gram-negative bacteria. These bacteria lack peptidoglycan layer found in other bacteria. However, their outer membrane proteins due to the presence of extensive cross-linked protein of the outer membrane confer rigidity to the cell wall. The chlamydiae do not multiply in the EB form, but are infectious. They cause infections by binding to receptors on the epithelial cells and stimulate uptake of the bacteria by infiltration.

A genus-specific lipopolysaccharide (LPS) is present in the cell wall of Chlamydia. This LPS can be detected by a comple-ment fixation test (CFT) and species-specific and strain-specific outer membrane protein.