Elementary body: The elementary body (EB) is a small,extracellular, infective form. It is a round particle measuring 300–400 nm in size. The cell wall possesses a rigid trilaminar structure as seen in the cell walls of Gram-negative bacteria. These bacteria lack peptidoglycan layer found in other bacteria. However, their outer membrane proteins due to the presence of extensive cross-linked protein of the outer membrane confer rigidity to the cell wall. The chlamydiae do not multiply in the EB form, but are infectious. They cause infections by binding to receptors on the epithelial cells and stimulate uptake of the bacteria by infiltration.

A genus-specific lipopolysaccharide (LPS) is present in the cell wall of Chlamydia. This LPS can be detected by a comple-ment fixation test (CFT) and species-specific and strain-specific outer membrane protein.

The Chlamydia multiplies by a characteristic growth cycle that takes place within susceptible host cells (Fig. 49-1). Elementary bodies are the infective form, which initiate the cycle. The infec-tion is initiated by the attachment of the EB to the microvilli of susceptible epithelial cells followed by penetration into the host cell. Inside the host cells, EB remains within the cytoplas-mic phagosomes in which EBs begin to multiply. The fusion of EB containing phagosome with cell wall lysosome is prevented; thus intracellular killing of EB is inhibited. This phagolyso-somal fusion is usually prevented in the host cells with the intact outer membrane. 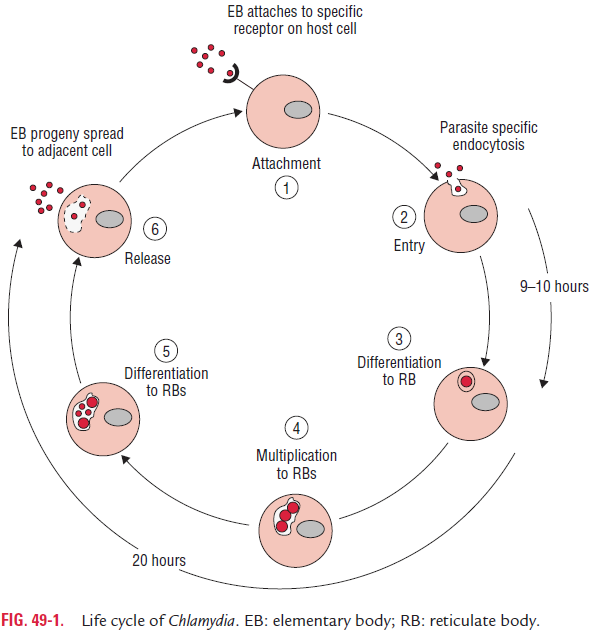 Within 6–8 hours after entering the cell, the EBs within the phagosome are transformed to large, metabolically active RBs. These RBs synthesize their own proteins and nucleic acids but lack the ability to produce their own high-energy phosphate compound. The chlamydiae are called energy par-asites because of this deficiency. Some strains of Chlamydia also depend on the host for the requirement of their amino acid.

The RBs multiply by binary fission, which continues for next 18–24 hours. The developing phagosome with accumulated reticulated bodies within the host cell is called the inclusion body. The mature inclusion body contains nearly 100–500 EBs, which can be readily demonstrated by various staining proce-dures. Ultimately, the host cell ruptures, releasing the EBs.

Chlamydiae during the active growth express the Chlamydia-specific LPSs on the cell surface of the infected host cell. These LPSs expressed on the outer surface of the cell are highly anti-genic and induce immunological and inflammatory responses.

The properties that differentiate the three Chlamydia spe-cies are summarized in Table 49-2. These species differ in their (a) growth characteristics, (b) antigens, (c) nucleic acid profile, (d) plasmids, and (e) nature of the inclusion body.