Thiols can be prepared by the reaction of an alkyl halide with KOH and an excess of hydrogen sulfide.

Hydrogen bonding is weak, resulting in boiling points which are lower than comparable alcohols and similar to comparable thioethers.

Thiols are oxidized by bromine or iodine to give disulfides. Treatment of a thiol with a base results in the formation of a thiolate ion.

The problem of thioether formation can also be avoided by using an alternative procedure involving thiourea (Fig. 1b). The thiourea acts as the nucleophile in an SN2 reaction to produce an S-alkylisothiouronium salt which is then hydrolyzed with aqueous base to give the thiol.

Thiols can also be formed by reducing disulfides with zinc in the presence of acid (Fig. 1c).

Thiols form extremely weak hydrogen bonds – much weaker than alcohols – and so thiols have boiling points which are similar to comparable thioethers and which are lower than comparable alcohols. For example, ethanethiol boils at 37°C whereas ethanol boils at 78°C.

Low molecular weight thiols are notorious for having disagreeable aromas.

Thiols are easily oxidized by mild oxidizing agents such as bromine or iodine to give disulfides (Fig. 2).

Thiols react with base to form thiolate ions which can act as powerful nucleo- philes. 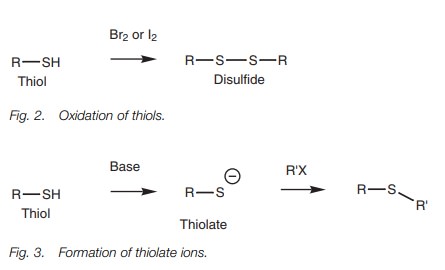