Alcohols are weak acids and react with strong bases to form an alkoxide ion.

Alcohols are weak acids and react with strong bases to form an alkoxide ion.

Tertiary alcohols and some secondary alcohols are converted to alkyl chlo-rides and alkyl bromides on treatment with HCl and HBr respectively. The mechanism involves protonation of the hydroxyl group to turn it into a good leaving group, then a normal SN1 reaction. Primary and secondary alcohols are converted to alkyl chlorides and alkyl bromides by an SN2 reac-tion involving thionyl chloride and phosphorus tribromide respectively. The reagents serve to convert the hydroxyl group into a better leaving group and also act as a source of the halide ion.

Alcohols can be converted to esters by reaction with carboxylic acids, acid chlorides or acid anhydrides.

Alcohols are slightly weaker acids than water which means that the conjugate base generated from an alcohol (the alkoxide ion) is a stronger base than the con- jugate base of water (the hydroxide ion). As a result, it is not possible to generate an alkoxide ion using sodium hydroxide as base. Alcohols do not react with sodium bicarbonate or amines, and a stronger base such as sodium hydride or sodium amide is required to generate the alkoxide ion (Fig. 1). Alcohols can also be converted to alkoxide ions on treatment with potassium, sodium, or lithium metal. Some organic reagents can also act as strong bases, for example Grignard reagents and organolithium reagents.

Alkoxide ions are neutralized in water and so reactions involving these reagents should be carried out in the alcohol from which they were derived, that is reac-tions involving sodium ethoxide are best carried out in ethanol. Alcohols have a typical pKa of 15.5–18.0 compared to pKa values of 25 for ethyne, 38 for ammonia and 50 for ethane.

Alcohols, like alkyl halides, can undergo elimination reactions to form alkenes. Since water is eliminated, the reaction is also known as a dehydration. 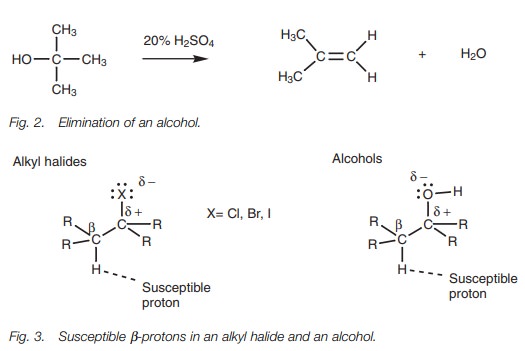 Like alkyl halides, the elimination reaction of an alcohol requires the presence of a susceptible proton at the β-position (Fig. 3).

Elimination under acidic conditions is more successful since the hydroxyl group is first protonated and then departs the molecule as a neutral water molecule (dehydration) which is a much better leaving group. If different isomeric alkenes are possible, the most substituted alkene will be favored – another example of Zaitsev’s rule (Fig. 4). The reaction works best with tertiary alcohols since the elimination proceeds by the E1 mechanism.

The E1 reaction is not ideal for the dehydration of primary or secondary alco-hols since vigorous heating is required to force the reaction and this can result in rearrangement reactions.

Therefore, alternative methods are useful. Reagents such as phosphorus oxychloride (POCl3) dehydrate secondary and tertiary alcohols under mild basic conditions using pyridine as solvent (Fig. 6). The phosphorus oxychloride serves to activate the alcohol, converting the hydroxyl function into a better leaving group. The mechanism involves the alcohol acting as a nucleophile in the first step. Oxygen uses a lone pair of electrons to form a bond to the elec-trophilic phosphorus of POCl3 and a chloride ion is lost (Step 1). Pyridine then removes a proton from the structure to form a dichlorophosphate intermediate (Step 2). The dichlorophosphate group is a much better leaving group than the hydroxide ion and so a normal E2 reaction can take place. Pyridine acts as a base to remove a β-proton and as this is happening, the electrons from the old C–H bond are used to form a π bond and eject the leaving group (Step 3).

Tertiary alcohols can undergo the SN1 reaction to produce tertiary alkyl halides. Since the reaction requires the loss of the hydroxide ion (a poor leaving group), a little bit of ‘trickery’ is required in order to convert the hydroxyl moiety into a better leaving group. This can be achieved under acidic conditions with the use of HCl or HBr. The acid serves to protonate the hydroxyl moiety as the first step and then a normal SN1 mechanism takes place where water is lost from the molecule to form an intermediate carbocation. A halide ion then forms a bond to the carbocation center in the third step.

The first two steps of this mechanism are exactly the same as the elimination reaction described above. Both reactions are carried out under acidic conditions and one might ask why elimination does not occur. The difference here is that halide ions serve as good nucleophiles and are present in high concentration. The elimination reaction described earlier is carried out using concentrated sulfuric acid and only weak nucleophiles are present (i.e. water) in low concentration. Having said that, some elimination can occur and although the reaction of alco-hols with HX produces mainly alkyl halide, some alkene by-product is usually present.

Since primary alcohols and some secondary alcohols do not undergo the SN1 reaction, nucleophilic substitution of these compounds must involve an SN2 mech-anism. Once again, protonation of the OH group is required as a first step, then the reaction involves simultaneous attack of the halide ion and loss of water. The reaction proceeds with good nucleophiles such as the iodide or bromide ion, but fails with the weaker nucleophilic chloride ion. In this case, a Lewis acid  needs to be added to the reaction mixture. The Lewis acid forms a complex with the oxygen of the alcohol group, resulting in a much better leaving group for the subsequent SN2 reaction.

Nevertheless, the reaction of primary and secondary alcohols with hydrogen halides can often be a problem since unwanted rearrangement reactions often take place.

To avoid this, alternative procedures carried out under milder basic condi-tions have been used with reagents such as thionyl chloride or phosphorus tribromide (Fig. 8). These reagents act as electrophiles and react with the alcoholic oxygen to form an intermediate where the OH moiety has been converted into a better leaving group. A halide ion is released from the reagent in this process, and this can act as the nucleophile in the subsequent SN2 reaction. 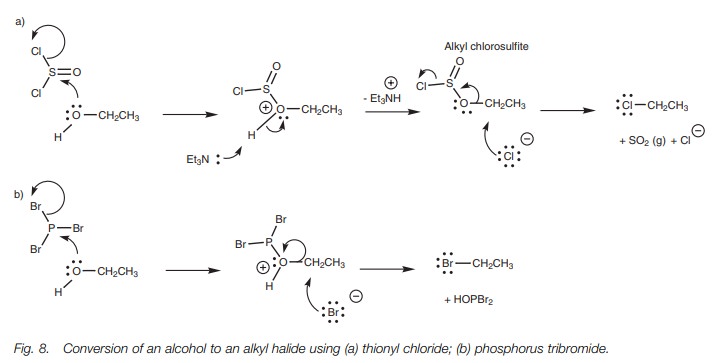 In the reaction with thionyl chloride, triethylamine is present to mop up the HCl formed during the reaction. The reaction is also helped by the fact that one of the products (SO2) is lost as a gas, thus driving the reaction to completion.

It is sometimes convenient to synthesize an activated alcohol which can be used in nucleophilic substitution reactions like an alkyl halide. Mesylates and tosylates are examples of sulfonate compounds which serve this purpose.

They are synthesized by treating alcohols with sulfonyl chlorides in the presence of a base such as pyridine or triethylamine (Fig. 9). The base serves to ‘mop up’ the HCl which is formed and prevents acid-catalyzed rearrangement reactions.

The mesylate and tosylate groups are excellent leaving groups and can be viewed as the equivalent of a halide. Therefore mesylates and tosylates can undergo the SN2 reaction in the same way as alkyl halides (Fig. 11).

The oxidation of alcohols is an extremely important reaction in organic synthesis. Primary alcohols can be oxidized to aldehydes, but the reaction is tricky since there is the danger of over-oxidation to carboxylic acids. With volatile aldehydes, the aldehydes can be distilled from the reaction solution as they are formed. However, this is not possible for less volatile aldehydes. This problem can be overcome by using a mild oxidizing agent called pyridinium chlorochromate (PCC; Fig. 12a). If a stronger oxidizing agent is used in aqueous conditions (e.g. CrO3  in aqueous sulfuric acid), primary alcohols are oxidized to carboxylic acids (Fig. 12b), while secondary alcohols are oxidized to ketones (Fig. 12c).

The mechanism of oxidation for a secondary alcohol with CrO3 (Fig. 14) involves the nucleophilic oxygen reacting with the oxidizing agent to produce a charged chromium intermediate. Elimination then occurs where anα-proton is lost along with the chromium moiety to produce the carbonyl group. The mecha-nism can be viewed as an E2 mechanism, the difference being that different bonds are being created and broken. Since the mechanism requires anα-proton to be removed from the alcoholic carbon, tertiary alcohols cannot be oxidized since they do not contain such a proton. The mechanism also explains why an aldehyde product is resistant to further oxidation when methylene chloride is the solvent (i.e. no OH present to react with the chromium reagent). When aqueous condi-tions are used the aldehyde is hydrated and this generates two OH groups which are available to bond to the chromium reagent and result in further oxidation.

Alcohols can be converted to esters by treatment with an acid chloride, acid anhydride or carboxylic acid.