Phenols are stronger acids than alcohols and are converted to phenoxide ions with sodium hydroxide.

Phenols are stronger acids than alcohols and are converted to phenoxide ions with sodium hydroxide. However, they are weaker acids than car-boxylic acids and do not react with sodium hydrogen carbonate. Electron-withdrawing substituents on the aromatic ring increase acidity whereas electron-donating groups decrease acidity. The position of substituents on the aromatic ring relative to the phenolic group is also important.

Phenols can be treated with acid chlorides or acid anhydrides to give esters. Treatment with sodium hydroxide then an alkyl halide leads to the forma-tion of aryl alkyl ethers. There are several reactions which are possible for alcohols but not for phenols. The synthesis of phenyl esters by reaction with a carboxylic acid under acid conditions is not possible. Reactions involving the cleavage of the aryl C–O bond are also not possible.

Phenols are powerful activating groups which direct electrophilic substitu-tion to the ortho and para positions. Sulfonation and nitration result in ortho and para products. Bromination, however, results in the introduction of three bromine substituents at the para and both ortho positions. The activat-ing power of the phenol group can be moderated by conversion to an ester such that bromination occurs only once and is directed para in preference to ortho.

Phenols are susceptible to oxidation to quinones.

Phenols can be converted to phenoxide ions then treated with an allyl bromide to form an allyl phenyl ether. On heating, these ethers undergo a concerted rearrangement reaction which results in the allyl group being transferred from the phenol group to the ortho carbon. The reaction is a use-ful method of obtaining ortho-alkyl phenols since the double bond can be subsequently hydrogenated.

Phenols are acidic since the oxygen’s lone pair of electrons can participate in a resonance mechanism involving the adjacent aromatic ring (Fig. 1). Three resonance structures are possible where the oxygen gains a positive charge and the ring gains a negative charge.

The net result is a slightly positive charge on the oxygen which accounts for the acidity of its proton. There are also three aromatic carbons with slightly negative charges. 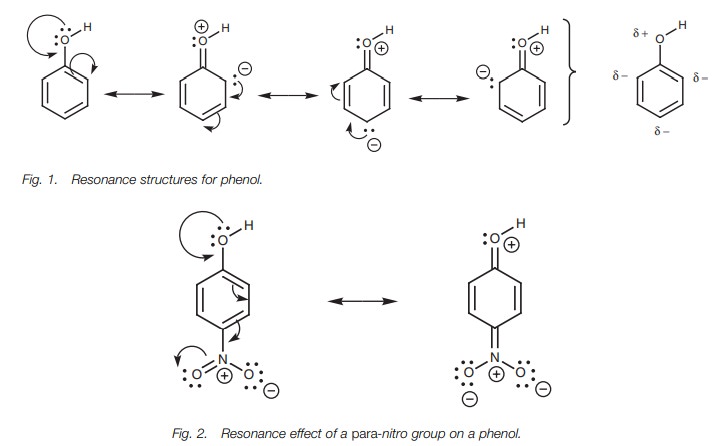 The type of substituents present on the aromatic ring can have a profound effect on the acidity of the phenol. This is because substituents can either stabilize or destabilize the partial negative charge on the ring. The better the partial charge is stabilized, the more effective the resonance will be and the more acidic the phenol will be. Electron-withdrawing groups such as a nitro substituent increase the acid-ity of the phenol since they stabilize the negative charge by an inductive effect. Nitro groups which are ortho or para to the phenolic group have an even greater effect. This is because a fourth resonance structure is possible which delocal-izes the partial charge even further (Fig. 2).

Electron-donating substituents (e.g. alkyl groups) have the opposite effect and decrease the acidity of phenols.

Phenols  can  be  converted  into  esters  by  reaction  with  acid  chlorides  or  acid anhydrides , and into ethers by reaction with alkyl halides in the presence of base. These reactions can be carried out under milder conditions than those used for alcohols due to the greater acidity of phenols. Thus phenols can be converted to phenoxide ions with sodium hydroxide rather than metallic sodium.

Although the above reactions are common to alcohols and phenols, there are several reactions which can be carried out on alcohols but not phenols, and viceversa. For example, unlike alcohols, phenols cannot be converted to esters by reac-tion with a carboxylic acid under acid catalysis. Reactions involving the cleavage of the C–O bond are also not possible for phenols. The aryl C–O bond is stronger than the alkyl C–O bond of an alcohol.

Electrophilic  substitution  is  promoted  by  the  phenol  group  which  acts  as  an activating group and directs substitution to the ortho and para positions. Sulfonation and nitration of phenols are both possible to give ortho and para sub-stitution products. On occasions, the phenolic groups may be too powerful an activating group and it is difficult to control the reaction to one substitution. For example, the bromination of phenol leads to 2,4,6-tribromophenol even in the absence of a Lewis acid (Fig. 4).

Phenols are susceptible to oxidation to quinones (Fig. 6).

A useful method of introducing an alkyl substituent to the ortho position of a phenol is by the Claisen rearrangement (Fig. 7). The phenol is converted to the phenoxide ion, then treated with 3-bromopropene (an allyl bromide) to form an ether. On heating, the allyl group (–CH2–CH=CH2) is transferred from the phe-nolic group to the ortho position of the aromatic ring. The mechanism involves a concerted process of bond formation and bond breaking called a pericyclic reac-tion (Fig. 8).

This results in a ketone structure which immediately tautomerizes tothe final product. Different allylic reagents could be used in the reaction and the double bond in the final product could be reduced to form an alkane substituent without affecting the aromatic ring.