Centrifugation is a process used to separate particles or concentratematerials such as cells, sub cellular organelles, viruses, proteins and nucleic acids suspended in a liquid medium.

In 1923 Theodor Svedberg and his student H. Rinde had successfully analyzed large-grained sols by use of centrifugation. Centrifugation is a process used to separate particles or concentratematerials such as cells, sub cellular organelles, viruses, proteins and nucleic acids suspended in a liquid medium. The object moving in circle at a steady angular velocity will experience a force F directed outwards; this is the basis of centrifugation. The centrifugal force generated by a centrifuge is determined by the speed of rotation and the distance of the sample from the axis of rotation. The centrifugal force is usually compared to the force of gravity and is reported as the relative centrifugal force (RCF) in g units. (A force of 1 g is equal to the force of gravity at the earth's surface) The following formula relates the RCF to the rotor speed and diameter: RCF = (1.119 x 10-5)* (rpm) 2 * r. whereris the radius of rotation (the radius of the rotor)in cm and rpm is the centrifuge speed in revolutions per minute. The number 1.119 x 10-5 is a conversion factor that allows us to use "rpm" and "g" units. The RCF is dependent upon the radius of the rotor, the speed at which it rotates, and the design of the rotor itself (fixed angle or swinging bucket). Rotor speed and design can be held constant, but the radius will vary from the top of a centrifuge tube to the bottom. If a measurement for the radius is taken as the mid-point, or as an average radius, and all forces are mathematically related to gravity, then one obtains relative centrifugal force, labelled as g. The particles are separated with respect to their molecular weight or saturation coefficient. The two common types of centrifugation are analytical and preparative; the distinction between the two is based on the purpose of centrifugation. Analytical centrifugation involves measuring the physical properties of the sedimenting particles such as sedimentation coefficient or molecular weight. Optical methods are used in analytical ultracentrifugation. Molecules are observed by optical system during centrifugation, to allow observation of macromolecules in solution as they move in gravitational field. The other form of centrifugation is called preparative and the objective is to isolate specific particles which can be reused. There are four basic types of centrifuges viz:

·     Clinical centrifuges –Low cost tabletop centrifuges that can runat a maximum speed of 4000-5000 rpm. These can pellet cells, but not organelles or bio molecules. Two types of rotors are used in it, fixed angle and swinging bucket. The separation can be carried out in 10, 50 or 100 ml tubes.

·     Microfuge - These can typically run at a speed of up to 14,000rpm, sufficient speed to pellet nucleic acids and denatured proteins. Microfuges can be used for small volumes sample of 1-2ml.

·     High speed centrifuges –These operate at maximum speed of25,000 rpm or about 90000g, which is sufficient to pellet cell nuclei and most bio molecules. However they are of little use in isolating ribosome’s and microsomes etc. These are often refrigerated. High speed centrifuges are used in more sophisticated biochemical application. Three types of rotors are available for high speed centrifugation-fixed angle, swinging bucket and vertical rotors.

Ultracentrifuges - It can run at speeds up to 75,000 rpm,sufficient to allow fractionation of bio molecules, for example: plasmid DNA, chromosomal DNA and RNA. It provides 5, 00,000g centrifugal force. The Ultracentrifuge is capable of reaching even greater velocities and requires a vacuum to reduce friction andheating of the rotor. The drive shaft on which rotor is mounted is merely 1/18th of an inch in diameter. Shaft is made up of aluminium or titanium to withstand a great force. Ultracentrifuges are usually refrigerated and are very expensive. It is used for both preparative work and analytical work. The ultra centrifuge can be classified into four types viz: Differential centrifugation, Density gradient centrifugation, Zonal centrifugation and Isopycnic centrifugation. In differential centrifugation separation is carried out in a homogenous suspending medium. This is used to isolate intracellular organelles. However the disadvantage is that the yield is poor and the lighter particle near the heavier particle at the bottom also sediment resulting in contamination. 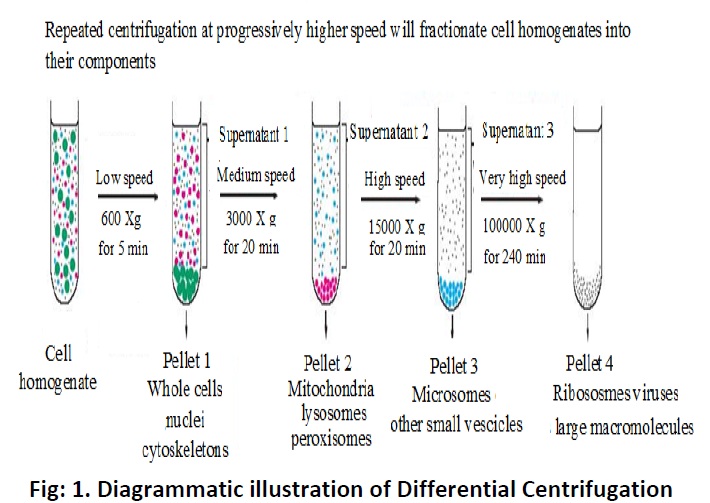 In case of Density gradient centrifugation it employs a medium which has gradient, generally a sucrose density gradient, which is created by gently overlaying lower concentrations of sucrose on higher concentrations in centrifuge tubes. The seperation under centrifugal field is therefore dependent upon the buyont densities of the particle. The particles travel through the gradient until they reach a point at which their density matches with the density of surrounding sucrose. Then the fraction is removed and analyzed. Gradient exert their seperating effect on particle and also eliminate mixing of seperated components due to convention and mechanical vibrations. There are two types in Density gradient centrifuge viz: Rate zonal (fig:2a and 2b) and Isopycnic. In rate zonal centrifugationwhich is also known as band or gradient centrifugation, a density gradient is created in a test tube with sucrose having high density at the bottom. The gradient used here has maximum density below that of least sedimenting particle.The sample particle travel throught the steep gradient and form descreate zones depending upon their sedimentation rate, difference in size and shape.This method is usefull for seperating particle which differ in size but not in density.This is used for seperation of RNA and DNA hybrids and ribosomal subunits. In Isopycnic centrifugation the gradient used has greater densitiy than the most dense sedimenting particles.Here centrifugation is done for prolonged periods at high speed to permit all particle to seek this equilibrium density.It depend solely on the buyont densities of the particle to be seperated and not on their shape or size. Usually caesium chloride Dicoll (high molecular weight sucross polymer and epichlorohydroxy ludox (silica sols) is used as a density gradient material. 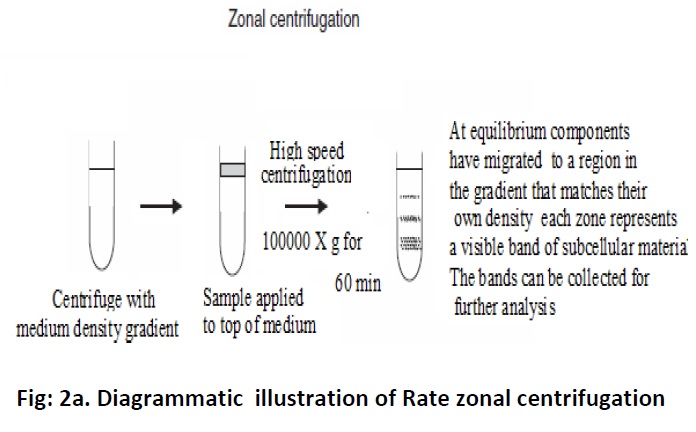 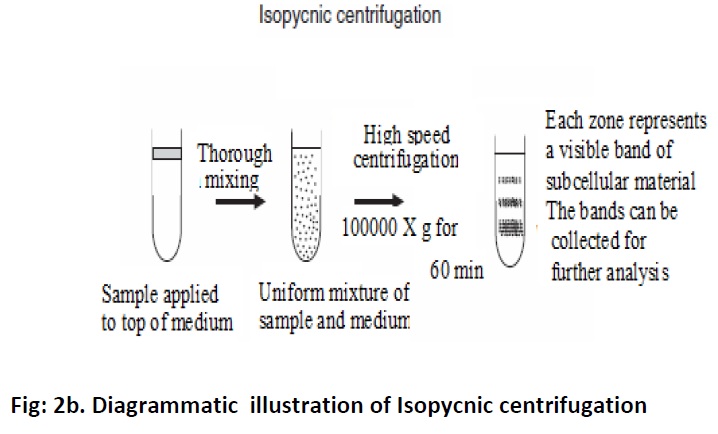