PAIN AND THE INTRAUTERINE SYSTEM

A 30-year-old woman had a levonorgestrel-releasing intrauterine system (IUS) inserted by her general practitioner (GP) 3 weeks ago. Ten days ago she presented to the emergency department with abdominal pain, and on examination the threads were not visible and ultrasound scan suggested the IUS was misplaced in the right uterine cornu. An appoint- ment was made for hysteroscopic resection but

she has presented again in the interim with further pain.

The abdomen is not distended and is soft. There is generalized lower abdominal tender- ness. The threads cannot be visualized on speculum examination. 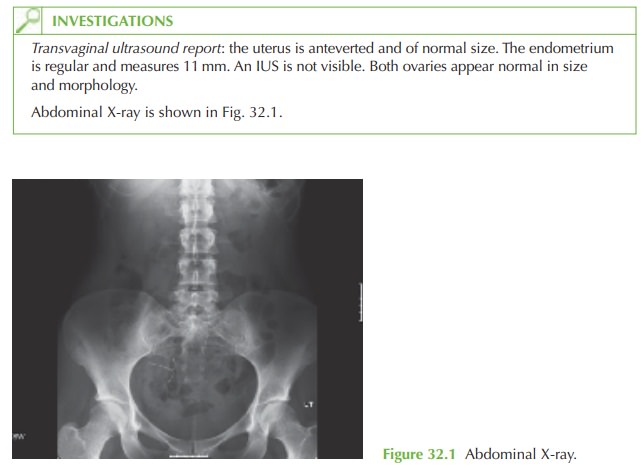 The Plain X-ray shows the IUS in the pelvis but it is lying at a transverse angle in the right pelvis. It is clearly not within the uterus. The current ultrasound result confirms that the uterus is empty. However, the previous report suggested the device was at the uterine cornu. It can be concluded therefore that the device was inserted into the uterus but it has subsequently migrated through the myometrium into the peritoneal cavity. We have no evidence to determine whether or not it was originally placed in the correct position at the fundus.

The only important investigation is a pregnancy test, as the woman is potentially preg- nant since the IUS may not have been effective if it was never in the correct location.

The IUS needs to be retrieved. While it was in the uterus this could have been performed with outpatient hysteroscopic retrieval. However, now a laparoscopy is indicated.

In this case the laparoscopy revealed blood-stained free fluid in the pouch of Douglas, with scarring on the right fundal area of the uterus. The IUS was found covered with omentum in the right lower abdomen. It was easily removed laparoscopically.

As the woman had wanted the IUS for contraception as well as treatment of her menor- rhagia, and as the uterus appeared to have healed, a new IUS was inserted under laparo- scopic guidance at the time. Antibiotics were given to prevent infection.

Once an IUS or IUCD has been inserted, women should be advised to have their GP check the threads are still visible after the first period. Thereafter, most women are willing and able to check the threads themselves.