Questions · What is the differential diagnosis? · Why is she anaemic? · How would you further investi- gate and manage this patient?

A 46-year-old Indian woman presents with a month-long history of increasing abdom- inal pain and a green/yellow vaginal discharge. For the last few days she had been feel- ing feverish and unwell. The pain is across the lower abdomen but worse on the left. She has no urinary symptoms and has been opening her bowels normally. She has a reduced appetite and mild nausea but has not vomited.

She has had two vaginal deliveries in the past and no other pregnancies. She had a lapar- otomy about 4 years ago for drainage of a pelvic abscess. Recently she has been under the care of a gynaecologist for heavy and prolonged periods, for which she is taking cyclical norethisterone. There is no other medical or surgical history of note.

The temperature is 37.8°C, pulse 95/min and blood pressure is 136/76 mmHg. The abdomen appears slightly distended and a mass is palpated arising from the pelvis on the left. There is focal tenderness in the left iliac fossa without rebound tenderness or guard- ing. Speculum examination reveals no discharge or blood, and the cervix appears normal. Cervical excitation and bilateral adnexal tenderness are noted, more marked on the left. 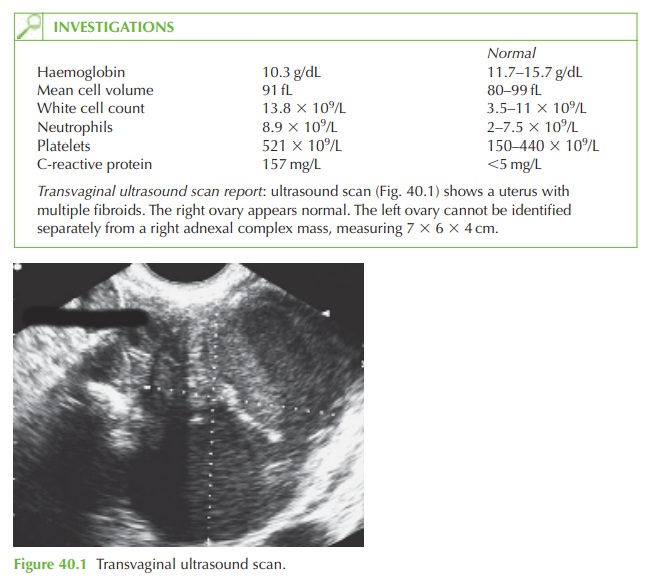 The woman is acutely unwell with pyrexia, tachycardia, raised inflammatory markers, neutrophilia and reactive thrombocythaemia. This suggests an infective process and the left iliac fossa mass detected on ultrasound would appear to be the cause. The likely diag- nosis is a tubo-ovarian mass, probably an abscess.

Alternatively this could potentially be a diverticular abscess or, if it were on the right, an appendix abscess. Ovarian malignancy or another cause of a complex adnexal mass would be unlikely to present with this acute inflammatory episode.

Anaemia in this woman could be due to chronic menorrhagia or anaemia of chronic dis- ease. The increased mean cell volume suggests the latter, but ferritin and folate levels would be useful to see whether there is in fact a degree of iron deficiency too.

Blood cultures and vaginal and endocervical swabs should be taken. Ferritin and folate should be checked.

The woman should be admitted for intravenous antibiotics. Broad-spectrum cover should be given including agents against anaerobes and chlamydia. In cases of pelvic inflamma- tory disease (PID) there is commonly a mixed growth of anaerobes on top of a previous chlamydial infection. If improvement does not occur within 24–48 h, or the diagnosis is unclear, then laparoscopy or laparotomy should be performed to confirm the diagnosis and drain the abscess surgically.