Questions · What is the differential diagnosis? · How would you manage this patient?

A 27-year-old woman complains of left iliac fossa pain. The pain started while she was asleep the night before last and she says it woke her suddenly. Initially the pain was con- stant and severe and she was unable to get out of bed for a few hours. She felt nauseated and did not eat anything all day yesterday. There was no associated bleeding or discharge and there are no bowel or urinary symptoms. Today the pain is still present but much improved and she has been able to have breakfast.

She has had similar episodes twice in the past but they were not as severe or long-lasting. She had never been pregnant and uses the progesterone only pill (POP) for contraception. She has been with her partner for 3 years and has not had any previous sexually transmitted infections. There is no other medical history of note.

The temperature is 37.1°C, heart rate 76/min and blood pressure 122/70 mmHg. The abdomen is slightly distended and tender in the suprapubic and left iliac fossa regions with some rebound tenderness but no guarding. No masses are palpable. Speculum exam- ination is normal and she is tender in the left adnexa on bimanual examination, but no cervical excitation or masses are evident. 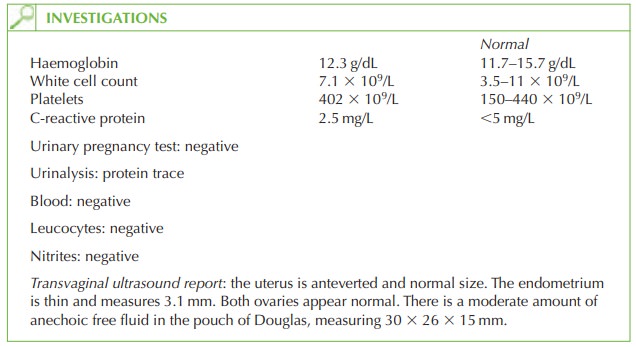 The sudden onset of left iliac pain suggests rupture, haemorrhage or torsion of an ovarian cyst. In cases of torsion of the ovary this would normally result in vomiting and systemic upset, whereas this woman’s condition has in fact improved. In addition, an adnexal mass would be visible on ultrasound. Haemorrhage into a cyst would be seen on transvaginal ultrasound scan as an echogenic ovarian enlargement.

If a cyst ruptures then it is common for the ovary to appear ultrasonographically normal afterwards but the finding of free fluid in the pouch of Douglas suggests the former pathology.

Thus the diagnosis is likely to be a ruptured ovarian cyst. Alternative diagnoses may include irritable bowel syndrome or possibly renal colic, though urinalysis does not show haematuria.

The patient is already improving and the free fluid which is causing the peritoneal irrita- tion (and the rebound tenderness) is expected to resolve spontaneously. Therefore imme- diate management is supportive with analgesia.

In the longer term, the woman should be advised to use a different contraceptive as the POP is known to be associated with an increased incidence of ovarian cysts and it seems from the history that this is the third episode for this woman.