CO2 assimilation proceeds via the dark reaction of photosynthesis

It is relatively simple to isolate chloroplasts with intact envelope from leaves. Upon transfer of these chloroplasts to an isotonic medium containing an osmoticum, a buffer, bicarbonate, and inorganic phosphate, and the light is switched on, the generation of oxygen can be observed.

CO2 assimilation proceeds via the dark reaction of photosynthesis

It is relatively simple to isolate chloroplasts with intact envelope from leaves. Upon transfer of these chloroplasts to an isotonic medium containing an osmoticum, a buffer, bicarbonate, and inorganic phosphate, and the light is switched on, the generation of oxygen can be observed. By the action of light water is split and oxygen evolved, and the resulting reducing equivalents are used for CO2 assimilation (Fig. 6.1,). There is no oxygen evolution with intact chloroplasts in the absence of CO2 or phosphate, demonstrating that the light reaction in the intact chloroplasts is (a) coupled to CO2 assimilation and (b) the prod­ uct of this assimilation contains phosphate. The main assimilation product of the chloroplasts is dihydroxyacetone phosphate, a triose phosphate. Figure 6.2 showsthat the synthesis of triose phosphate from CO2 requires energy as ATP and reducing equivalents as NADPH, which have been provided by the light reaction of photosynthesis. The reaction chain for the forma­ tion of triose phosphate from CO2, ATP, and NADPH was formerly called the dark reaction of photosynthesis, as it requires no light per se and theore­ tically it should also be able to proceed in the dark. The fact is, however, that in leaves this reaction does not proceed during darkness, since some of the enzymes of the reaction chain, due to regulatory processes, are active only during illumination . 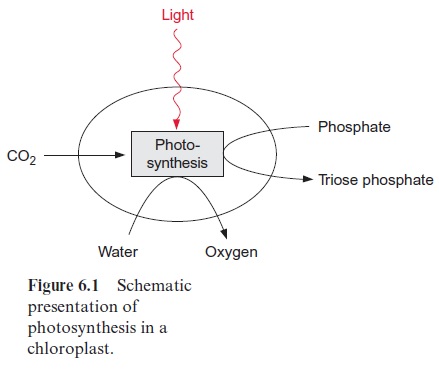 Between 1946 and 1953 Melvin Calvin and his collaborators Andrew Benson and James Bassham, in Berkeley, California, resolved the mechanism of photosynthetic CO2 assimilation. In 1961 Calvin was awarded the Nobel Prize in Chemistry for this fundamental discovery. A prerequisite for the elucidation of the CO2 fixation pathway was the discovery of the radioactive carbon isotope 14C in 1940, which, as a by-product of nuclear reactors, was available in larger amounts in the United States after 1945. Calvin chose the green alga Chlorella for his investigations. He added radioactively labeled CO2 to illuminated algal suspensions, killed the algae after a short incuba­ tion period by adding hot ethanol, and used paper chromatography to ana­ lyze the radioactively labeled products of the CO2 fixation. By successively shortening the incubation time, he was able to show that 3-phosphoglycerate was synthesized as the first stable product of CO2 fixation. More detailed studies revealed that CO2 fixation proceeds by a cyclic process,which has been named the Calvin cycle after its discoverer. This name derives from the fact that a reduction occurs and pentoses are formed in the cycle. 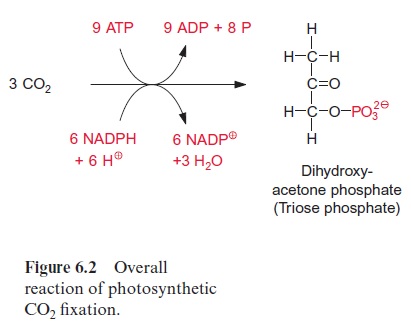 The Calvin cycle can be subdivided into three sections:

1.  The carboxylation of the C5 sugar ribulose 1,5-bisphosphate leading to the formation of two molecules 3-phosphoglycerate;

2.  The reduction of the 3-phosphoglycerate to triose phosphate; and

3.  The regeneration of the CO2 acceptor ribulose 1,5-bisphosphate from triose phosphate (Fig. 6.3). 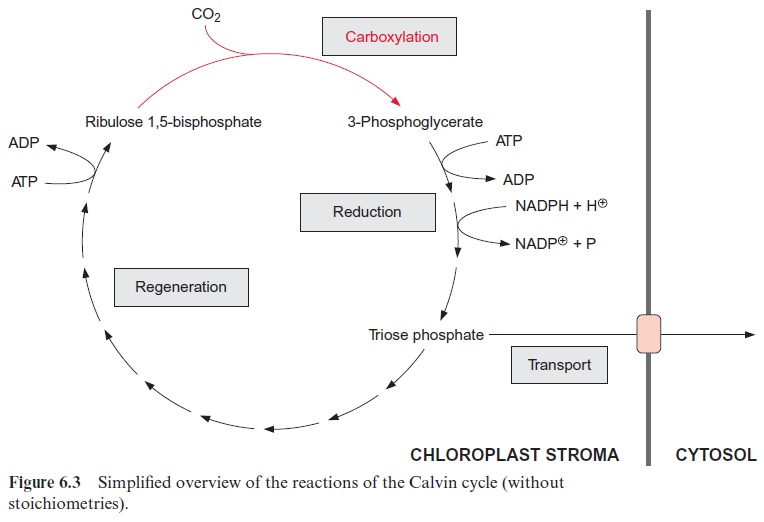