The reduction of 1,3-bisphosphoglycerate to D-glyceraldehyde 3-phos­ phate is catalyzed by the enzyme glyceraldehyde phosphate dehydrogenase (Fig. 6.9). The carboxylic acid phosphoanhydride reacts with an SH-group of a cysteine residue in the active center of the enzyme to form a thioester intermediate with the release of the phosphate group (Fig. 6.10). The free energy for the hydrolysis of the thioester so formed is similarly high to that of the anhydride (“energy-rich bond”). When a thioester is reduced, a thio-semiacetal is formed which has low free energy. 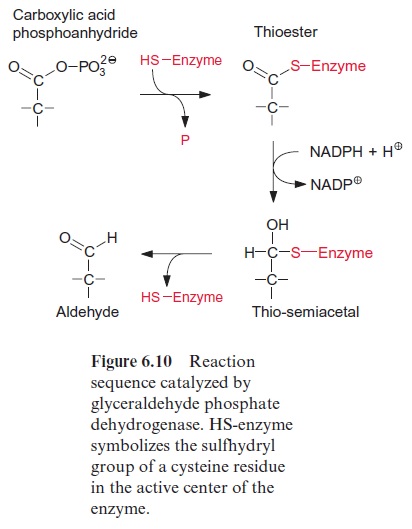