The key reaction for photosynthetic CO2 assimilation is the binding of atmospheric CO2 to the acceptor ribulose 1,5-bisphosphate (RuBP) to syn­ thesize two molecules of 3-phosphoglycerate.

The key reaction for photosynthetic CO2 assimilation is the binding of atmospheric CO2 to the acceptor ribulose 1,5-bisphosphate (RuBP) to syn­ thesize two molecules of 3-phosphoglycerate. The reaction is very exer­ gonic ( ∆Go -35 kJ/mol) and therefore virtually irreversible. It is catalyzed by the enzyme ribulose bisphosphate carboxylase/oxygenase (abbreviated RubisCO). It is also called oxygenase because the same enzyme also catalyzes a side-reaction in which the ribulose bisphosphate reacts with O2 (Fig. 6.4). 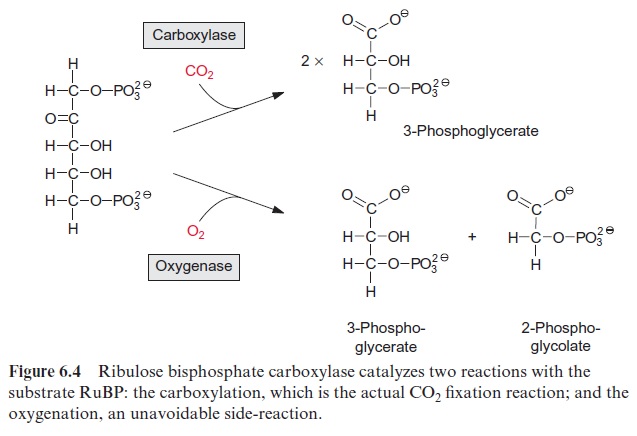 Figure 6.5 shows the reaction sequence of the carboxylase reaction. Keto-enol isomerization of RuBP yields an enediol, which reacts with CO2 to form the intermediate 2-carboxy 3-ketoarabinitol 1,5-bisphosphate, which is cleaved to two molecules of 3-phosphoglycerate. In the oxygenase reac-tion, an unavoidable by-reaction, probably O2, reacts in a similar way as CO2 with the enediol to form a peroxide as an intermediate. In a subsequent cleavage of the O2 adduct, one atom of the O2 molecule is released in the form of water and the other is incorporated into the carbonyl group of 2-phosphoglycolate (Fig. 6.6). The final products of the oxygenase reaction are 2-phosphoglycolate and 3-phosphoglycerate. 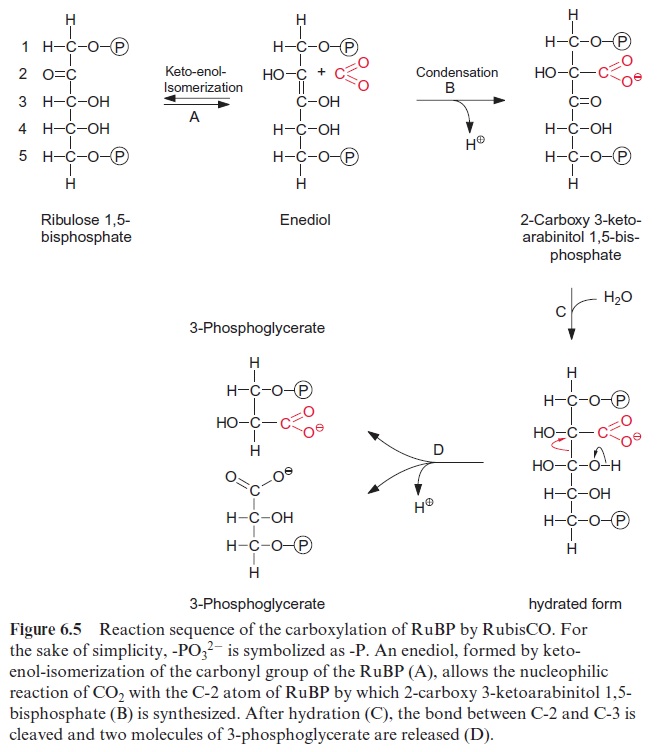 Ribulose bisphosphate-carboxylase/oxygenase is the only enzyme that enables the fixation of atmospheric CO2 for the formation of biomass. This enzyme is therefore a prerequisite for the existence of the present life on earth. In plants and cyanobacteria it consists of eight identical large subu-nits (depending on the species of a molecular mass of 51–58 kDa) and eight identical small subunits (molecular mass 12–18 kDa). With its 16 subunits, RubisCO is one of the largest enzymes in nature. In plants the genetic infor­ mation for the large subunit is encoded in the plastid genome and for the small subunit in the nucleus. Each large subunit contains one catalytic center. The function of the small subunits is not yet fully understood. It has been suggested that the eight small subunits stabilize the complex of the eight large subunits. Apparently the small subunit is not essential for the process of CO2 fixation per se. RubisCO occurs in some phototrophic purple bacteria as a dimer of only large subunits, but the catalytic proper­ ties of the corresponding bacterial enzymes are not basically different from those in plants. The bacterial enzymes consisting of only two large subunits, however, exhibit a higher ratio of oxygenase versus carboxylase activity than the plant enzymes, which consist of eight large and eight small subunits. 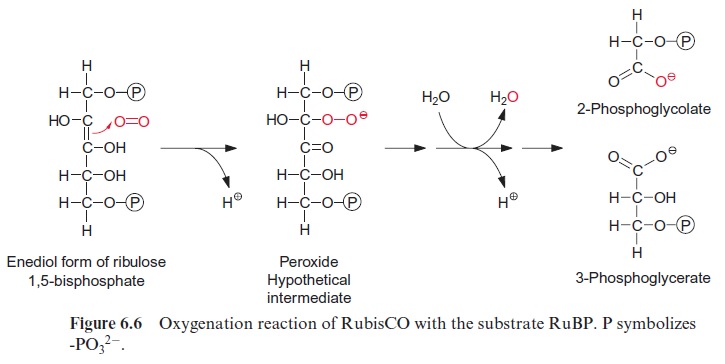 The oxygenation of ribulose bisphosphate: a costly side-reaction

That recycling of the by-product 2-phos­ phoglycolate, produced in very large amounts, is a very costly process for plants. This recycling process requires a metabolic chain with more than 10 enzymatic reactions distributed over three different organelles (chloroplasts, peroxisomes, and mitochondria), as well as very high energy consumption.

Apparently evolution has not been successful in eliminating this costly side-reaction of ribulose bisphosphate carboxylase. The ratio of the carboxy­ lase and oxygenase activities of RubisCO is only increased by a factor of less than two when enzymes of cyanobacteria and of higher plants are compared. It seems as if the evolutionary refinement of a key process of life has reached its limitation due to the chemistry of the reaction. It is speculated that the early evolution of the RubisCO occurred at a time when there was no oxy­ gen in the atmosphere. A comparison of the RubisCO proteins from differ­ ent organisms leads to the conclusion that this enzyme was already present about three and a half billion years ago, when the first chemolithotrophic bacteria evolved. When more than one and a half billion years later, due to photosynthesis, oxygen appeared in the atmosphere in higher concentrations, the RubisCO protein probably had reached such a complexity that it was no longer possible to change the catalytic center to eliminate the oxygen­ ase activity. Experimental results support this conception. A large number of experiments, in which genetic engineering was employed to obtain site-specific amino acid exchanges in the region of the active center of RubisCO, were unable to improve the ratio between the activities of carboxylation and oxygenation. The only chance of lowering oxygenation by molecular engi­ neering may lie in simultaneously exchanging several amino acids in the cat­ alytic binding site of RubisCO, which would be an extremely unlikely event in the process of evolution.

The catalysis of the carboxylation of RuBP by RubisCO is very slow (Table 6.1): the turnover number for each subunit amounts to 3.3 s -1. This implies that at substrate saturation only about three molecules of CO2 and RuBP are converted per second at one catalytic site of RubisCO. In comparison, the turnover numbers of dehydrogenases and carbonic anhydrase are in the order of 103 s -1 and 105 s -1, respectively. Because of the extremely low turno­ ver number of RubisCO, very large amounts of enzyme protein are required to catalyze the fluxes necessary for photosynthesis. RubisCO can account for 50% of the total soluble proteins in leaves. The wide distribution of plants makes RubisCO by far the most abundant protein on earth. The con­ centration of the catalytic large subunits in the chloroplast stroma is as high as 4–10 x10 -3 mol/L. A comparison of this value with the aqueous con­ centration of CO2 in equilibrium with air (at 25°C about 11 x10 -6 mol/L) shows the abnormal situation in which the concentration of an enzyme is up to 1,000 times higher than the concentration of its substrate CO2 and at a similar concentration as its substrate RuBP. 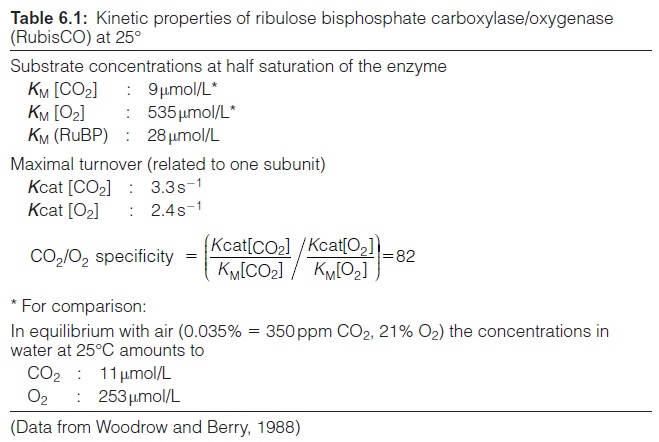 All the large subunits of RubisCO contain a lysine in position 201 of their 470 amino acid long sequence. RubisCO is active only when the e-amino group of this lysine reacts with CO2 to form a carbamate (carbonic acid amide), to which an Mg++ ion is bound (Fig. 6.7). The activation is due to a change in the conformation of the protein of the large subunit. The active conformation is stabilized by the complex formation with Mg++ . This car­ bamylation is a prerequisite for the activity of all known RubisCO proteins.

It should be noted that the CO2 bound as carbamate is different from the CO2 that is a substrate of the carboxylation reaction of RubisCO.

The activation of RubisCO requires ATP and is catalyzed by the enzyme RubisCO activase. The noncarbamylated, inactive form of RubisCO binds RuBP very tightly, resulting in the inhibition of the enzyme. Upon the con­ sumption of ATP, the activase releases the tightly bound RuBP and thus enables the carbamylation of the free enzyme. 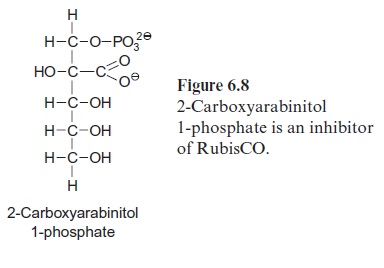 RubisCO is inhibited by several hexose phosphates and by 3-phospho­ glycerate, which all bind to the active site instead of RuBP. A very strong inhibitor is 2-carboxyarabinitol 1-phosphate (CA1P) (Fig. 6.8). This com­ pound has a structure very similar to that of 2-carboxy 3-ketoarabinitol 1,5-bisphosphate (Fig. 6.5), which is an intermediate of the carboxylation reaction. CA1P has a 1,000-fold higher affinity to the RuBP binding site of RubisCO than RuBP. In a number of species, CA1P accumulates in the leaves during the night, blocking a large number of the binding sites of RubisCO and thus inactivating the enzyme. During the day, CA1P is released by RubisCO activase and is degraded by a specific phosphatase, which hydrolyzes the phosphate residue from CA1P and thus eliminates the effect of the RubisCO inhibitor. CA1P is synthesized from fructose 1.6-bisphosphate with the intermediates hexosephosphates hamamelose bisphosphate and hamamelose monophosphate. Since CA1P is not formed in all plants, its role in the regulation of RubisCO is still a matter of debate.