The World Health Organization (WHO) grading system assigns grades I–IV, with grade IV tumors the most aggressive. While grade IV glioblastoma patients usually succumb to disease within a year, other patients with treatable grade IV tumors may survive 5 years. Metastasis of CNS tumors is rare.

•         Pilocytic astrocytoma is a well-differentiated, benign astrocytic tumor that arises throughout the neuraxis; it is common in children and young adults. It is the most common benign CNS tumor in children.

•         Sites of involvement include posterior fossa (cerebellum) and diencephalon

Radiographically, most show cystic lesion with a mural nodule

Activating mutations in BRAF are common

•         Fibrillary (diffuse) astrocytoma is a low-grade tumor that arises in the cerebral hemisphere of young to middle-aged adults and the brainstem of children.

•         Glioblastoma is the most common CNS primary malignancy in adults. 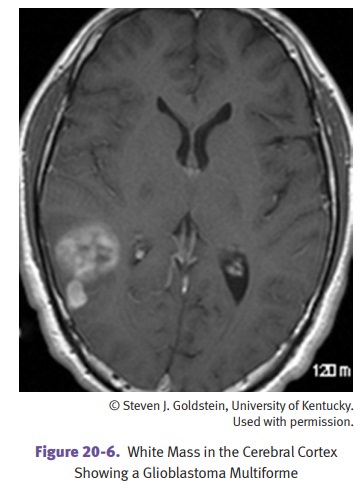 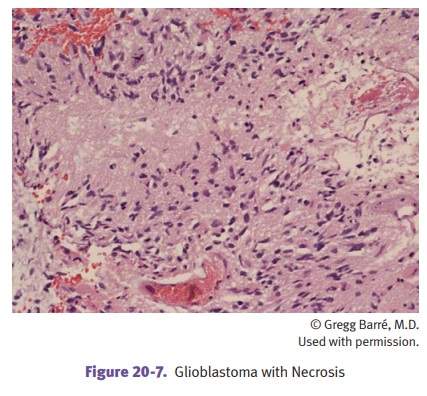 The prognosis of astrocytomas varies.

Oligodendroglioma occurs more often in adults than in children. Its cortical location may cause seizures. Histologically, perinuclear halos are a fixation artifact that is not seen on frozen section. This tumor is slow-growing. Tumors with deletions of 1p and 19q respond well to therapy.

Ependymoma is typically located in the fourth ventricle in children, where it presents with obstructive hydrocephalus. In adults the spinal cord is the most common site. Pseudorosettes are a helpful diagnostic feature on microscopic study. Multifocality in the spinal cord is associated with NF2. The prognosis depends on tumor location and adequacy of resection.

Embryonal (primitive) tumors are a group of small round cell tumors that occur predominantly in children. In the cerebellum, they are called medulloblastoma.

•         Medulloblastoma is the most common malignant brain tumor in children.

•         Molecular subgroupings are proving useful for prognosis; Wnt subgroup has the best prognosis.

Tumors of Cranial and Paraspinal Nerves

Schwannoma originates from Schwann cells of cranial or spinal nerves. The most frequent location is on CN 8 at the cerebellopontine angle (CPA). Schwannoma manifests characteristically with unilateral loss of hearing and tinnitus. The prog-nosis is good after surgical resection.

Tumors of the Meninges

Meningioma is a tumor that originates from meningothelial cells of the arachnoid. It is common in adults (women > men) and rare in children. It is a dura-based mass that can recur if the brain has been invaded, but invasion is unusual. It has varied clinical features but commonly presents with headache, seizures, and neurological deficits.

•         Histology shows cellular whorls and psammoma bodies. Many patterns are seen; the syncytial pattern is common.

The prognosis of meningioma is good, though tumors in some locations may not be amenable to complete resection. 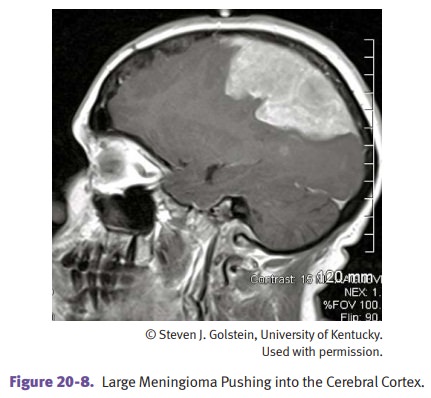 Tumors of the Sellar Region

Craniopharyngioma arises from rests of odontogenic epithelium within the suprasel-lar/diencephalic region. It most commonly affects children and young adults. The most common presenting symptoms are headache, hypopituitarism, and visual field disturbances.

•         Histology shows squamous cells and resembles adamantinoma, a bone tumor of unknown histological origin that is the most common tumor of the tooth

•         Lymphomas are the most common CNS tumors in the immunosuppressed. Primary CNS lymphomas may be multiple, unlike other histologic types. They do not respond well to chemotherapy.

•         Germ cell tumors are more common in children than adults. The germinoma is the most common histologic type. It resembles the seminoma of the testis and the dysgerminoma of the ovary; the cells are large with a prominent nucleolus. These tumors are radiosensitive.

About 25–50% of all CNS tumors are metastatic tumors from sources outside the CNS. Carcinomas are the most common.